New Delhi: In Himachal Pradesh, the Congress is leading on 37 seats (majority mark is 35), and the BJP has won one seat with Chief Minister Jairam Thakur winning in Seraj while the party is leading on 27 seats.

Looking at a possible win, the Congress has put All India Congress Committee (AICC) secretaries on duty to stop the MLAs from deflecting. The Congress has started preparing to take its soon-to-be elected MLAs to a “safe place”, sources said.

Congress leaders Deepender Singh Hooda, Bhupesh Baghel, and In Charge Rajiv Shukla will go to Himachal. The MLAs will likely be taken to a hotel in Mohali, as per sources.

On the other hand, sources said BJP General Secretary Vinod Tawde is holding a meeting with CM Jairam Thakur. The discussion is likely about the state election results and the party’s future strategy as the contest has so far been a close one.

Earlier in the day, trends showed the ruling BJP and Congress tie or attain a very close lead against each other. Meanwhile, the AAP has not been able to secure a lead in any seat. 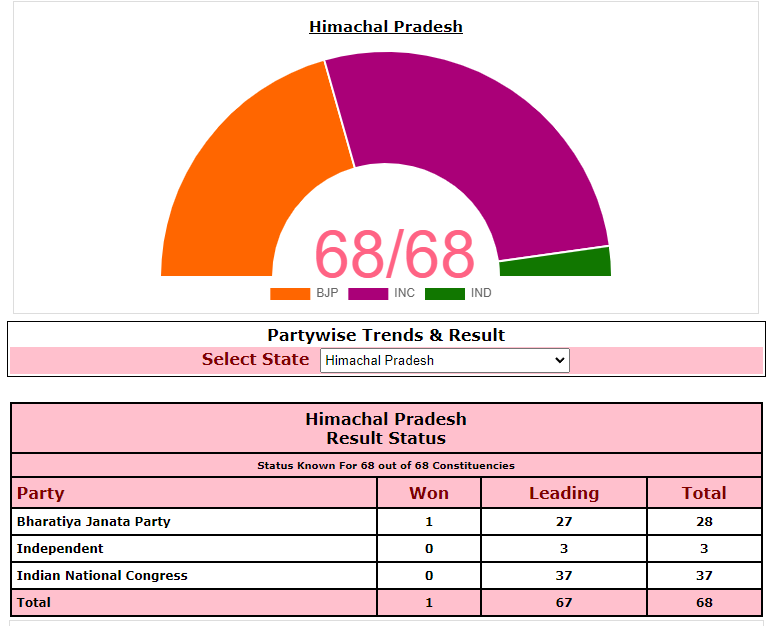 In the case of a tie or either party failing to secure a majority, independents would play the role of kingmakers in enabling either side to form the government in Himachal. Independent candidates KL Thakur and Hiteshwar Singh were leading in Nalagarh and Banjar Assembly constituencies, respectively, ANI reported.

ABP-CVoter Exit Poll Results 2022 for Himachal Pradesh suggest that BJP will be able to retain the hill state with 33 to 41 assembly seats coming in their kitty, which means they will be just two short of the majority even if they get only the minimum seats projected. Congress will be breathing down BJP’s neck but the projected seat range (24 to 32 assembly seats) suggest that it will not be enough to get over the hump — three short of the majority even if they get the maximum seats projected.

With independents pegged to get 0 to 4 seats, they are set to play a big role in both scenarios, as has been the case in the past in Himachal.

BJP vs Congress In Himachal Pradesh

For the opposition Congress, a victory in Himachal is much-needed for its revival, as it has seen a spate of electoral losses in the last few years.

Himachal Pradesh has not returned any incumbent government to power in the last nearly four decades.

The Congress has expressed confidence in the party winning the assembly polls, saying the voters will decide on the fundamental issues of price rise, joblessness, the old pension scheme, and other challenges of life they have been facing.

The opposition party which holds power of its own only in Rajasthan and Chhattisgarh, hopes that the party’s revival will start from Himachal Pradesh.

The results will also throw up if the entrant Aam Aadmi Party, which carried out a muted campaign for the November 12 elections, has been able to make any mark in the hill state in its bid to expand its base.

Counting of votes began at 8 am at 68 counting halls spread across 59 locations throughout the state with the taking up of postal ballots first.

After a gap of 30 minutes from the commencement of counting of postal ballot papers, counting of votes for electronic voting machines (EVMs) commenced at 8.30 am.

The EVM counting will continue irrespective of the stage of postal ballot counting, the Election Commission stated.

The commission has made elaborate arrangements for the counting of votes with more than 10,000 security personnel, returning officers, and other support staff overseeing the counting process for the 68 assembly constituencies in Himachal Pradesh.

About 76.44 per cent of voters had exercised their franchise in the assembly polls held on November 12.