As many Pandits demanded adequate security from the J&K administration, the police had to resort to fire tear gas shells to disperse protesters and prevent them from moving towards the Budgam airport.

A day after a 36-year-old Kashmiri government employee Rahul Bhat was gunned down by terrorists in Kashmir’s Budgam district, members of the Kashmiri Pandit community protested at Sheikhpora, Budgam against the killing. As many Pandits demanded adequate security from the J&K administration, the police had to resort to fire tear gas shells to disperse protesters and prevent them from moving towards the Budgam airport, reported news agency ANI,

“If the Administration can lathicharge and fire tear gas the public, then could they not have caught the terrorist yesterday?” asked one of the protesters Aparna Pandit. Failing to provide adequate security to Kashmiri Pandit employees in the valley will result in mass resignation, warned one of the protesters. Candlelight marches were held on Thursday night at several places to protest the killing of the Chadoora Tehsil office employee in broad daylight.

Rahul Bhat, who had got the job of a clerk ten years ago under a special package designed for Kashmiri migrants, was gunned down inside the Tehsil office in Chadoora town as terrorists opened fire.

On Thursday, locals gathered at his residence on the outskirts of Jammu to mourn his death. As the family of the deceased waited for the return of his mortal remains, his father demanded a probe to identify the perpetrators of the heinous crime.

“His body should be returned immediately and an inquiry ordered into the incident to identify all those who are involved in his cold-blooded murder,” his father Bita Bhat told news agency PTI.

“I was at a hospital accompanying my ailing brother when a family friend called from Kashmir and informed me about the incident. I tried to contact the deputy commissioner of Budgam and the concerned police officers but my calls went unanswered,” the father told reporters.

He said that if an employee is killed in broad daylight while he is working, then no one is safe in the valley.

“If a person is shot inside his office, nobody is safe in the valley…when such a thing has happened it is a glaring example of the government’s failure. Those serving (among the Kashmiri Pandits) there are doing it at their own risk as the government has failed to provide security to them,” he said.

Tears rolled down her cheeks as Rahul Bhat’s mother Babli asked the government to “return” her son. A relative of Bhat also broke down before the media. “They have taken our children for dying there and not for jobs.”

Bhat is survived by his parents, wife and a minor daughter. His wife and daughter were putting up with him at Sheikhpora migrant colony in Budgam district.

“We have risked our lives and returned to Kashmir with a hope to rebuild a connection with our roots,” he said, as he tried to console the bereaved family members.

Rahul Bhat is the third Kashmiri Pandit to be killed in the valley in the last six months. According to the police, a terror outfit called Kashmir Tigers has claimed responsibility for Bhat’s killing.

Politicians cutting across party lines condemned the killing and demanded stern action against the perpetrators of violence.

“The coward Pakistani terrorists have once again bled the Kashmir by the cold-blooded murder of Bhat…those behind the killings will not be spared and will be eliminated by our security forces,” J&K BJP president Ravinder Raina said. 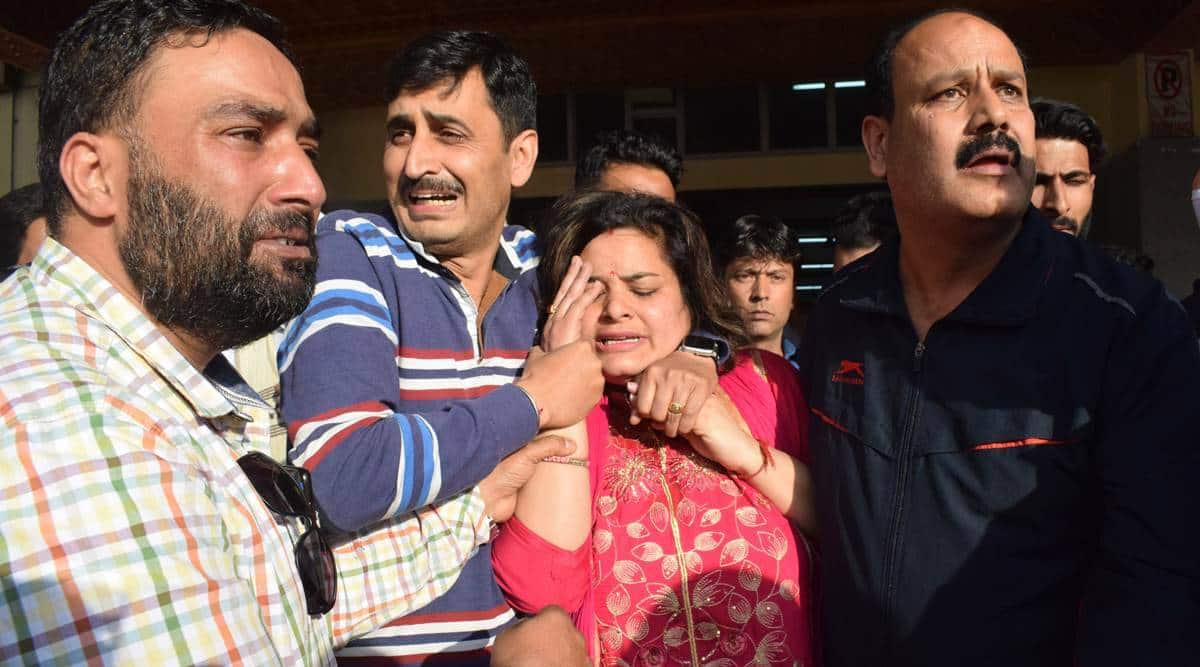