Rahul Gandhi said Congress wanted proper distribution of resources for everyone, which it had ensured when in power in the past

Congress leader Rahul Gandhi on Tuesday accused Prime Minister Narendra Modi of creating two Indias, one for the rich and another for the poor, and claimed that the resources of the country are being given to a few wealthy people. Launching his party’s campaign for this year’s Gujarat Assembly elections at an “Adivasi satyagrah rally’ in tribal-dominated Dahod district, Gandhi said he was confident that Congress will come to power in the state.

This is the first public rally of the Congress party in Gujarat in the run-up to the 2022 state elections, due in December.
“In 2014, Narendra Modi ji became the prime minister of India. Before that, he was the chief minister of Gujarat. The work he started in Gujarat, he is doing in the country. It is called the Gujarat Model,” Gandhi said.

“Today, two Indias are being created, one India of the rich, a few select people, billionaires and bureaucrats who have power and money. The second India is of the common people,” he said. The Congress party does not want two Indias but equality for everyone, he said.

Gandhi said Congress wanted proper distribution of resources for everyone, which it had ensured when in power in the past.
“In the BJP model, people’s resources such as water, forest and land which belong to tribals and other poor people, are being given to a few,” he said.

The Congress leader also said that the BJP-led government in Gujarat had deprived tribals of their rights. “The BJP government will not give you anything, but take away everything from you. You (tribals) have to snatch your rights and then only you will get what is yours,” he said.

Gandhi said that tribal people worked hard to build roads, bridges, buildings and infrastructure in Gujarat but didn’t get anything in return, including good education and health service. He also slammed PM Modi over handling the coronavirus pandemic in the country.

“During the pandemic, the prime minister told you to bang pots and pans (from balconies) and flash your mobile lights when three lakh people died in Gujarat. The Ganga river was filled up with bodies. Between 50 to 60 lakh people died in the country due to coronavirus,” he alleged. “You did not get oxygen, you did not get medicine, you were treated outside hospitals as no space was available and they told you to bang pots and pans,” Gandhi said.

He alleged that only a few people run the Central government and the people are silent and scared. “For 24 hours, the media keeps distracting, showing the photo of Narendra Modi, or any actor, actresses, but will say nothing about the truth,” he said.
Referring to the three-month jail sentence handed to independent MLA Jignesh Mevani for holding a protest March, Gandhi said, “It is only in Gujarat that you can be sentenced to jail for protesting.” “There are lakhs of youth like Jignesh Mevani who understand truth. Who knows about the Gujarat model of Narendra Modi? I would like to tell them that there is a need for a new Gujarat. It is a matter of your future. You want jobs, education, and health which they will not provide to you. They only know to sell your future to a few billionaires,” the former Congress president said.

“The youth of Gujarat, whether they are Adivasis, Dalits, you will have to fight together. Congress party is with you 24 hours,” he said. Gandhi also said that Congress wanted to revive the old “cooperative model”, which he described as the “model of the people” and “of Amul where the voice of the public runs the government”. He promised the immediate withdrawal of the controversial Par-Tapi river link project if his party is voted to power.”

“Here, large statues, Tapi river link projects are made, and your water is snatched away from you and given to the billionaire, and you get no benefit. I want to tell you clearly that once the Congress party wins an election here, we will scrap the river link project,” Gandhi said.

The Congress leader further said “jal, jungle, and jameen” do not belong to a handful of industrialists but the people of the country, and also spoke about the erstwhile UPA government’s commitment to take benefits to the people through PESA, NREGA, and Land Acquisition Act.

“PM Modi had mocked MNREGA in Parliament, saying he wants to scrap it but will not do so to remind the country of what Congress did. Had MNREGA not been around during COVID-19, you know what would have happened to the country. The BJP is running the same programme today,” he said.

Gandhi also spoke about the works done by the Congress governments in Rajasthan and Chhattisgarh and said that the party will fulfil the promises once it forms a government in Gujarat. 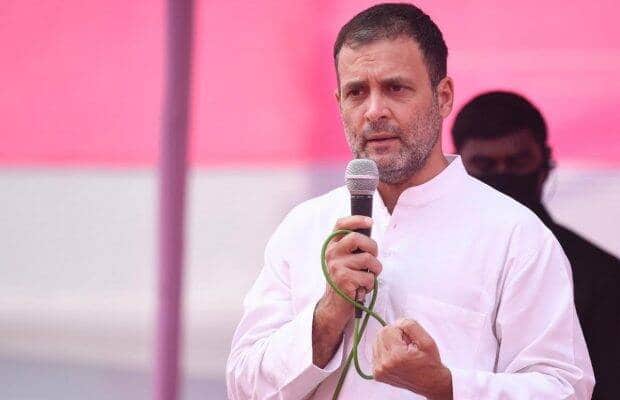