The choice of Lee, who served on the police force for more than three decades before joining the security ministry, epitomizes China’s focus on national security

Hong Kong formally confirmed John Lee as its next top leader after an uncontested election, solidifying an era of more direct Chinese political control over the once-freewheeling financial hub.

Lee, 64, won 1,416 votes from some 1,460 electors on Sunday, according to the returning officer at the election venue, the Hong Kong Convention and Exhibition Centre. That is more than the simple majority needed to confirm his appointment. He will start his five-year term as Chief Executive on July 1, succeeding Carrie Lam, who last month announced her decision not to run.

Lee, who earlier served as chief secretary for administration, the city’s No. 2 position, was the only candidate put forward to an election committee reformed by Beijing in 2021 to stack more pro-establishment members. Vote counting was completed in an hour on Sunday, with almost 98% turnout.

Sunday’s ballot was the city’s first to be held in more than two decades without at least a nominal contest, China’s political overhauls in the city last year made it all but impossible for an opposition candidate to compete and the Communist Party’s endorsement of Lee rendered his victory a fait accompli.

Lee appeared to be in a good mood on Sunday, greeting voters with elbow bumps or a traditional Chinese courtesy, slightly bowing with both hands clasped together. Election committee members also seemed relaxed, many of them posing for group photos.

The choice of Lee, who served on the police force for more than three decades before joining the security ministry, epitomizes China’s focus on national security after a wave of massive and sometimes-violent democracy protests in 2019. Lee helped lead Lam’s crackdown on the demonstrations and implement a powerful Beijing-drafted national security law that’s resulted in the arrest of some 182 people and the closing of at least a dozen news organizations.

Lee has reiterated Lam’s pledge to enact additional security legislation, known as Article 23, which was shelved in 2003 after massive demonstrations. He has indicated he’ll continue Lam’s signature land development projects — Northern Metropolis and Lantau Tomorrow — as he attempts to tackle the city’s housing crisis, an issue that China blames for fueling public discontent.

The policies did not impress Tik Chi-yuen, founder of the centrist Third Side party and a election committee member. Tik told reporters on Sunday that Lee’s platform seemed “empty” and fell short of Third Side’s expectations. However, he said he’d still cast a vote for Lee in a gesture of goodwill and show that parties of different opinions can come together and solve Hong Kong’s problems.

There was barely any dissent visible in the city with public gatherings of more than four people still banned due to Covid restrictions and critical speech heavily penalized under the National Security Law. Three activists from the League of Social Democrats protested in the Wanchai neighborhood before being stopped about one block away from the polling venue.

Before Hong Kong’s political elites pick the next city leader, 3 activists from the League of Social Democrats held a lone public protest.

“Power to the people, universal suffrage now,” they chanted as they marched to the voting venue amid heavy police presence.

Ronny Tong, a member of the Executive Council, said that while the election was a one-man show, it was important for the public to respect the system. He called on Lee to form a more inclusive administration with different voices, which will help Hong Kong recover from the difficulties it has faced in the last three years.

Tong said Lee should focus on priorities such as recovering from the Covid-19 pandemic, housing and gaining the support of young people.

“I think it’s very important that we should get the entire community together so that we all have a common goal before we can tackle difficult questions like political reform,” Tong said.

Regina Ip, another Executive Council member and pro-Beijing lawmaker, said that Lee’s immediate task should be to facilitate the reopening of the city’s borders with mainland China.

“You know, our linkage with the mainland is supremely important,” Ip told reporters. “He must move to tackle a lot of our deep-rooted problems, like land and housing shortage, our development of the Northern Metropolis to strengthen our convergence with Mainland China.”

With the reformed electoral system, the 2022 Hong Kong Chief Executive election is expected to become the norm for the future, said Stanley Ng, a National People’s Congress deputy and a city lawmaker. 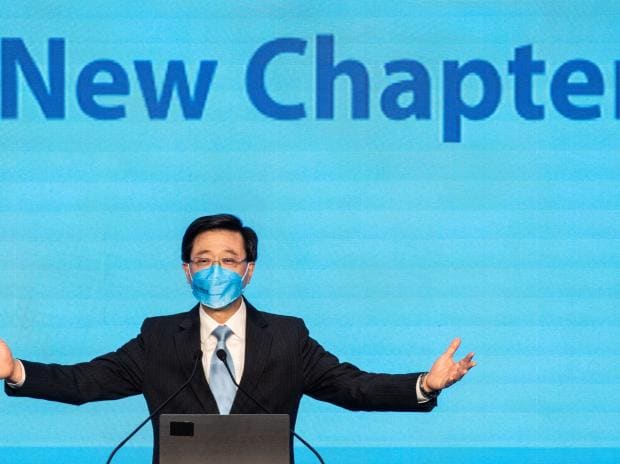