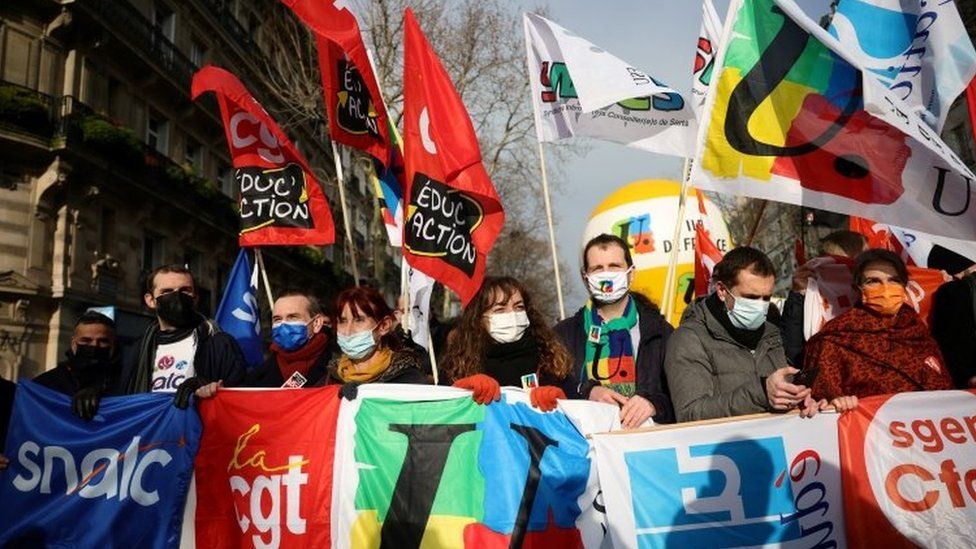 Schools have shut across France as teachers stage a mass strike in protest against the government’s handling of the coronavirus crisis.

French ministers have made keeping schools open a priority, despite a recent surge in Covid-19 cases, fuelled by the Omicron variant.

The government said almost 40% of primary teachers and 24% of secondary teachers had walked out on Thursday.

But those figures were well below estimates by unions, which said they expected about 75% of primary teachers to go on strike.

The top Snuipp-FSU union said it expected one in two primary schools to close on Thursday in a “historical mobilisation” of teachers on a scale not seen in decades.

The nationwide strike was organised by 11 unions representing teachers, parents and other school staff.

In cities across France on Thursday, teachers took to the streets to vent their anger at the government’s Covid policies.

“We had reached such a level of exasperation, tiredness, and anger that we didn’t have any other option but to organise a strike to send a strong message to the government,” said Elisabeth Allain-Moreno, national secretary of the SE-UNSA teachers union.

Some parents said they sympathised with and held no grudge against teachers who had walked off the job.

Outside a school in north-east Paris, one parent, Akim Aouchiche, told the AFP news agency that “classes are too big, they don’t get paid enough, their working conditions aren’t the best”.

The unions said the government and the education minister, Jean-Michel Blanquer, were to blame for what they called a “chaotic situation” in schools.

The main trigger for the strike was France’s health protocol, which has been changed a number of times since December.

Under rules announced on 2 January, a day before the start of the new school year, students exposed to a Covid case were required to take an antigen or PCR test and then self-test two and then four days later to continue classes in person.

In response to this huge demand, the government this week eased rules on Covid checks for students.

On Monday, French Prime Minister Jean Castex said students will be allowed to do self-tests instead of a PCR if one of their classmates tested positive.

But the relaxation has caused concerns for the safety of teachers as France reported a record 368,149 new coronavirus cases on Tuesday.

The unions say they the government’s lack of communication, frequent changes to testing, and insufficient protection against Covid has left them unable to teach properly.

But the government has defended its policies, which it says are necessary to keep schools open.

“I know it’s tough, but a strike does not solve problems. One does not strike against a virus,” the education minister, Mr Blanquer, told BFM TV.

The strike comes at a politically awkward time for French President Emmanuel Macron, who is expected to seek a second term in an April election.

His rivals have capitalised on the strike to criticise Mr Macron.

“I feel the enormous pain both of the school community and especially of parents,” conservative candidate Valerie Pecresse told French TV.