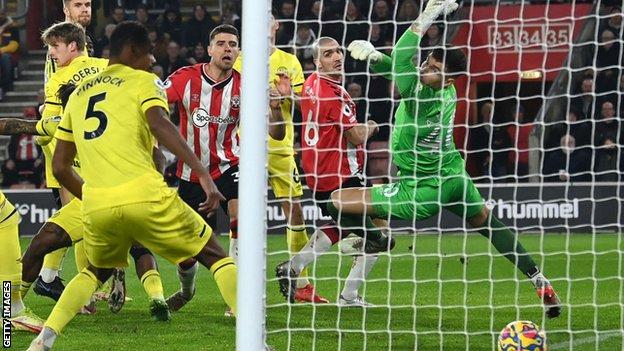 Southampton comfortably beat Brentford to move up to 11th in the Premier League – in front of the Saints’ new owner Dragan Solak.

Jan Bednarek gave the hosts the early lead when he glanced in a header from James Ward-Prowse’s left-wing corner.

Brentford equalised with their first shot on target thanks to Vitaly Janelt’s excellent sliced volley after Bryan Mbeumo’s cross.

But the Saints retook the lead as Ibrahima Diallo shot goalwards and it bounced off the post and off Bees’ goalkeeper Alvaro Fernandez for an own goal.

Shortly after the restart, the hosts added a third when Armando Broja raced on to Oriel Romeu’s fine through ball and calmly finished past Fernandez.

Substitute Che Adams, back after a Covid-19 absence, scored within five minutes of coming on, reaching a long pass before the Brentford goalkeeper and poking in a fourth – the first time Southampton have scored four times in a Premier League match this season.

This was the first home game for Southampton since it was confirmed that the Sport Republic group had bought Chinese businessman Gao Jisheng’s 80% stake of the club earlier this month.

Serb media mogul Solak, who financially backed the takeover, was at St Mary’s and saw his new side record only their fifth league win of the season.

The Saints move above Brentford, who missed a chance to move into the top half and instead drop to 13th.

For Brentford, this result continues a worrying run of form away from home which has seen them pick up only two points on the road from their past six league matches.

After falling behind to Bednarek’s header, they equalised on 23 minutes when Mbeumo, who had scored a hat-trick in their 4-1 win over Port Vale in the third round of the FA Cup on Saturday, crossed and Janelt showed excellent skill to cut across the ball and volley home.

Janelt instantly had a chance to put the Bees ahead but saw his 25-yard powerful strike parried well by home goalkeeper Fraser Forster.

But after the Saints regained their advantage, the hosts pulled cleared and scored twice more to run out worthy winners and inflict the heaviest defeat of the season on the visitors.

Both Ivan Toney and Mbeumo had efforts saved late on by Forster, but Brentford boss Thomas Frank was unhappy with his side’s performance and will need an instant improvement as their next game is at Liverpool on Sunday.

“Every game you win or learn and we will learn a lot from that,” said Frank. “It will be so hard to watch it back but it’s a reminder that you have to play every game at 100% and if you don’t you get punished.

“We need to look at ourselves. We gave five chances away and they scored four of them. In the first half we need to be much better on the ball and in the second half we were too open.

“It hits so hard because we want to be good at defending and have done that all season but here we have not done it well enough.”