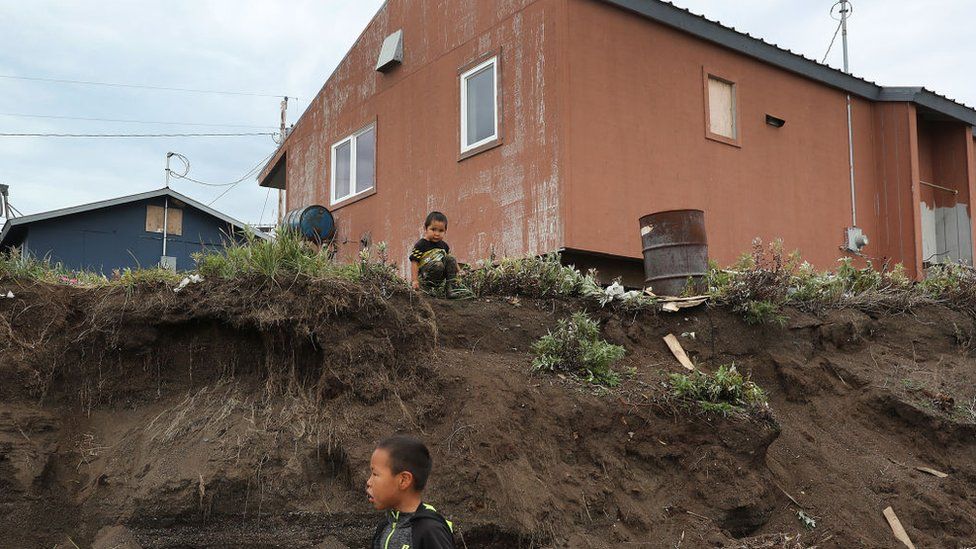 Cracked homes, buckled roads and ruptured pipelines are likely to become common in and near the Arctic as warming temperatures cause frozen ground to thaw, new findings say.

Climate change is causing the Arctic to warm two-to-four times faster than the rest of the planet.

“The land changes right before us,” one Alaska resident told BBC News.

Scientists studying the Arctic say that 70% of infrastructure and 30-50% of critical infrastructure is at high risk of damage by 2050, with projected cost of tens of billions of dollars.

The study published on Tuesday highlights again how climate change is expected to threaten life as we know it as well as the natural world.

“Arctic communities are all different but everyone living on permafrost is really struggling,” Kaare Sikuaq Erickson told BBC News. He works in Alaska as a cultural mediator between residents and institutions.

Permafrost or tundra is defined as land that has been frozen continuously for more than two years. It covers around one quarter of the northern hemisphere’s land surface, including half of Canada’s land and 80% of Alaska’s.

But warming temperatures are causing parts of it to thaw with often unpredictable effects, including sinkhole formation, land slips and flooding.

“Both the construction itself and the warming of the climate cause permafrost to thaw, which threatens existing infrastructure and future construction projects,” says lead author Prof Jan Hjort at the University of Oulu in Finland.

Imagine living on a block of ice and constantly trying to keep it frozen, Mr Erickson says when explaining the challenges facing Alaskan communities.

It affects everything from trying to dig foundations for a house, or building a level road, to installing sewer and water systems.

“Historically the ice did stay cooler, but now it’s warming fast,” he explains. “You see the foundations of buildings and highways are up and down – you’re driving over big bumps in the roads.”

Because of the unequal way that the US government divided up land after colonisation in the 19th and 20th centuries, indigenous villages now have limited land and few options to move as it becomes unstable, Mr Erickson explains.

Meanwhile in Russia, up to 80% of buildings are damaged in some cities built on permafrost, the research suggests. Most of the cities in the Arctic are located in Russia and the degrading landscape is affecting food security, traditional lifestyles and accessibility.

And as the heating of the planet is projected to accelerate in coming years, more permafrost is expected to thaw, threatening infrastructure and communities.

At least 120,000 buildings, 40,000 km of roads and 9,500 km of pipelines, as well as airstrips, are located in permafrost areas of the northern hemisphere, according to the study.

“If you think about the Arctic, the whole landscape stability is dependent on the threshold of zero degrees Celsius. And as surface temperature approaches zero, we are seeing huge waves of problems,” Arctic geologist Louise Farquharson from the University of Fairbanks, Alaska, told BBC News.

In some communities she studies, water mains are rupturing and houses are becoming unstable when the ground subsides. It’s become dangerous to play outside in areas due to ponds forming from meltwater.

“It’s important to emphasise that people have lived in these landscapes for thousands of years – it’s not as simple as saying communities can pick up and move,” she says.

In 2020, evidence of the catastrophic impact of warming permafrost was clear when a huge oil spill caused one of Russia’s worst environmental disasters.

Around 21,000 tonnes of diesel poured from Norilsk Nickel’s storage tanks into rivers and lakes in Russia’s Arctic north. Investigators believe the tanks sank into the ground after it became unstable as permafrost thawed.

It is possible to tackle the problem using different building design or trying to keep the permafrost cool, the research explains. But it is expensive and risky.

Some highways in Alaska are already built with what are known as air convection embankments. This method places porous stones inside the surface of roads to encourage heat to rise away from the frozen ground.

“Most scientists would probably agree that the sensible solution is to reduce our dependency on greenhouse gases and thereby lower the degrees to which our planet will warm,” suggests Dr Poul Christoffersen, glaciologist at the Scott Polar Research Institute in Cambridge, UK.

“It’s always been hard to live in the Arctic – we always found ways to thrive and we will carry on but it’s getting tougher for our people,” Mr Erickson explains.

Scientists are also closely analysing permafrost to assess how much carbon dioxide locked inside the frozen land is being released as it warms.

The research is published on Tuesday in Nature Reviews Earth & Environment.