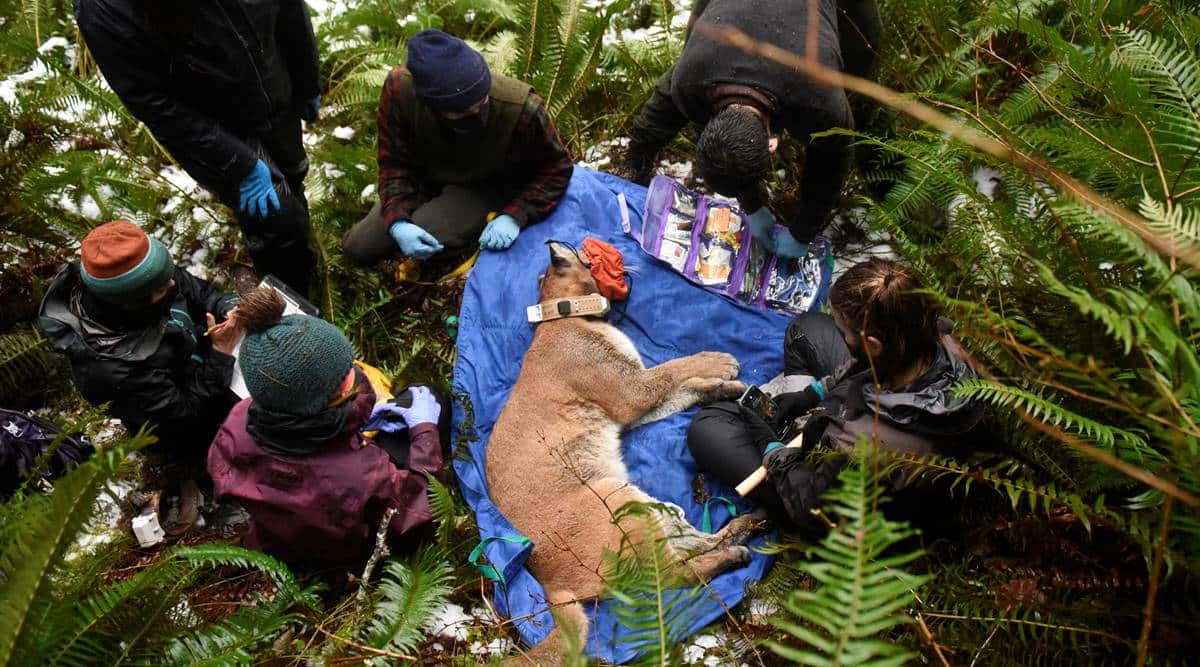 Howling hounds picked up a cougar’s scent and led researchers deep into the forest, where the steep hills were covered with cedars and ferns dusted with snow. The dogs chased Lilu, an 82-pound (37-kg) cougar whose collar needed a new battery, up a tree. After being plunked by a tranquilizer dart, the groggy cat climbed down and went to sleep. The team was able to swap her collar, examine Lilu, and then inject her with a drug to wake her.

It was part of a day’s work for the Olympic Cougar Project, a partnership between a coalition of Native American tribes, a renowned cougar expert, and the Washington Department of Transportation.

The project could lead to placing highway crossings so wandering cougars – also known as mountain lions and pumas – can find new places to breed, improving the wider environment. The same species of cat prowls terrain from Canada to Tierra del Fuego.

“Without a doubt, mountain lions increase the health of ecosystems,” said Mark Elbroch, one of the world’s leading cougar experts with Panthera, a wildcat conservation group that is part of the Olympic Cougar Project.

When a cougar kills a large mammal like a deer or elk, it cannot eat the whole carcass. In the Olympic Peninsula, the apex predator leaves behind a meal for golden eagles, bald eagles, ravens, crows and other birds; mammals such as bear, weasels, bobcats, and coyotes; and a range of invertebrates including all kinds of beetles.

Like bears, cougars claw salmon out of rivers, helping fertilise plant species in the woods. The Lower Elwha Klallam, Skokomish, Makah, Quinault, Jamestown S’Klallam and the Port Gamble S’Klallam tribes in the Olympic Peninsula are lending their traditional knowledge to the project, along with the modern expertise of wildlife biologists.

“As an indigenous person, we are taught that we have to walk in two worlds, one of our traditional sense and one of the modern day sense,” said Vanessa Castle, a Lower Elwha Klallam tribal member who works for the project. “I think it changes the way these scientists think about these animals.”

Biologists say big cats on the Olympic Peninsula have lower genetic diversity than the rest of Washington state as they are hemmed in by Interstate 5 and cut off from natural breeding partners in the Cascade mountains.

Part of figuring out where to build a wildlife crossing – a practice used in habitat conservation – involves tracking the cougars by fitting them with GPS collars that provide a wealth of useful data. Lilu is among about 60 collared cougars on the peninsula. There is no consenus on the total population of the elusive, wide-ranging animals.

“The collaring piece gives us information that we just could not get in any other way,” said Kim Sager-Fradkin, a wildlife biologist hired by the Lower Elwha Klallam Tribe.

Some 100,000 cars travel along I-5 each day, blocking cougars and other wildlife from crossing to the other side of the freeway.

“It is likely one of the worst barriers for all species in the state,” said Glen Kalisz, a habitat connectivity biologist with the Washington state Department of Transportation.

In Southern California, transit authorities are soon to break ground on a wildlife crossing over U.S. Highway 101, used by 350,000 cars a day, in one of the last remaining areas where there is natural habitat on both sides of the freeway.

As with the Washington project, the aim is to improve cougars’ genetic diversity.Both the California crossing and the Washington I-5 project are learning from one of the largest such undertakings, along a corridor of I-90 further north in Washington, which is about halfway through building 26 wildlife crossings along 15 miles (24 km) of the highway.