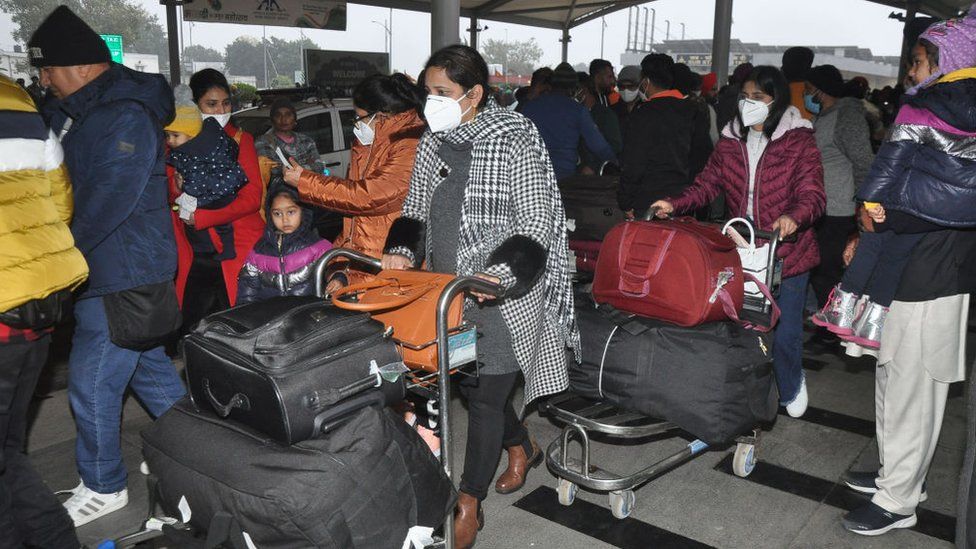 At least 173 passengers from Rome, and 125 travellers from Milan tested positive on arrival in Amritsar.

Thirty of them were tested again at the airport – but only three people tested positive for Covid the second time.

Airport officials told BBC Punjabi they have stopped using the services of the lab, SpiceHealth, for now.

“If it’s a manufacturing fault, we have to follow certain guidelines. If it’s a human or procedural fault, then we will certainly take action,” airport director VK Seth said.

Dr Charanjit Singh, civil surgeon of Amritsar, told the BBC that preliminary investigations suggested that the controls of the machines were not working properly, and that the issue was being investigated at the “highest levels”.

Mr Singh added that SpiceHealth was hired by the Airports Authority of India (AAI) on 15 December to test passengers arriving from high-risk countries as per government rules.

India is currently in the third wave of the pandemic, which experts believe is led by the Omicron variant. It added more than 167,000 news cases on Tuesday.

In a statement, SpiceHealth said that given the “alarmingly high positivity rate of passengers” on the two charter flights from Italy, “we have decided to conduct a detailed technical investigation and decontamination”.

“SpiceHealth has used technology specified by the airport and followed all protocols listed by the manufacturer and national accreditation agencies,” the lab said.

At least 13 passengers who arrived on the flight from Milan and tested positive escaped institutional quarantine.

Footage from that day showed ambulances lined up outside the airport to take the infected passengers to hospital as crowds gathered and chaos ensued. Many of the passengers appeared furious, alleging that their positive test results were inaccurate as they had tested negative before boarding the flight.

Several states, including Punjab – where Amritsar is located – have introduced restrictions to curb the spread of the virus amid a surge in infections.

Punjab has shut schools and colleges, and imposed a night curfew.

India has so far recorded more than 35 million Covid cases and around 484,000 deaths from the virus.