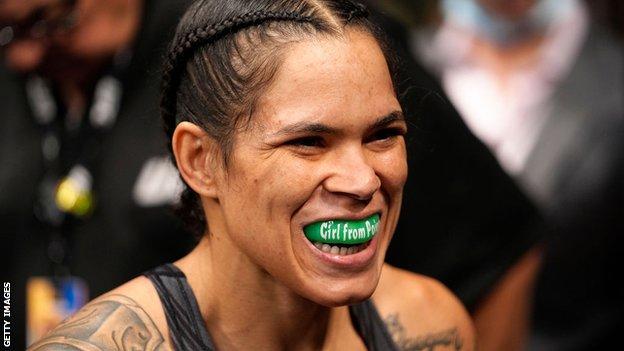 2021 was one of the most significant years in MMA history.

There were unforgettable fights, memorable returns and stunning upsets.

So, what does the next twelve months have in store for us? Well, the unpredictable nature of MMA is what keeps fans engrossed and 2022 is shaping up to be another historic year for one of the fastest growing sports in the world.

With that being said, BBC Sport writers make six bold predictions for the year.

MVP will be Bellator champion

At 28, the Ukranian will only get better. Stylistically Amosov is a nightmare for British challenger Michael ‘Venom’ Page.

But how many times have we seen a fighter defeat the celebrated champion and then stumble in his first defence? Bellator chief Scott Coker is eager to match the rivals next, with Londoner Page expected to get home advantage.

It is not common for the champion to defend his title for the first time in a challenger’s backyard. The stars might just be aligning for MVP – and I have a feeling he can claim the belt in 2022.

Amanda Nunes to retire in 2022

This might sound like a wild prediction, but I really do think Amanda Nunes could retire this year. However, that’s not to say I don’t think Nunes – potentially the greatest female fighter of all time – will not have a big 2022.

A rematch with Julianna Pena and a chance to regain her bantamweight title will be a huge fight. American Pena proved a champion must always be 100% focused or will get punished when she beat Nunes at UFC 269 in December. Nunes will be looking to regain her title and return to featherweight for a fight – maybe with sought-after free agent Kayla Harrison.

Nunes has huge fights ahead of her this year, but she turns 34 in the summer and her mind certainly seemed elsewhere in her last bout. The Brazilian has been open about seriously considering retirement in 2020 before she became a mother. Call me crazy, but 2022 could be the final chapter of Nunes’ incredible career.

Leon Edwards will get a title shot

Unbeaten in ten fights over six years, with notable victories over Nate Diaz, Rafael dos Anjos and Vicente Luque – I’m predicting Leon Edwards to finally get his shot at the UFC welterweight title in 2022.

That might not be his next fight, especially as Edwards will likely have to overcome one more top contender in the division such as Gilbert Burns or Jorge Masvidal, before he can challenge for the title. But should he win, ‘Rocky’ will be in pole position to challenge Kamaru Usman for the top honours.

Edwards believes he’s long overdue a title shot and some fighters with his record would arguably have had one by now.

It’s thought however that the 30-year-old’s reserved personality and lack of definitive finishes inside the octagon have worked against him when it comes to the UFC matchmakers.

Would one more big victory be enough to convince them? I think it would be hard to ignore.

Was there a British fighter who had a more impressive 2021 than Tom Aspinall?

The 28-year-old was dominant; earning a Performance of the Night bonus for each of his two victories.

In submitting veteran Andrei Arlovski in February and knocking out Sergey Spivak seven months later, Aspinall showed he has the all-round game to make his mark in the heavyweight division.

The manor of his victories was so impressive, it led UFC legend and fellow heavyweight Daniel Cormier to label Aspinall as the “real deal” and “the person the world is going to take notice of.”

Aspinall has reiterated his desire to take things slow in the UFC, but if he carries on in 2022 where he left off last year, well it won’t be long before he joins the division’s elite.

Max Holloway to move up to lightweight

Despite two losses to Alexander Volkanovski, Max Holloway’s featherweight legacy is cemented. He’s a former champion who has been at the top of the division since 2016. But, right now, only Volkanovski poses Holloway with a serious threat.

Maybe it’s time for something new? Holloway is only 30 and there are more lucrative and exciting fights for him at lightweight.

He has already tried his hand in the division back in 2019, where he struggled with the power of Dustin Poirier and lost convincingly over five rounds.

However, I think Holloway can make the necessary amendments in order to compete in that weight class.

Can we take a second to think about some of the fights he could be involved in? I’d love to see Holloway v Conor McGregor for a second time. And just imagine fights with Michael Chandler, Tony Ferguson and Justin Gaethje.

The lightweight division is the most stacked in the MMA and it could be about to get even better with the potential inclusion of Holloway.

It’s almost been exactly two years since Jon Jones last fought in the UFC, but he’s yet to make his much-anticipated debut at heavyweight.

Jones, 34, vacated the light heavyweight title in August 2020 and immediately declared he was moving up a weight class. This has yet to happen.

The youngest ever UFC champion recently stated he is willing to fight this April or July – and I suspect the UFC could grant GOAT contender Jones an immediate title fight.

Francis Ngannou defends the title against Ciryl Gane later this month at UFC 270. Jones could fight the winner in the summer.

Can you imagine the hype behind his return?

It will be one of the most interesting stories this year and I think it might end with Jones winning heavyweight gold.