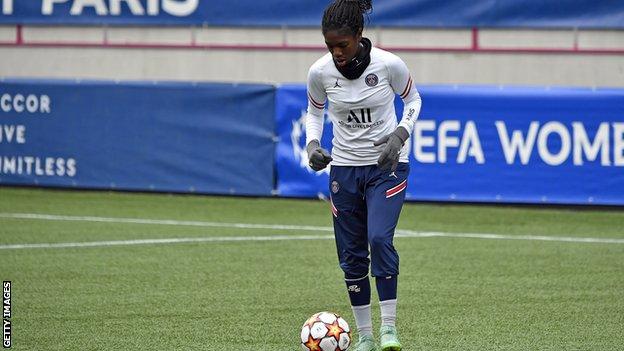 Paris St-Germain’s Aminata Diallo returned to action on Sunday after two months out following her arrest over an attack on team-mate Kheira Hamraoui.

Diallo, 26, was released without charge by French police in December and said an investigation will show her “complete and total innocence”.

The midfielder came on after 77 minutes as PSG beat Dijon on penalties in the Coupe de France.

Hamraoui, who is also back in training and has not played for PSG since the incident on 4 November, was not selected for the last-16 tie.

The match was PSG’s first since 16 December due to the winter break in France.

Diallo was driving Hamraoui and another unnamed team-mate home after a team meal when they were ambushed by two masked men.

A statement from Diallo, released by her lawyer last month, denounced a “totally artificial suggestion of a rivalry between her and Mrs Kheira Hamraoui that would explain why she would target her team-mate”.

It added: “This theory does not reflect at all the reality of their relationship.”

Diallo, capped seven times by France, joined PSG in 2016 and has made more than 60 appearances for the club. She spent time on loan at Atletico Madrid last season.