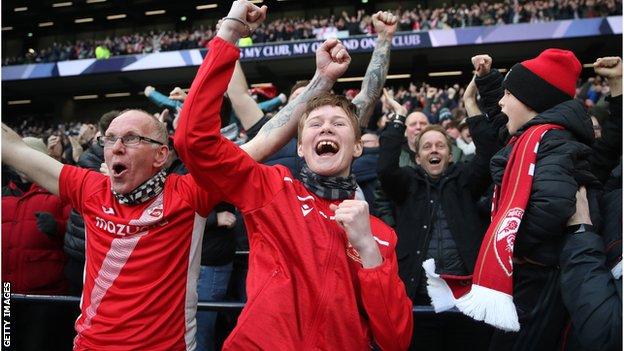 Tottenham summoned the cavalry to secure a place in the FA Cup fourth round, coming from a goal down to beat Morecambe.

Shrimps defender Antony O’Connor sidefooted a volley in from 10 yards to score the game’s opening goal after 33 minutes, prompting wild celebrations among the travelling supporters.

But their hopes of a famous victory faded as goals from Harry Winks and substitutes Lucas Moura and Harry Kane gave Tottenham victory.

Spurs boss Antonio Conte make a host of changes, naming Kane and Moura on the bench and having to do without the injured Son Heung-min, but still picked a side featuring the likes of Dele Alli, Tanguy Ndombele, Winks and Giovani lo Celso.

For Morecambe, a team fighting relegation and who have won only once in their past seven matches in League One, it was almost a historic occasion to match fellow third-tier side Cambridge’s heroics at Newcastle on Saturday.

There were chants of “Premier League, you’re having a laugh” from the away end, as the Morecambe fans made the most of their afternoon.

The Shrimps, without manager Stephen Robinson, who missed the game after a positive Covid test, were 16 minutes away from the fourth round before Winks’ free-kick cross went all the way in to equalise.

Goals from Moura and Kane saved Spurs’ blushes inside the last 10 minutes, but the visiting fans could be heard singing loudly until the end.

It would have been harsh to describe any upset as a smash and grab because, although Morecambe defended diligently and relied upon goalkeeper Trevor Carson at times, they threatened too.

Cole Stockton, their 18-goal striker, was dangerous throughout and the visitors knew how to play on Spurs’ nerves.

In the first half, he pounced on a slack back pass from Joe Rodon, before turning Ben Davies and shooting over early in the second period.

And for long spells this game had all the hallmarks of a major upset. Spurs were making mistakes because the visitors put them under great pressure.

But the Premier League side’s substitutes changed the game.

They breathed new life into a passive display and completely transformed the mood inside the stadium.

After Winks’ goal, Kane surprisingly missed a header from eight yards out as the pressure increased.

And their late dominance told when Moura capitalised on a mistake on the halfway line to race free, round Carson and score, before Kane’s clever finish from a difficult angle secured the hosts’ place in the fourth round.

Watch five third-round ties live across the BBC including Manchester United v Aston Villa – plus highlights from every match (UK only). Read the full details here.