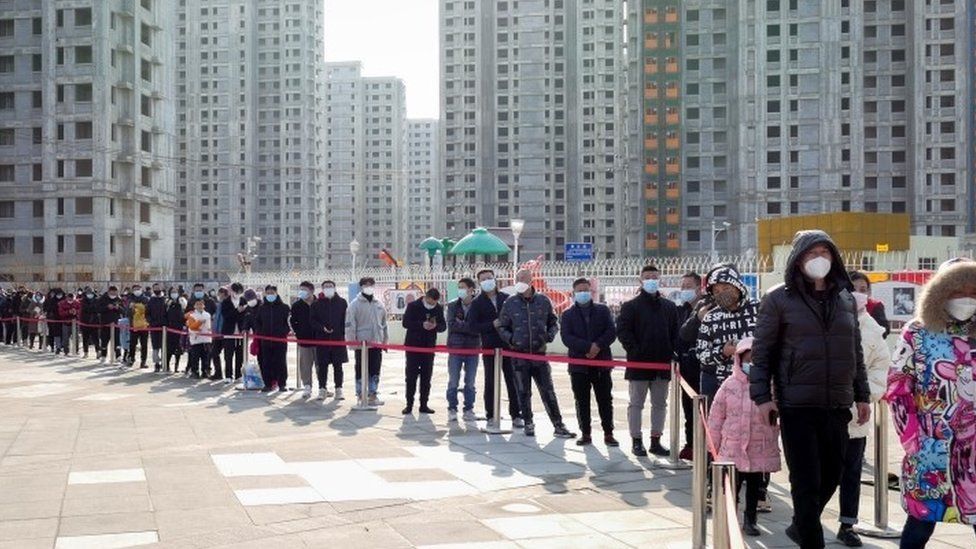 The Chinese port city of Tianjin is aiming to test its 14 million residents within the next 48 hours after the discovery of a cluster of Covid cases.

Residents have been advised to stay home until tested, and must return a negative result to get the health pass needed to use public transport.

Of the 20 cases discovered, two are the highly transmissible Omicron variant.

China is pursuing a zero-Covid policy, which aims to eradicate the disease in the community.

In contrast to other parts of the world, which have opened up following vaccination campaigns, China has responded to small numbers of local cases with mass testing and tight lockdowns.

The policy is likely to come under pressure with Lunar New Year on 1 February, when millions of people normally travel, as well as the Winter Olympics starting a few days later. Host city Beijing is just 115 km (70 miles) from Tianjin.

Olympics’ organisers are operating a “closed loop”, in which games participants can only leave if they enter quarantine or leave the country. Beijing residents have been advised to avoid approaching vehicles used to ferry people to and from the games, Reuters reports.

In Tianjin, there are large queues of people waiting to get tested.

The response stops short of the stricter measures seen in the cities of Xi’an and Yuzhou, which are both under lockdown.

Xi’an has been locked down since late last month and its resident ordered to stay indoors, with shopping for essentials also banned.

Locals have complained that food supplies have run low, with some resorting to bartering.