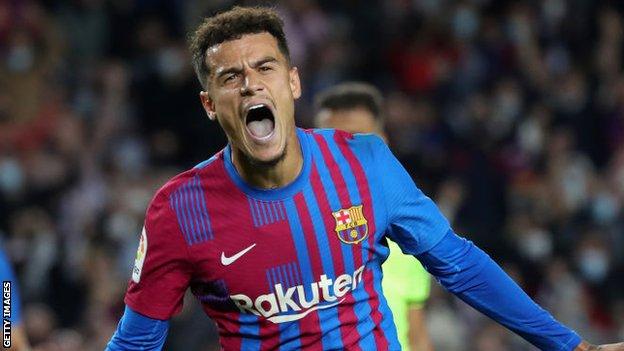 Aston Villa have agreed a deal to bring in former Liverpool playmaker Philippe Coutinho on loan from Barcelona until the end of the season.

The deal, which is subject to a medical and a work permit being granted, includes an option to buy the 29-year-old Brazil international.

Coutinho joined Barcelona in a £142m move from Liverpool in January 2018.

However, he has not had the expected impact and Barca are keen to move him on to lighten their wage bill.

Arsenal, Everton, Newcastle and Tottenham were also linked with a move for Coutinho.

The playmaker, who has scored 26 goals in 106 appearances for the Catalans, has 18 months to run on his Nou Camp contract, which expires at the end of the 2022-23 season.

His move reunites him with Villa manager Steven Gerrard, who was his captain at Liverpool.

Gerrard, who described his former team-mate as a “special footballer” on Thursday, and Coutinho were key parts of the Liverpool side who fell just short of winning the Premier League title in 2014.

Coutinho scored 41 Premier League in 152 appearances for Liverpool, who he joined in a £8.5m move from Inter Milan in January 2013.

Barcelona were desperate to move on Coutinho after agreeing a deal to sign Ferran Torres from Manchester City for £55m.

Coutinho also wanted a fresh start elsewhere and his links with Villa manager Steven Gerrard, who played alongside him at Liverpool and has remained a huge admirer even through his struggles at Barcelona, have seen off a host of Premier League clubs investigating the possibility of securing a deal.

It is a sign of Villa’s ambition and determination to back Gerrard, who succeeded sacked Dean Smith in November, that they have been prepared to push hard to sign a player the manager believes could be a real game-changer in the second half of the season.

Villa will be paying less than half of Coutinho’s current wages at Barcelona and the deal is also understood to be cheaper than the one they struck to take Ross Barkley on loan from Chelsea last season.

Coutinho has languished in the shadows at Barcelona, although he did win the Champions League in 2020 while on loan at Bayern Munich.

He was a key figure alongside Gerrard when Liverpool almost won the Premier League eight years ago and the idea of being reunited with his former captain held huge appeal for a player desperate to re-ignite his career.