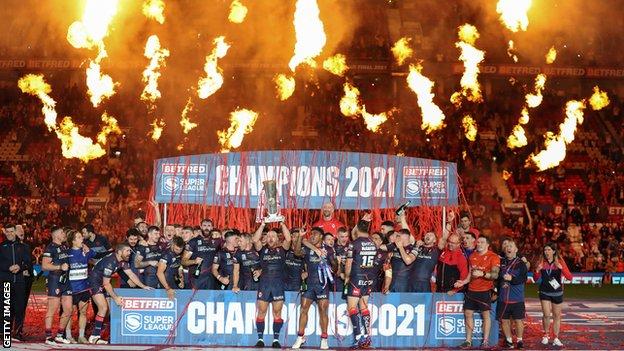 Super League clubs are set to be ordered to forfeit matches, with their opponent given a 48-0 victory, if they are unable to fulfil a fixture because of a Covid outbreak.

In 2021, clubs could apply for a cancellation if they had seven or more players unavailable due to the impact of Covid, with 21 games called off.

Only a handful were rescheduled.

The Rugby Football League will consult clubs about the change over the next two weeks before making a decision.

Under last season’s guidelines the penalty for a game being unfulfilled was a 24-0 win for the opponent, but that score is now set to be doubled and clubs could face misconduct charges and sanctions, including having to pay compensation to the opponent.

Last season, only Wigan Warriors played all of their scheduled regular season matches.

The table will also no longer be decided on points percentage.

After the season returned following a long hiatus because of the pandemic in 2020, the table was ultimately decided on points-per-game and the same system was retained for the 2021 campaign, where it was also used for the Championship and League One.

The Championship season kicks off on 29 January, with Super League starting on 10 February.

The RFL will also decide by the end of January whether to bring back scrums, with the laws committee recommending they should return if 85% of players across the Super League and Championship have been double vaccinated.

However, as of the deadline of 31 December, that figure had not been met.