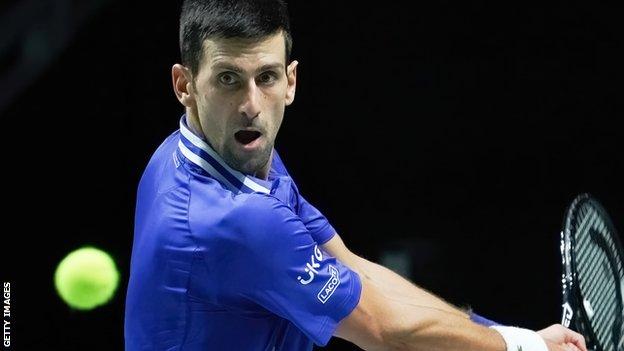 Rafael Nadal says he feels sorry for Novak Djokovic after he was denied entry to Australia, but added the world number one could be playing “without a problem” if he had wanted to.

Djokovic was due to defend his Australian Open title but had his visa revoked on arrival in Melbourne.

The Serb’s vaccine exemption to play in Australia has caused controversy.

Djokovic, who has previously said he is opposed to vaccination, has had his deportation delayed until Monday.

The 34-year-old is being held in a government detention hotel, his lawyers having lodged an urgent appeal before the delay to deportation was confirmed.

The tournament starts on 17 January.

“I think if he wanted, he would be playing here in Australia without a problem,” Nadal said, following victory at a warm-up tournament in Melbourne.

“Of course I don’t like the situation that is happening. In some way, I feel sorry for him. But at the same time, he knew the conditions since a lot of months ago, so he makes his own decision.”

Djokovic could “fix” the issue immediately by explaining to border authorities why he is medically exempt, according to MP for Australia’s governing Liberal Party Warren Entsch.

Entsch told BBC Radio 5 Live that Djokovic would have applied for his visa on the basis he “had a legitimate medical reason”.

“It’s not unreasonable for the authorities to check the veracity of that claim,” he explained.

“It doesn’t need to be made public, but they’ve got to see that the visa that was issued – there is a legitimate reason for that.”

Djokovic was held at Melbourne airport for several hours before border officials announced he had “failed to provide appropriate evidence” for entry and would be deported.

Australian Open organisers said the Serb’s medical exemption had been granted by two independent medical panels organised by Tennis Australia and Victoria state, but the basis for the exemption has not been disclosed.

The decision to allow nine-time champion Djokovic to play at the tournament was met with anger in Australia, where residents have endured some of the world’s strictest restrictions during the pandemic with some still barred from travelling between states or globally.

The country’s prime minister, Scott Morrison, denied Djokovic was being singled out and said no-one was above the country’s rules.

Nadal, level with Djokovic and Roger Federer on a record 20 men’s Grand Slam singles titles, described the situation as “good for no-one”.

“I can’t have a clear opinion on everything because I don’t have all the details, honestly,” he continued.

“The only thing that I can say is we have been going through very challenging [times] and a lot of families have been suffering a lot during the last two years with all the pandemic.

“It’s normal that the people here in Australia get very frustrated with the case because they have been going through a lot of very hard lockdowns, and a lot of people were not able to come back home.”

Nadal, who contracted coronavirus in December, added he “believes in” medical advice on vaccination.

“That’s my point of view. I went through the Covid. I have been vaccinated twice. If you do this, you don’t have any problem to play here. That’s the only clear thing.

“The world in my opinion has been suffering enough to not follow the rules. After a lot of people have been dying for two years, my feeling is the vaccine is the only way to stop this pandemic.

“That’s what the people who understand this say, and I am no-one to create a different opinion.”

The social media post Djokovic used to announce his medical exemption 48 hours ago was not a smart move at all and probably alerted the authorities that he was on his way.

If, as we are told, he turned up at immigration with minimal documents then anybody with any experience of Australian immigration will know that is very unwise and actually very arrogant.

If he wins the court battle, he stays, he wins the Australian Open for a 10th time, it will be the most remarkable story. It shows how much he wants to do it.

He is potentially putting himself through staying in this immigration hotel for another four days to fight a legal case which initially a lot of experts thought he wouldn’t have much chance of winning.

This is not a problem that is going to go away. As long as vaccination is required by countries for entry then he is going to have problems at other Grand Slams. Certainly in the United States, it is hard to think they will be offering Djokovic an exemption unless he has a very good reason.