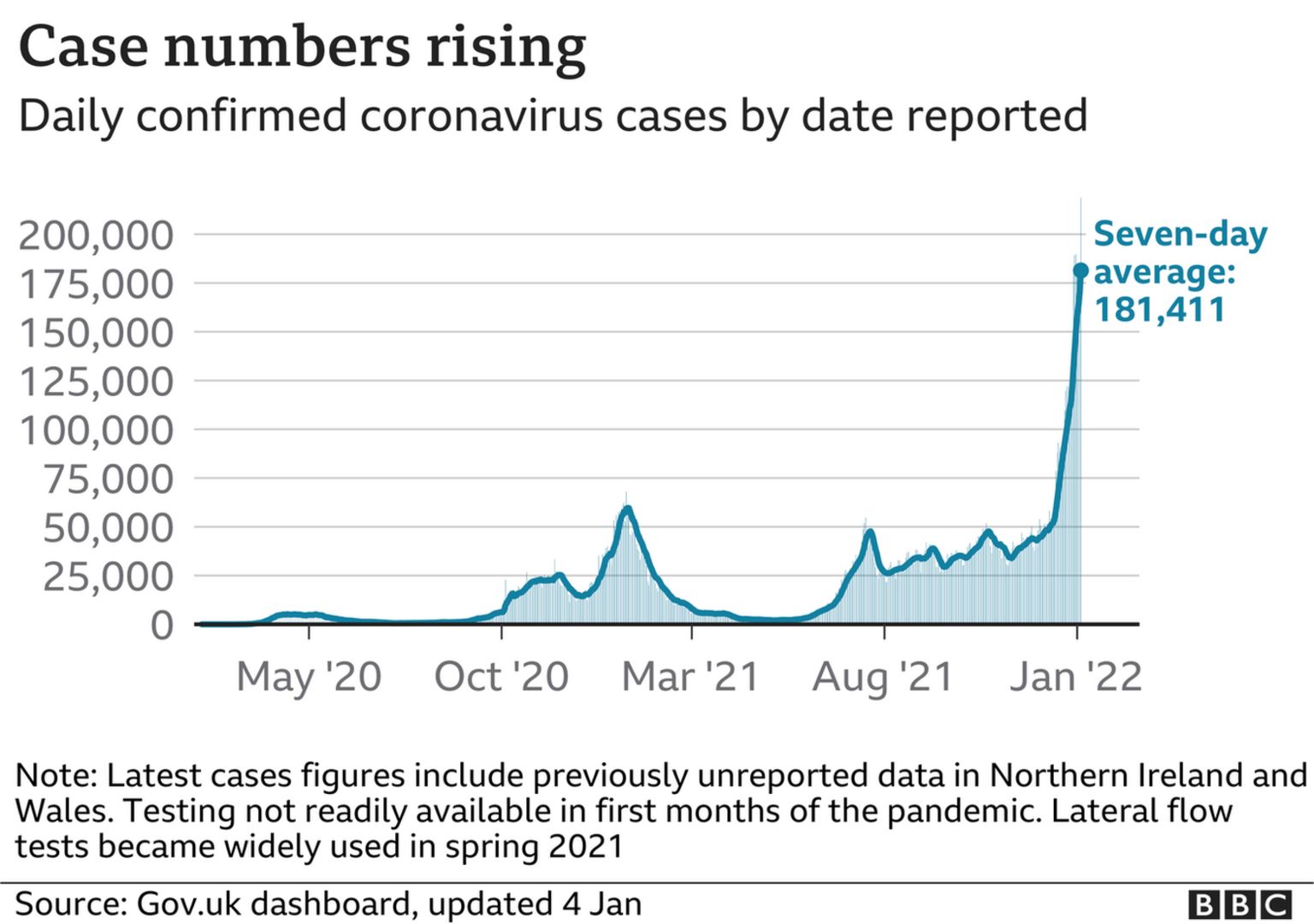 Travel industry groups have called for all remaining Covid restrictions on travellers to be removed in the latest government review.

With data last week suggesting one in 25 people in the UK currently had the virus, airlines say passenger testing is having no real impact.

The government said it continued to “keep all measures under review”.

The travel industry said compulsory testing for UK arrivals and departures had held back the sector’s recovery.

The prime minister will meet his cabinet later and urge them to back his decision not to impose any further Covid restrictions in England.

On Tuesday, Boris Johnson said he hoped the country could “ride out” the current wave, although he acknowledged parts of the NHS would feel temporarily overwhelmed.

What are the current travel rules?

Currently, all travellers to the UK aged 12 and over have to show proof of a negative test, which can be a PCR or a lateral flow test, and must be taken up to two days before departure for the UK.

They then have to take another test – which this time must be a PCR test – within the first two days after their arrival in the UK.

But at the time that rule was brought in a month ago, the number of new cases reported in the UK each day was running between 40,000 and 50,000 – and was only rising relatively slowly because it was almost entirely made up of the Delta variant of Covid.

But now, the UK has announced more than 200,000 new cases in a day for the first time in the entire pandemic and Omicron is the dominant variant – so airlines can argue that there is no longer any hope of relying on testing to “keep out Omicron”.

The only other countries in the world that have topped 200,000 positive tests in a single day this week have been the US and France.

The trade body Airlines UK argued that continuing the current measures would be financially disastrous for the industry. It added that the current limits have depressed demand and dented consumer confidence.

Manchester Airports Group (MAG) has sent the government research it commissioned, which it claims shows that pre-departure testing has had little or no impact on the spread of Omicron.

It said that passenger numbers at MAG’s airports fell by more than 30% after Omicron measures were introduced.

Tim Hawkins, chief of staff at MAG, told the BBC’s Today programme the research showed there was a “basis for taking out all tests” related to international travel, due to the high number of Covid cases in the UK.

“We are beyond the point where international travel restrictions can play a role in managing that peak and if there is no benefit to it then we shouldn’t be doing it and we should take those measures out,” he added.

Last month, Health Secretary Sajid Javid said that “very soon”, if Omicron became the dominant variant, there would be “less need to have any kind of travel restrictions at all”.

The system has come under pressure in recent weeks as cases have surged, with appointment slots and home test kits periodically being temporarily unavailable.

The Daily Telegraph has reported that the government is planning to change testing rules so that people who test positive on lateral flow devices do not need to take a confirmatory PCR test.

The government did not comment but pointed to the guidance from the UK Health Security Agency which maintains that people should take a follow-up PCR test if they receive a positive lateral flow result.

“We continue to review PCR availability and continue to make more PCR booking slots available every day,” the agency said.

Travellers must pay for private tests rather than using free NHS tests.

MAG chief executive Charlie Cornish and Airlines UK chief executive Tim Alderslade said the government should press ahead with the “immediate removal” of travel testing requirements which come at “huge cost” to the industry.

“It is therefore vital they do not remain in place a day longer than is necessary,” they wrote in a statement.

A government spokesperson said that they keep all measures “under review” and added that the temporary testing requirements were introduced to “prevent additional Omicron cases from entering the UK, stopping people from passing it on to others if they are infected”.

The Times has reported that the requirement for people to take a pre-departure test before they arrive in England is likely to be dropped by the government in the update later. But it said the requirement that people take a PCR test within two days of arriving in England is set to remain.

Separately, European airline and tour operator stocks rose on Tuesday amid a rise in investor confidence in the sector.

Hargreaves Lansdown analyst Susannah Streeter told Reuters: “With so many people in the short-term being forced to isolate at home, it’s likely many people will be spending the next few weeks browsing travel blogs for inspiration, given there is so much desperation for a holiday.”

A recent report by aviation analytics firm Cirium found that the Covid pandemic triggered a 71% drop in international flights in and out of the UK in 2021.