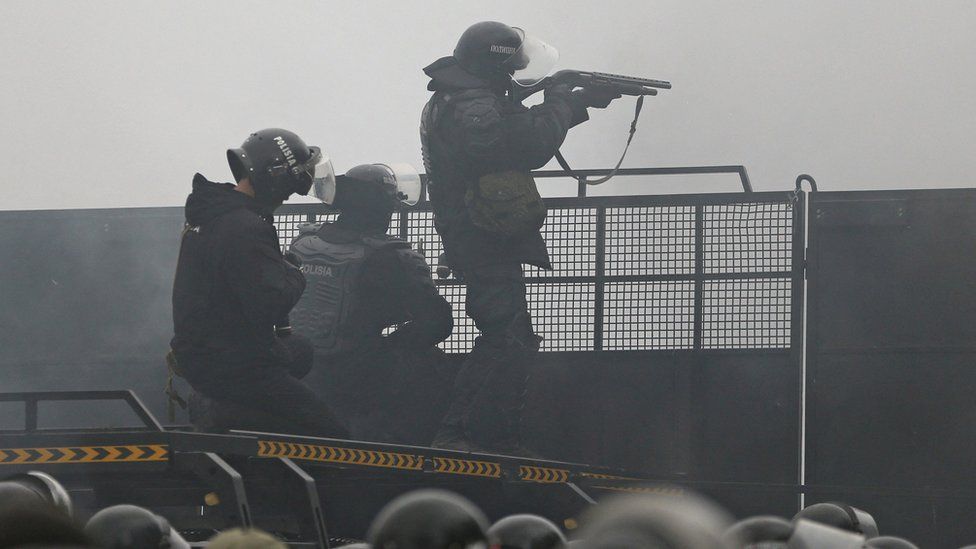 Internet access has been cut in Kazakhstan amid mass protests sparked by rising fuel prices.

Anti-government protesters in the main city, Almaty, stormed the mayor’s office on Wednesday. Part of the building appeared to be on fire.

The president has promised a tough response, calling the protests a “black period” in the country’s history.

“As president, I am obliged to protect the safety and peace of our citizens, to worry about the integrity of Kazakhstan,” Kassym-Jomart Tokayev said in a TV address. He called the protesters “plotters” who were “financially motivated”.

Internet services in the country have been disrupted since Tuesday. By Wednesday, internet monitoring group NetBlocks reported that Kazakhstan was “in the midst of a nation-scale internet blackout”.

It came as thousands of people took to the streets, despite a state of emergency in the capital Nur-Sultan, in Almaty, and in the western province of Mangistau.

In Almaty, protesters gathered at the mayor’s office before eventually storming it. Videos on social media showed a plume of smoke rising from the building, while gunfire could also be heard.

Water cannon was used against protesters in the western city of Aktobe. There are reports that security forces have sided with protesters in some places.

The demonstrations started in the west of Kazakhstan on Sunday, before spreading across the country.

They began when the government lifted the price cap on liquefied petroleum gas, which many people use to power their cars. Its price quickly doubled in a matter of days.

On Tuesday, the president dismissed the government and said lower fuel prices would be restored, but the announcement has not brought an end to the protests.

Dissent and protests are uncommon in Kazakhstan, which declared independence in 1991 amid the collapse of the Soviet Union.

However, the town of Zhanaozen, in Mangistau province, was the scene of deadly unrest in 2011. At least 14 oil workers were killed in a police crackdown on a protest over pay and working conditions. The town has also been one of the main centres of the latest unrest.

Protests are not only about fuel

The speed at which the protests turned violent took many by surprise, both in Kazakhstan and in the wider region, and hinted that they are not only about an increase in fuel prices.

This is a traditionally stable Central Asian state, which is often described as authoritarian. Until 2019 it was run by President Nursultan Nazarbayev, whose rule was marked by elements of a personality cult, with his statues erected across the country and a capital renamed after him.

Yet when he left, it was amid anti-government protests which he sought to limit by stepping down and putting a close ally in his place.

Most elections in Kazakhstan are won by the ruling party with nearly 100% of the vote and there is no effective political opposition.

The analysts I spoke to say that the Kazakh government clearly underestimated how angry the population was, and that these protests were not surprising in a country with no electoral democracy – people need to take to the streets to be heard.

And their grievances are almost certainly about a far wider set of issues than the price of fuel.