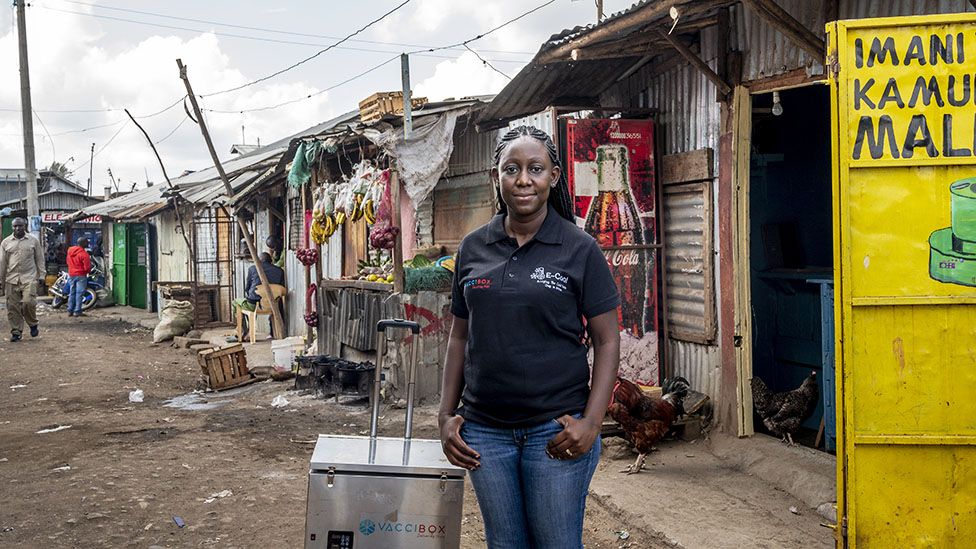 “You get so excited when you have, like a ‘bingo’, or a lightbulb idea! Then you get to the nitty-gritty of actualising it.”

It’s the spring of 2021 and engineer, Norah Magero, is talking about the refrigerator she designed after some local dairy farmers asked her to come up with something to help them keep their milk fresh on route to market.

Still in her early twenties, Ms Magero is co-founder and chief executive of Drop Access, an organisation which finds sustainable solutions to support rural communities in Kenya.

She came up with a nifty fridge design for the dairy famers, which could be powered by the sun, included a USB port for a mobile phone and was small enough to fit on a bicycle or motorbike.

“To be affordable, it has to be small,” she explains. “And if it’s small, why not carry it directly from the farm to the market, by tying it on your motorbike. It’s portable, because if they’re going to walk, or move, for three kilometres, they can’t carry all of that.”

But when the time came to transition the design from drawing-board to build, her team hit a roadblock. Sourcing the parts they needed in Kenya proved really challenging, forcing her initially to look much further afield.

In the end she contacted a manufacturer in China and sold them the design specifications. “We crossed our fingers that they were actually going to produce exactly what we asked them,” she explains. But unfortunately, after an agonising four-month wait the fridge that arrived was expensive and disappointing. It was not what she and the team had hoped for.

So, the team re-grouped. “We thought, ‘Hey, we are engineers, why don’t I look for other engineers who are more excited about manufacturing, and see if we can break down the components of this fridge and see what we can source locally’.”

They decided to build it all from scratch.

At that stage, getting the fridge completed really took on a new urgency as Ms Magero realised, in the midst of the Covid pandemic, that her invention might help vaccinate rural communities not already connected to the electricity grid.

Kenya is a huge country and the government is rapidly rolling out more reliable electricity to communities scattered across a big land area. But there are still many places where the grid has not yet arrived.

Many vaccines and medicines – not just ones for Covid – need to be stored in a fridge or freezer, so, for healthcare professionals this lack of mains electricity is a significant obstacle in the roll-out of any vaccine programme across the whole population.

So, for Ms Magero personally, getting her fridge built began to take on whole new significance. “If I don’t get support as a woman, to manufacture in Kenya, I start questioning my abilities, I start having imposter syndrome,” she says.

However, fast forward to Ms Magero in December 2021 and she has more than achieved her ambitions. Her product has evolved, and is now called Vaccibox. It has been nominated by the Royal Academy of Engineers for their prestigious Africa Prize, and her fridge is now being used to dispense vaccine at two rural locations in Kenya.

Norah Magero was interviewed for a BBC World Service programme, Generation Change, which features voices from a new generation of young engineers and scientists tackling the world’s biggest issues and the Nobel Laureates whose footsteps they are walking in.

One such laureate, Frances H Arnold, awarded the Nobel Prize for Chemistry in 2018, is confident Ms Magero’s generation is the one most likely to find ways to successfully tackle global warming.

“Almost all the Nobel inventions were made, or the ‘Nobel-worthy’ ideas came from younger scientists, myself included, because we’re driven to change the world,” she says. “And young people have the audacity to do that. They also have the desire to see the world better than what we’re leaving to them.”

Like many of her peers, Ms Magero deliberately created Drop Access, to find environmentally-friendly solutions for different problems within her own community. Her determination to take action reflects global research showing solving climate change is now an urgent priority for many young people.

Similarly, Frances Arnold used her own discovery – a new way of directing how enzymes work – as the basis for an alternative fuel company more than 20 years ago. She is now working at the heart of the US government as co-chair of President Joe Biden’s Council of Advisers on Science and Technology.

“We’re talking major transitions – from fossil-fuels to renewable energy – that’s going to [mean] major changes in jobs and training and things that people will do and people my age don’t like change.”

She explains this means her work will not only involve engaging with the new generation already hoping for change but also working with an older generation, who are less enthusiastic.

“That’s frightening. Young people love change, I think and easily adapt to it, but older people don’t,” she says. She expects this to be a huge challenge but adds “scientists are optimists, right? Otherwise, we wouldn’t be out there exploring the unknown.”

“Having no idea what you’re going to find, you always hope that there’s gold around the corner,” she says. “So, I’m a born optimist. And I do see hope in the younger generation, I do see a lot of people working towards these goals.”