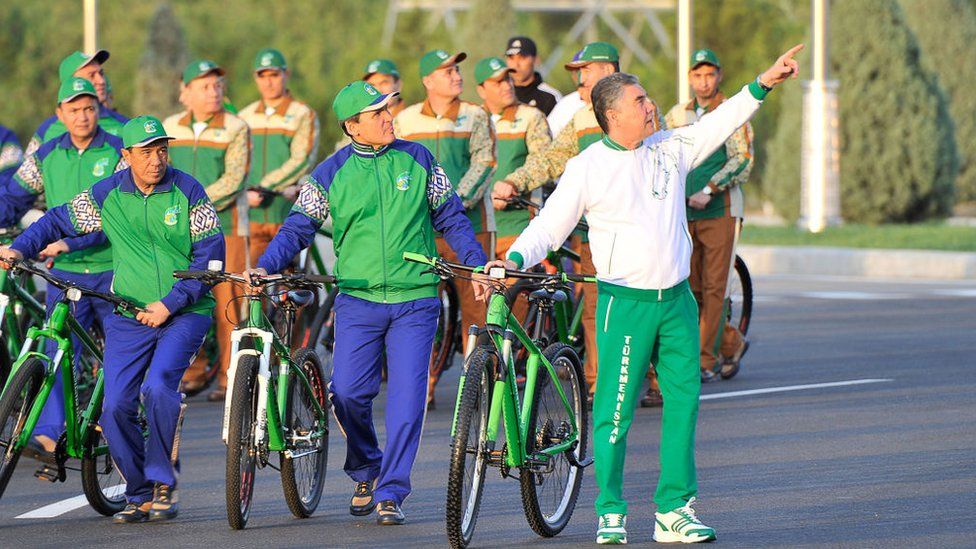 Turkmenistan is one of only a handful of countries, including North Korea, which says it has no coronavirus cases. But reports suggest it is experiencing its third and possibly strongest wave of Covid-19.

Sayahat Kurbanov was suffocating. He gasped for air as if he were running a marathon, the pain in his chest unbearable. He had all the symptoms of coronavirus.

The problem was he was in Turkmenistan, where patients like him officially do not exist.

When he called an ambulance last month the doctor told him he had pneumonia and should go to hospital urgently. Mr Kurbanov (not his real name) knew that the country’s doctors referred to Covid cases as pneumonia.

On the way to the hospital Mr Kurbanov managed to call the clinic where he had done a Covid test a few days earlier. “It is positive,” he heard a quiet voice say. “What is positive?” he shouted, “is it Covid?” “Yes,” came the answer.

Only later did he discover they never give you a piece of paper if you test positive in Turkmenistan.

The first hospital they went to refused to take him because it was full.

“I nearly died on the way,” Mr Kurbanov said. “The lack of air… the virus progressed so quickly. I started hitting the window and shouted ‘Please stop, I can’t breathe’. They gave me oxygen but it didn’t help much.”

The next hospital also refused to admit him, this time because it was banned from taking in patients who were not registered in the capital, Ashgabat.

“I started panicking. I asked the doctor, ‘What am I supposed to do? Die here?'”

He called a doctor he knew and begged for help. After numerous phone calls and heated conversations he was eventually admitted.

His condition did not change for five days.

“I couldn’t inhale – it was as if everything inside me was glued. I had panic attacks since I couldn’t breathe. It was as if I had dived under water and couldn’t surface.”

He shouted for nurses to give him something to alleviate the pain. Getting into hospital is not always enough to receive treatment in Turkmenistan, Mr Kurbanov says. Doctors routinely ignore patients and nurses don’t check on them unless someone high up calls the right people.

The hospital was also badly understaffed with a couple of nurses looking after more than 60 people. There were times when a cleaning lady administered injections, he said.

Nurses shared stories about patients collapsing and dying in front of them because there were no ventilators available and oxygen machines didn’t work. Doctors changed Mr Kurbanov’s treatment several times.

Foreign-based Turkmen media are reporting on the third wave of infections, but almost everyone inside the country is afraid to speak. The Turkmen.news website has identified more than 60 people who have died of Covid-19 since the start of the pandemic.

The Turkmen authorities do not disclose coronavirus cases. President Gurbanguly Berdymukhammedov, a former dentist, uses the image of a healthy nation as the core of state propaganda. To admit that the country is being affected by the pandemic could undermine his regime’s legitimacy.

However, one case last year almost blew the cover-up. A Turkish diplomat in Ashgabat fell ill. Kemal Uckun had typical coronavirus symptoms: pain in the chest, sweating, fever. He was diagnosed with pneumonia.

His wife, Guzide Uckun, sent his chest X-rays to Turkish hospitals and they all confirmed that he had Covid-19.

She desperately tried to get Mr Uckun back to Turkey but the Turkmen authorities reportedly refused to allow a medically-equipped plane to fly him out. Permission was only granted several hours after his death.

Mr Uckun’s body was embalmed and forensic experts could not find traces of coronavirus.

The Turkmen authorities have introduced some quarantine measures to stop the spread of the disease. But the government insists that, thanks to its “preventive steps”, the country remains Covid-free.

None of the staff at Mr Kurbanov’s hospital used the words Covid or coronavirus. “They would say ‘this virus’ or ‘this disease'”, he said. “I would push them, ‘Why aren’t you saying what it is? Is it Covid?’ And they would nod silently.”

While in hospital, Mr Kurbanov received a text message from the government with a health warning. It urged people to wear face masks because of dust in the air.

“Are we dying from the dust?” he said. “They will let people die but they will never admit that they have Covid.”