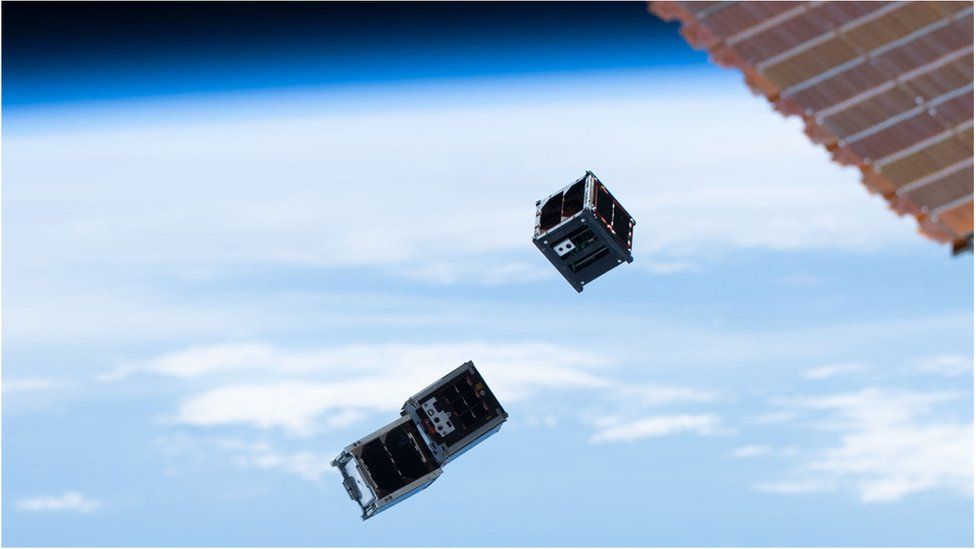 The CubeSat is a small but mighty bit of tech. About the size of a shoebox, the tiny satellites were invented by Professor Bob Twiggs in 1999 as an educational tool for students.

“They couldn’t put very much in it, which was the real challenge. It forced them to quit adding things to their designs,” Bob says, laughing.

Quicker and cheaper to build and launch than conventional satellites, there are now hundreds of CubeSats orbiting Earth, made by universities, start-ups and governments.

The Norwegian government has partnered with the satellite company Planet, to tackle deforestation around the world.

Planet has a constellation of 180 CubeSats continually taking pictures of Earth. Their cameras have a resolution of 3m per pixel and can pick up evidence of logging from space.

“The Norwegian government has paid for data to track deforestation in 64 tropical countries,” Will Marshall, CEO of Planet says.

“We let the forestry ministries in those countries know where deforestation is happening and Norway then does or doesn’t provide funds to them depending on if they uphold an agreement to stop it.”

Earlier this year, a team of students from Italy and Kenya launched the WildtrackCube-Simba. This CubeSat will monitor birds and mammals in Kenya’s National Park.

“We have had conflicts between humans and wildlife, for example when elephants have invaded farmers crops, damaging the property, and sometimes even killing people,” says Daniel Kiarie, a student engineer in Nairobi.

“So we want to help them prevent that by giving them prior information about the movement of animals, so they can ward them off before they get to the villages.”

They plan to fit animals with radio tags next year, which they hope will track more than just their location.

“There’s a common problem of poaching for elephant tusks and rhino horns in Kenya,” Daniel says.

“We think these tags could also look at the heart rate and detect if an animal is killed.”

The CubeSat is on a three-year mission. CubeSats typically last between two and five years before they burn up in the atmosphere, depending on how high they’re launched into orbit.

The Rights Lab at Nottingham University uses satellite imagery to help it delve into the secretive world of forced labour.

It most recently used CubeSat imagery to map the makeshift camps of Bangladeshi fruit pickers in Greece.

“We can see how these informal settlements are changing through time,” says Professor Doreen Boyd, who is leading the project.

“We know when there’s land clearance we’ll see new settlements forming when we look back later.”

The team worked with a local NGO who visited the camps they had found.

“They were able to talk to to the migrants there so they’ve got a lot more information about what’s going on in terms of living conditions… They were able to say: ‘Right we have got 50 informal settlements in this area, how do we prioritise our activity?'”

Russia recently caused international outrage when it fired a missile at one of its old spy satellites, sending thousands of pieces of debris spinning out into low-Earth orbit.

Global networks track nearly 30,000 pieces of space junk as they journey around Earth, from defunct satellites to rocket stages. However, there’s far more debris that’s too small to be tracked but is big enough to threaten satellites or astronauts on board spacecraft.

There are lots of issues around clearing up space junk, not least working out which bit of engineering belongs to which nation. However, scientists are one step closer to solving the practical issue of how to catch an object speeding through space thanks to CubeSats. They are using them to replicate rubbish in experiments in space.

In 2018 the European RemoveDEBRIS satellite managed to release and catch two CubeSats using a harpoon and a net.

This year, Japanese company Astroscale launched the ELSA-d spacecraft, which successfully released and caught a CubeSat using a magnetic system. In future tests the CubeSat will be made to tumble like typical space junk, before a recapture is attempted.

There are several fleets of CubeSats working together above our heads to provide a low-cost ‘internet of things’. This network connects people to objects tagged with sensors in remote locations all around the world.

Some farmers use sensors to keep an eye on water levels in far flung animal troughs or storage towers, saving them having to check in person.

They can even be used to make renewable energy more efficient. Wind turbines are generally visited twice a year for maintenance, so if a blade is damaged, it can be months before it’s discovered and fixed.

A company called Ping Services has created a sensor that monitors the sound made by wind turbines as they rotate. It can pick up a change in this sound which indicates a damaged blade, and relay this back to the turbine operator via a CubeSat network. This means they can be fixed much quicker, and be more efficient.

While most CubeSats look inwards towards Earth, a handful are being pointed towards the stars.

In 2018, Nasa launched the first CubeSats into deep space. MarCO-A and B relayed vital information back from the Insight Lander as it descended on to Mars.

Next year, Nasa will launch 10 more CubeSats on its Artemis 1 rocket. Missions include testing the effects of deep space radiation on a living organism and studying water deposits at the lunar south pole.

They are all part of a programme that one day hopes to land humans back on the moon.

Listen to People Fixing the World from the BBC World Service here.