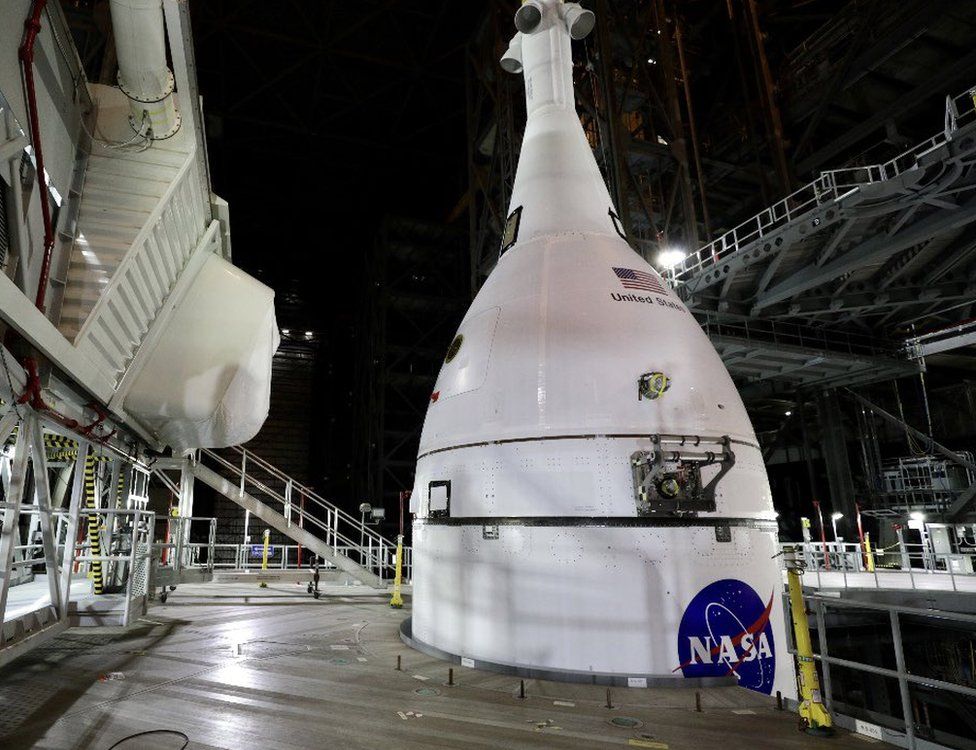 Nasa’s next-generation spaceship has been lifted onto the rocket that will launch it to the Moon this year or in early 2022.

On Wednesday, the Orion spacecraft was attached to the powerful Space Launch System (SLS) rocket at Nasa’s Kennedy Space Center in Florida.

For its upcoming flight, Orion will fly around the Moon without astronauts.

But it will eventually carry people as part of a US plan to return people to the lunar surface this decade.

This programme is called Artemis – after the sister of Apollo – and could help establish a long-term human presence on Earth’s only natural satellite.

A crane lifted Orion and then lowered it onto the top of the SLS inside the cuboid Vehicle Assembly Building (VAB) at Kennedy.

Teams then began work to fully secure the spacecraft to its launcher.

On Monday, Orion was transferred to the VAB from another facility where it was being housed, ahead of the operation. It was the last significant piece of hardware waiting to be added to the launch system ahead of the planned test flight.

In coming weeks, engineers will also carry out tests on the assembled vehicle, including a rehearsal where the SLS rocket is loaded up with liquid fuel while a launch countdown is simulated.

The SLS will launch the Orion spacecraft as part of the uncrewed Artemis-1 mission. This three-week flight will test the SLS and Orion before astronauts are allowed aboard for Artemis-2, which will also loop around the Moon in late 2023.

Artemis-3 will see astronauts land on the lunar surface for the first time since the Apollo 17 mission in 1972. Nasa has selected Elon Musk’s Starship as the vehicle that will carry humans down from lunar orbit to the surface.

Orion will dock with Starship in lunar orbit. Astronauts will then float through a hatch from Orion to Starship to begin preparations to travel down to the lunar surface.

The landing mission is currently scheduled for 2024, though many observers expect that date to slip.

The metal structure for the Orion spacecraft that will be used for that mission also arrived at Kennedy Space Center this month.

This flight will carry the first woman to walk on the surface, along with the next man. The Artemis programme will also see the first person of colour travel to the Moon.