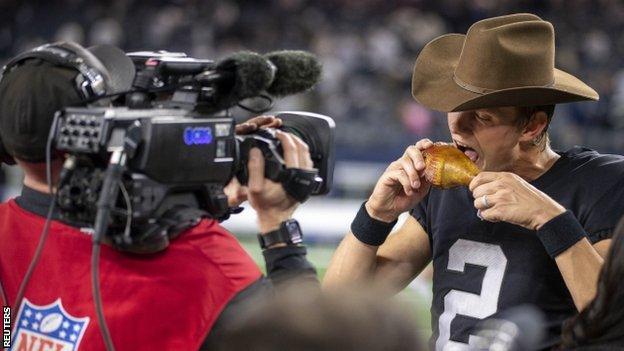 Daniel Carlson kicked a field goal in overtime to give the Las Vegas Raiders a 36-33 win in the Dallas Cowboys’ traditional Thanksgiving game.

The Raiders led throughout in Texas until a frantic finish saw the Cowboys make it 30-30 with 2:54 remaining.

The two sides traded field goals to take it into overtime, where Carlson’s fifth field goal won it from 29 yards.

That ended a three-game losing streak for the Raiders and they are right back in contention in the AFC West on 6-5.

Dallas began hosting games on Thanksgiving in 1966 and only twice since have ‘America’s Team’ not played on the holiday.

But the visitors led 17-13 at the half and 27-19 after Carlson kicked a field goal late in the third quarter.

The late drama began as Cowboys quarterback Dak Prescott found Dalton Schultz for a 32-yard touchdown, and then for a two-point conversion to tie the score, but he could not prevent Dallas (7-4) slipping to their third loss in four games.

He completed 32 of 47 passes for 375 yards and two touchdowns, while Raiders quarterback Derek Carr was 24-of-39 for 373 yards and one touchdown.

Carr’s back-up Marcus Mariota came in to run in a three-yard touchdown in the third quarter, only for Tony Pollard to get the hosts right back in it by returning the kick-off for a 100-yard touchdown.

The Detroit Lions have an even longer Thanksgiving tradition than Dallas having played every year since 1934, but they remain this year’s last winless team after a 16-14 home defeat by the Chicago Bears.

The visitors had possession for the last eight and a half minutes, allowing Cairo Santos to kick a 28-yard field goal as time expired and give the Bears (4-7) their first win in six.

In this year’s other Thanksgiving game, the Buffalo Bills bounced back from Sunday’s 41-15 upset by the Indianapolis Colts to win 31-6 at the New Orleans Saints.

Josh Allen completed 23 of 28 passes for 260 yards and four touchdowns as the Bills improved to 7-4 in the AFC East – level with the resurgent New England Patriots.

Follow live text and radio coverage of the NFL every Sunday for the rest of the regular season from 17:30 GMT.