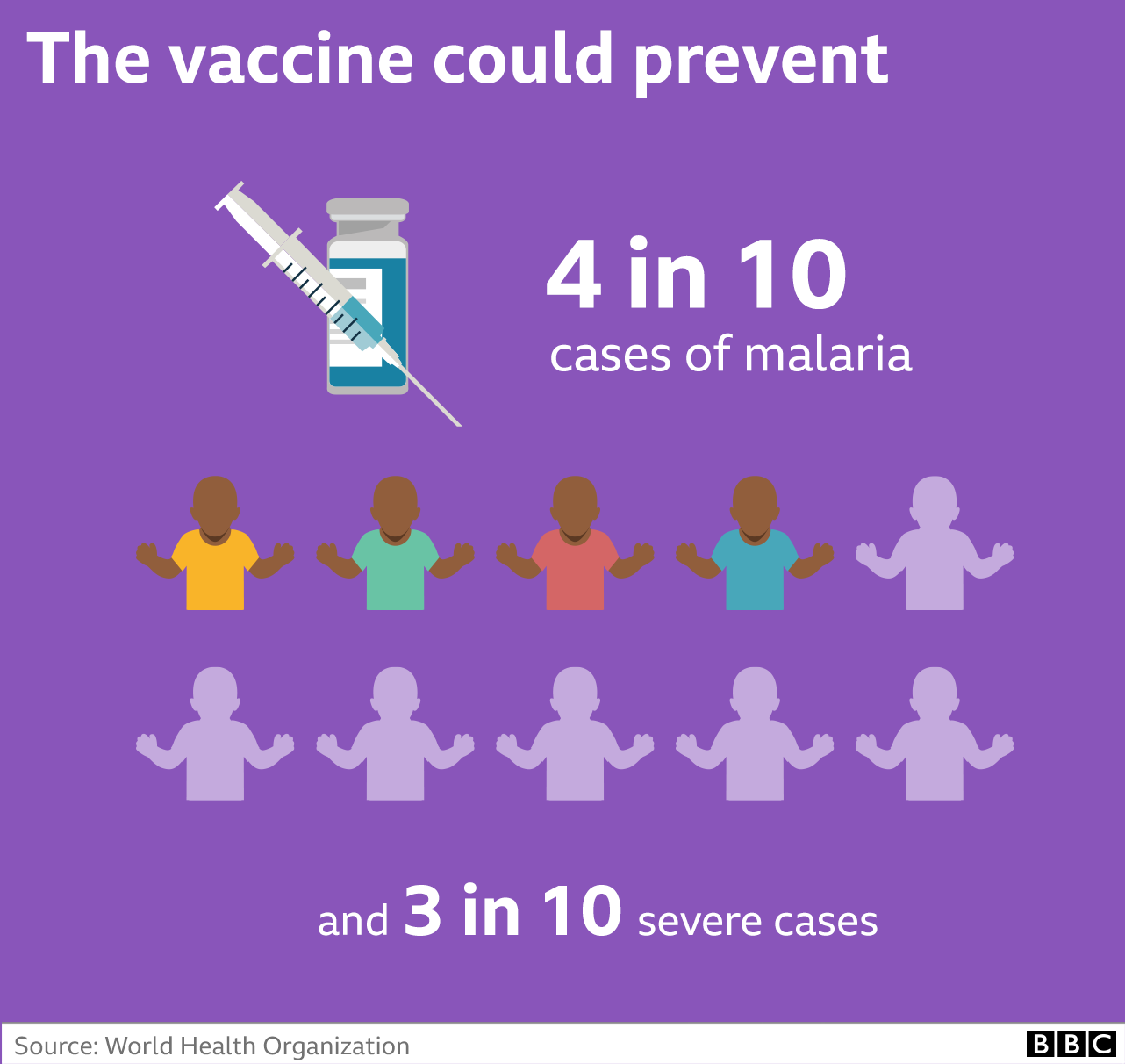 With more than 260,000 children under five dying from malaria each year in sub-Saharan Africa, this development, decades in the making, could save tens of thousands of lives, the WHO says.

But when will people start benefitting from the vaccine known as RTS,S?

We have been looking at that and some other key questions.

How effective and safe is it?

The vaccine was proven effective six years ago, preventing 40% of malaria cases and 30% of severe cases.

Since 2019, researchers have been carrying out wider pilot immunisation programmes in Ghana, Kenya and Malawi.

More than 800,000 children have received at least one dose and the WHO says there are no safety concerns.

Does it matter that the protection is relatively low?

It would obviously be better if it was higher, but what many would say is you need to think about the scale of the problem – with hundreds of millions of cases, a 40% reduction is still a huge number of lives saved.

“This is a moderately efficacious vaccine… [but] saving, preserving, avoiding 30-40% of cases and deaths can bring a major benefit to the population,” the WHO’s Pedro Alonso told BBC Focus on Africa.

Health authorities are also keen to stress this is a new weapon in the fight against malaria to be used alongside other preventative measures, such as treated bed nets and drugs that target the malaria parasite.

How does the vaccine work?

Malaria is a parasite that invades and destroys our blood cells in order to reproduce, and it’s spread by the bite of blood-sucking mosquitoes.

The vaccine targets the most deadly and common parasite in Africa: Plasmodium falciparum.

It tries to deal with the form of the parasite which enters the victim’s blood shortly after being bitten, by partially blocking access into human cells and therefore preventing disease, Dr Alonso said.

It needs four doses to be effective. The first three are given a month apart at the age of five, six and seven months, and a final booster is needed at around 18 months.

Children are considered to be the most at risk from dying from malaria as, unlike adults, they have not had a chance to build up immunity.

How much will it cost and who will pay?

The vaccine has been developed by the pharmaceutical giant GSK which has pledged to supply the doses at the manufacturing cost plus 5%, but has not specified the price.

When it comes to buying them it is now up to countries and donors to find the money.

“The international funding community has to now discuss and then decide how to procure the vaccine,” GSK’s chief global health officer Thomas Breuer told the BBC.

Rose Jalang’o, who has been helping to co-ordinate the pilot programme in Kenya, said the authorities were waiting for global guidance on how the vaccine will be financed as part of the national immunisation programme.

Currently in Kenya, most of the funding for vaccinations comes from donors such as the global vaccine alliance Gavi and the Bill and Melinda Gates Foundation.

What is the timetable for distribution?

The pilot programmes in Ghana, Kenya and Malawi will continue. GSK says it has donated 10 million doses for the study and so far a quarter of those have been used.

The company has committed itself to providing 15 million doses a year. If the money is found then they could start being available for wider use from the end of 2022 or early 2023, Mr Breuer said.

But that number may not be enough. By the end of the decade up to 100 million doses may be needed every year, according to Ashley Birkett from Path, which helped work on the immunisation programme.

What infrastructure is needed?

As the vaccination is intended for children under the age of two it can be bundled up with other child immunisation programmes so there may not be any need for extra infrastructure.

There would need to be more public education and some training of health workers.

In the pilot programme in Kenya, more than 200,000 children were vaccinated and it was made available in rural and remote areas through outreach programmes and remote clinics, Dr Jalang’o told the BBC.

What other vaccines are being developed?

Other vaccines are being worked on, including one from the University of Oxford in the UK. In April, researchers reported on early trials suggesting it was 77% effective.

But the development of vaccines for malaria is a long process as it is a much more complex disease to tackle than Covid-19, for example.

RTS,S is the first malaria vaccine to have gone through all the necessary checks and trials, but the WHO says a second malaria vaccine “could be highly beneficial to malaria control” as it would help satisfy anticipated high demand.