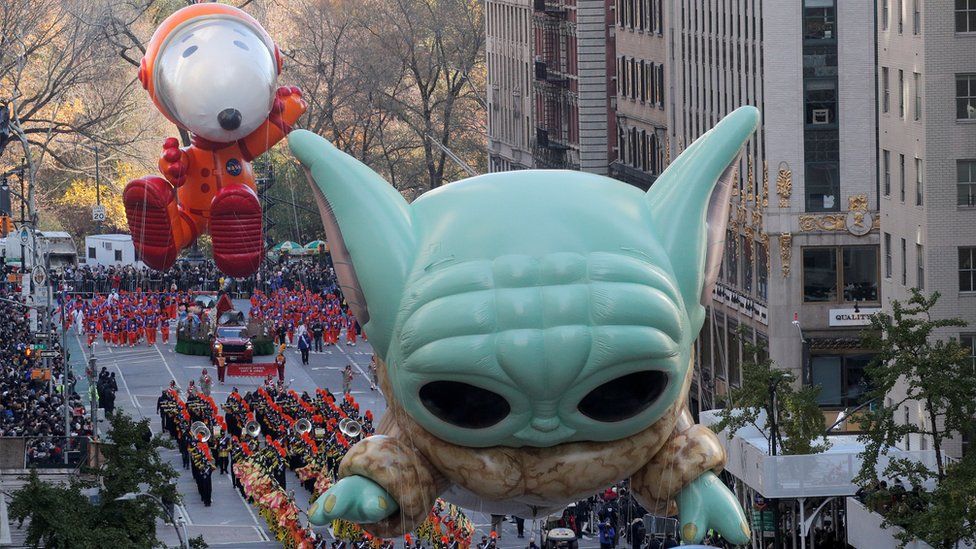 A cast of colourful characters returned to the New York skies on Thursday, delighting thousands who packed the streets for the annual Macy’s Thanksgiving Parade.

Baby Yoda, Snoopy and Papa Smurf were among the balloons spotted flying over the packed streets of Manhattan, while at ground level, marching bands, performers and – of course – a turkey kept the crowds entertained.

It was quite the change from last year, when the public were banned from attending the 95-year-old event in person due to fears over Covid.

The Snoopy balloon, a regular fixture since 1968, returned to the parade.

Baby Yoda, who delighted fans in the Star Wars spin-off The Mandalorian, was a new balloon for 2021. But he was not the only first-timer: Pokémon characters Pikachu and Eevee also made their debut as a pair.

They were joined by cast members from a number of Broadway shows including Wicked, Six and Waitress. Festive favourites The Rockettes were also in attendance.

This year, performers had to be vaccinated and also wear a mask – although there were some exemptions on face coverings for some of those singing and performing.

“This year, the parade’s back at full strength,” New York Mayor Bill de Blasio said prior to the event.

“It’s going to be a great sign of our rebirth.”