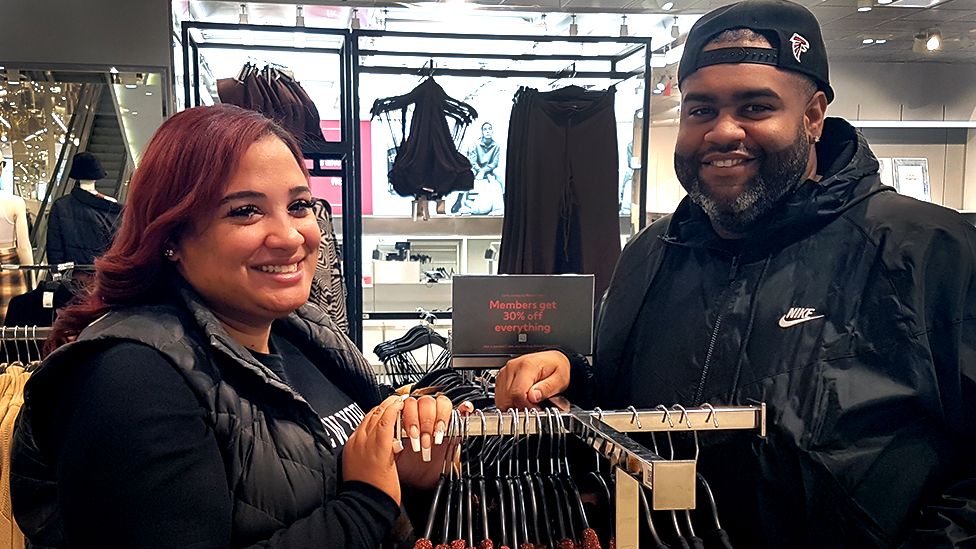 If all has gone according to plan, and the Thanksgiving feast didn’t make them too sleepy, AJ and his wife Samantha will have set off from their Manhattan home at midnight for some serious Black Friday shopping in nearby New Jersey.

“I’m excited,” says AJ, who works in a school. “There’ll probably be a crowd like you’ve never seen before.”

They don’t need a new television, but AJ would like to pick up a new 70 inch screen if there’s a bargain to be had.

“Every year, whether you need one or not, you look for a TV,” he says.

They’ll also look for video games, other electronics, clothes, sweaters, cardigans, jackets, clothes for the kids. “Whatever has the highest percentage off,” he says.

Samantha, a security guard, is already browsing the stores for something new to wear after a year-and-a half at home in a tracksuit, something stretchy, she says, to cope with that Thanksgiving dinner.

Against the glitter of Christmas lights and sequined party-wear, US shops have been lining up the price promotions again in the run up to the Black Friday weekend, which traditionally kicks off the festive shopping season.

This year is shaping up to be a bumper one, despite a backdrop of steeply rising prices, staffing and supply chain problems, and Covid rates that are rising too.

Many Americans have saved money during the pandemic, topped up by government support payments, in the form of stimulus cheques and child tax credits.

That’s already been finding its way into the cash registers. So far this year retailers have already sold 15% more than they had by this time last year, and its 21% more than in 2019.

“It’s like adding 50 million Americans to the economy in terms of demand,” says Mark Mathews, vice president of the National Retail Federation.

He and many others are predicting the spending spree will continue.

People have started to socialise a bit more, he says, so they’re buying party clothes. Some have lost weight, some have put it on during the pandemic, and need new outfits. And cash that’s not going on holidays and commuting is being spent on things for the home.

It adds up to “astonishing” levels of spending, he says.

Neil Saunders puts it down in part at least to the American psyche, which he says is “extremely robust”. Optimism and patriotism keep people spending, he says.

Paris Ratcliff and her aunt Phyllis put it down to happiness – and the sheer relief that things are better than last year.

“I know for a fact I’m spending more money this year,” says Paris, an education administrator from Chicago.

A pandemic-prompted sense of camaraderie and sympathy will boost their gift shopping this year, they think.

But in the meantime, Paris has picked up a pair of Kate Spade shoes for herself, and Phyllis has a Ralph Lauren coat, that was 60% off at Macy’s.

But not everywhere is as bustling as it could be.

Along Fifth Avenue and around Soho, both fashionable shopping districts, there are noticeable numbers of empty window fronts advertising for new tenants.

With city centres still partially hollowed out by people working from home, and tourism only just restarting, spending has picked up in patches.

“You have the residential areas that to me look a little bit busier than some of the midtown business areas,” says retail expert, Dana Telsey, chief executive of the Telsey Advisory Group.

And supply chain problems, which are leaving some Christmas stock stuck in transit, are affecting firms unequally too.

Those problems have “put a hinge in everything,” says Ms Telsey.

“Overall the big players have most of what you want in,” she says. Although lower inventories, are likely to mean shoppers find there are fewer of the really big promotions, she adds.

Large retailers such as Walmart have able to use their clout with suppliers and pay for air-freighting, it hasn’t been the same for smaller retailers, says Mark Mathew at the National Retail Federation.

“They don’t necessarily have the buying power,” he says. “If you’re dealing with a freight company, and you’re a multi-billion dollar company, you’ll have a better relationship, deeper pockets, and they’re more likely to help you out in these times.”

That’s certainly the experience of Karen Barwick, who set up Boomerang Toys, in the Tribeca area of downtown New York 19 years ago.

The lack of city centre workers means her shop, which stocks everything from the major brands to hand-crafted wooden toys from Europe, is still much quieter than normal.

And she is struggling to get hold of the full range of Lego, Jellycats, and other Christmas must-haves.

“We have 30 different models on back-order, but there are two on the shelves,” she says.

She hasn’t been able to re-order Ravensburger puzzles. They stopped accepting new orders in September she says, presumably because they knew they couldn’t fulfil them.

The stock she is getting in is costing a lot more too. “We’re trying not to pass it on to the consumer, but there are instances we have to,” she says.

Boomerang is still only doing around 60% of the business they were in 2019. The shop will be open on Friday, but they’re not expecting a particularly busy day.

“It’s not going to be a bumper year for us, but as long we get through, have a solid, steady amount of sales, then we’ll be satisfied,” she says.