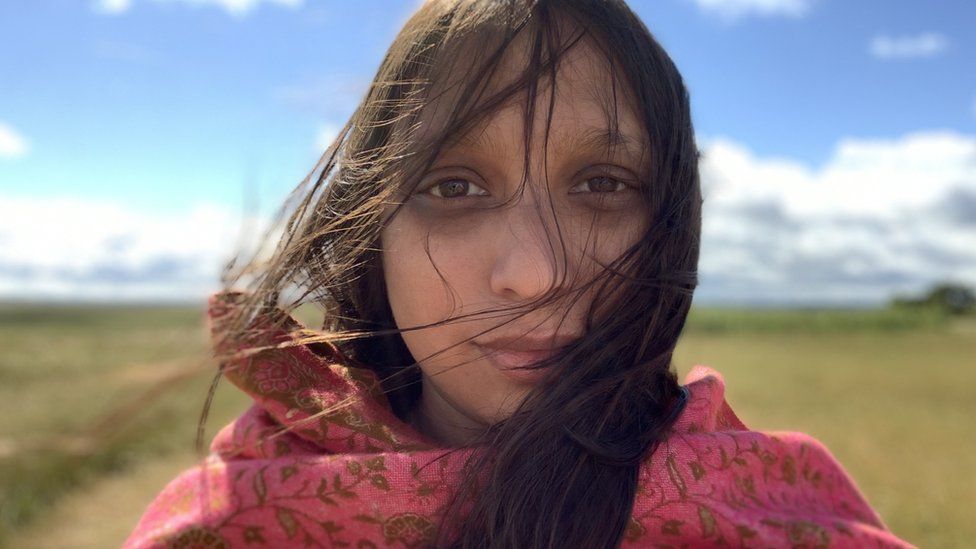 The BBC’s Tulip Mazumdar has reported on maternal health and the issues women face across the world. Here she reflects on her own experiences of pregnancy and baby loss.

You never think it will happen to you. But then you’re sitting in scan room 9, you’re staring at your bright blue socks as you wriggle your toes against the white hospital sheets, waiting for the sonographer to say something.

But they don’t. Instead they call someone else in. And in the split second before she speaks, you realise that your world is about to go into freefall.

It’s estimated that at least one in four pregnancies end in miscarriage in the UK. Around 50% of the time it’s down to a chromosomal abnormality, where the baby would never have been able to survive, and most women do go on to have a healthy pregnancy.

But like me, 1 in 100 women will experience recurrent miscarriage, which is defined in the UK as three miscarriages in a row, and the more losses we experience, the less likely a successful pregnancy becomes.

Around half of these losses are attributed to known causes, such as problems with clotting or the lining of the womb. But for many couples, the reasons remain unknown, simply because the research hasn’t been funded and undertaken yet. Women’s health issues are notoriously under-researched.

My losses went from bad to worse. The first was an early pregnancy test, followed by a late and long period, that’s known as a chemical pregnancy. The second was what’s called a “blighted ovum” where a gestational sac was found, but no embryo was developing. I lost that pregnancy while on an assignment for work, reporting on maternal health in a Greek refugee camp.

As I popped in and out of the camp’s filthy portable loos, I just had to focus on the task at hand. I was acutely aware that – with thousands of women packed into the camp – I wouldn’t be the only one in the process of losing a pregnancy. But – unlike the other women – I would get to fly home and be properly cared for.

He was born without a heartbeat. Born sleeping as some people prefer to describe it.

Rivah arrived in a perfect amniotic bubble, after a strangely beautiful labour. I’ve felt so bizarre admitting I “enjoyed” the birth. But it was the only thing we were able to do together. My husband holding my hand, and my baby being born.

The next few weeks are a blur. I have snippets of memories: agonising over whether to have a post-mortem, dressing my toddler son up as a bear for world book day, sitting in a funeral home being shown a catalogue of tiny coffins, meeting my beautiful nephew for the first time.

I know how intense it might feel to read this. Horrific even. But so many women and families have had similar experiences, and so few feel able to talk about it openly.

I’ve ended up apologising to others for my sad news making them feel bad, when I see their faces inevitably drop. It’s hard for either of us to know what to say.

Like me, millions of women do not get answers to why their baby died. But I consider myself one of the “lucky” ones with the excellent care I received here in the UK. I have reported on maternal health from many parts of the world, and I’ve seen first hand how so many women – particularly in some developing countries – don’t see a medical professional before, during or after losing their babies.

I remember meeting 17-year-old Sulaina in central Uganda. She was in labour on the floor of her small hut for two days before she was able to get to the nearest hospital two hours away. Her baby girl was stillborn.

Sulaina told me she didn’t even get to hold her, and when she returned home, she was shunned by her community.

Second trimester losses are described as rare, also around 1 in 100 pregnancies.

So, I was just “unlucky” I was told. All my investigative tests came back normal and we were advised to simply try again.

So we did, and we got pregnant again the same year. I was terrified, depressed, and exhausted with grief. But I was fast approaching 40, and waiting didn’t feel like a good option.

I did what you’re strongly advised not to do, and listened to my baby’s heartbeat from home regularly. It was beautiful and precious and fragile. I had a number of reassurance scans, supported by Sarah, the amazing bereavement midwife at my local hospital. I returned to work and tried to get through the days, weeks and months.

Then, again well into my second trimester, I was back in scanning room 9. I’d had a scan just four days earlier – my baby’s heartbeat was strong. Everything was normal. Everything was going to be ok, despite the tears streaming down my face as they applied the cold gel. This reaction had been pretty standard for all of my scans since losing Rivah.

There was silence as she moved the device across my belly.

Rae was born four days later. The birth was traumatic. I lost a lot of blood and ended up having to go into theatre.

Like I had done with Rivah, I spent the night with Rae. He lay beside me, wrapped in a tiny yellow gown and placed in a special cot that’s kept cold. I had brought leaves from the myrtle tree we had planted for Rivah, and rose petals which I placed beneath him.

I had experience this time, and knew how to try and make our brief time together special. I bought LED candles, a book to read him, and decorated the little white box they placed him in, with metallic felt-tip pens. I lay the little knitted blue teddy we were given in our memory box by his side.

I know how terribly sad all of this sounds, and it was. But it was also beautiful and loving and important for me to do. I know many women, and their partners, can’t or don’t want to do this. My husband chose not to. But I mention it here to try and remove some of the horror from this situation, and replace it with love. The love a mother has for the baby she carried.

If you have lost a pregnancy, I am so sorry.

If you know someone who has experienced the loss of a much wanted pregnancy, consider asking them about it.

It’s so hard to know what to say, and everyone is different. When Rivah was born, all I wanted to do for months afterwards was tell everyone every single detail about him. With Rae, it was the opposite. I was stunned into silence.

But for me, it’s feeling like I can talk about my losses if I need or want to, and that it doesn’t need to be this dark sad secret that can only be discussed in hushed, soft tones.

It is acknowledgement of the cherished lives that have been lost.

If you or someone you know has been affected by issues with pregnancy, you can find advice and support at bbc.co.uk/actionline.