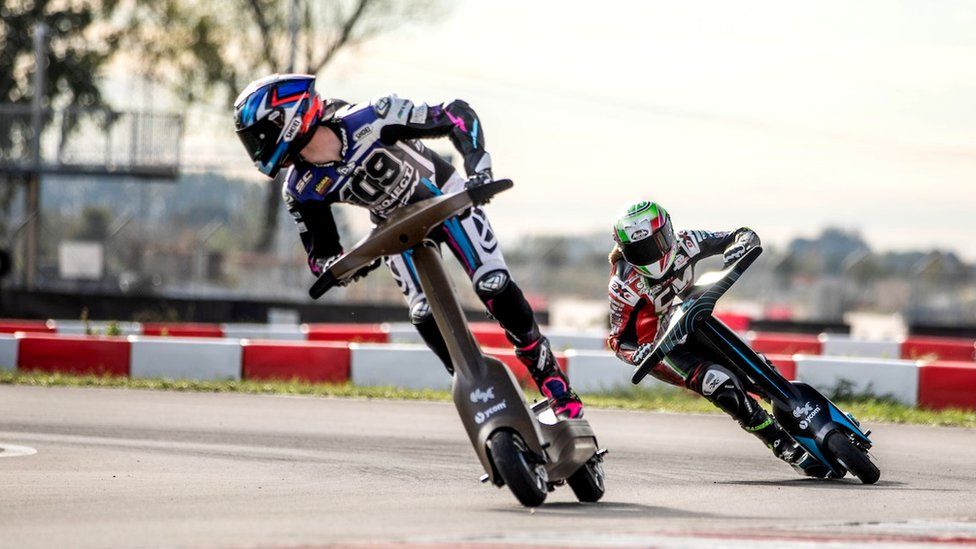 An electric scooter that can go 100 kmph (62 mph)? Meet the sleek new machine that’s designed to leave the clunky scooters you see buzzing around suburban High Streets, in the dust.

The S1-X, which was designed by his company, has inflatable tyres, a 1.5 kilowatt hour battery and a carbon fibre chassis. And according to Mr Scimeca, it offers an unexpectedly steady ride.

“What was really impressive was the confidence it gives to you,” he adds, recalling his own initial test-ride.

And, of course, there was no noise from the exhaust, instead, Mr Scimeca says he could hear the squeal of the electric motor as it sped up and down, and the thrum of the tyres as they gripped the track.

The S1-X is a brand new racing vehicle. It will be used by all competitors at next year’s eSkootr Championship, the world’s first e-scooter championship event.

But there are many other electric vehicle (EV) racing events popping-up across the country that are showcasing and championing important advances in EV technology.

Formula E has been around for years, but a flood of newer EV racing events have lately zoomed into view.

Others include the Extreme E race series, which launched earlier this year. In it, electric sports utility vehicles (SUVs) compete in a series of off-road events. And in 2022, SuperCharge will bring EV racing to city streets around the world.

“We feel like we are really inventing a new sport,” says Mr Scimeca, noting that his team had no real precedent on which to build when they began designing their racing e-scooter. They were even unsure as to how, exactly, riders would handle the vehicle.

It turns out to be a physically draining task. Riders of high-speed e-scooters have to quickly adjust their stance on almost every corner.

Mercifully, however, each heat in the eSkootr Championship will only last four or five minutes – partly because the relatively small battery embedded in the base of the scooter doesn’t last long.

A single charge might cover just three or four heats before the juice runs out, says Mr Scimeca.

For any EV racer, a flat battery means game over, so it’s something that the whole racing team needs to consider when turning cars around between heats, says Roger Griffiths, team principal at Andretti United Extreme E.

“All of us that came from conventional motorsport, we were very comfortable with operating internal combustion engine cars,” he explains.

“When we started running an electric racing car it was very much, ‘What on Earth are we doing here?’.”

It can take three to four hours, he says, to turn around a racing EV with a depleted battery, versus one hour for cooling, refuelling and checking over a hot Formula 1 car.

But there are completely different safety considerations, too, given the high-voltage electronics involved in running EV racing cars.

Last month, there were a series of Extreme E races in Sardinia and one of the cars, driven by Stéphane Sarrazin, was badly damaged in a barrel roll. In such cases, engineers must make absolutely sure there are no live electronics exposed, says Mr Griffiths. “You have to treat it with caution until you know the thing is safe,” he adds.

EVs also tend to be a bit heavier than traditional racing vehicles, due to their weighty batteries, however their weight distribution doesn’t change during the race unlike their counterparts running on liquid fuel which gets used up lap-by-lap. So, EVs handle slightly differently for drivers.

One of the goals of the Extreme E events is to showcase the capabilities and robustness of EVs. The track in Sardinia in Italy was a particularly tough test- being very dusty to begin with, and then increasingly damp as the racing weekend progressed.

For Extreme E, all drivers compete using a specially-designed electric SUV called the Odyssey 21. The cars get their power from on-site generators that use either biofuel or hydrogen, says Mr Griffiths: “We’re here to demonstrate that these cars can be green.”

The Odyssey 21’s are also demonstrating technology that could eventually make its way to more humble consumer EVs. A key example is the silicon carbide semiconductors found in Formula E and Extreme E cars. These semiconductors allow for significantly more efficient transfer of power within the vehicle – potentially offering dozens of miles of additional range on the same battery, says Mr Griffiths.

“In road cars, this technology is prohibitively expensive but it’s being developed in racing,” he adds.

That could bring silicon carbide to everyday EVs sooner than forecast. Interest from the consumer market is strengthening all the time. Analysis from global accounting and consultancy firm EY suggests that EVs will become dominant on roads in Europe by 2028, five years sooner than expected.

Ms Gibson has helped lead the adoption of EVs in British racing events.

“You know, I didn’t want to be too late in getting this off the ground in the UK.”

She explains that the short heats of five minutes or so in rallycross events – a mix between rallying and circuit racing- are perfect for electric cars, since they don’t need a lengthy charge to compete.

Ms Gibson fully supports the development of new EV racing vehicles and the involvement of famous teams and drivers to spur electric racing on.

She adds that while some petrol-heads will always grumble about the lack of exhaust noise from electric vehicles, the visual spectacle remains thrilling.