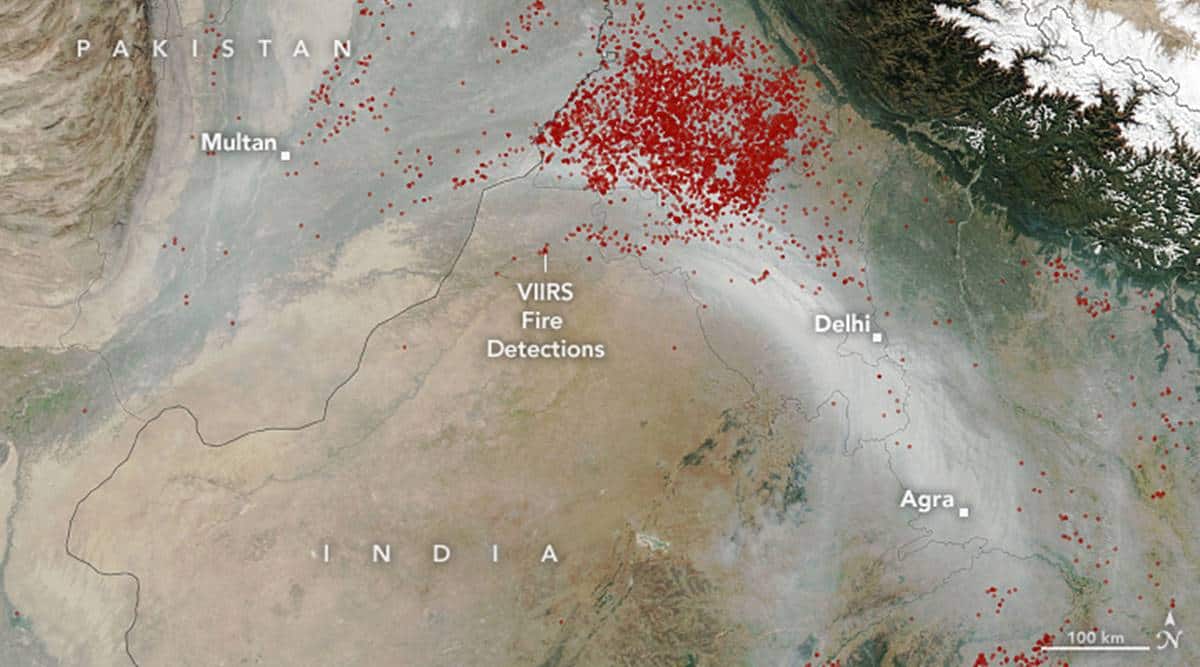 On November 11, NASA’s Suomi NPP satellite captured images of smoke arising from Punjab and Haryana and moving toward Delhi. NASA’s data shows this is the most active fire season on record since they started tracking the information, and likely explains the high levels of pollution in the city of Delhi.

The detection was made using the Visible Infrared Imaging Radiometer Suite (VIIRS) on the satellite, which helps track change in the ocean and land surface temperature and spots fire activity.  VIIRS-derived data is also used by climatologists to measure cloud and aerosol properties for a better understanding of global climate change.

The release from NASA noted that burning off excess paddy straw after the rice harvest caused the smoke plumes. “Looking at the size of the plume on November 11 and the population density in this area, I would say that a conservative estimate is that at least 22 million people were affected by smoke on this one day,” Pawan Gupta, a Universities Space Research Association (USRA) scientist at NASA’s Marshall Space Flight Center said in the statement.

He added that fire counts seem to be on the higher end in Haryana this year, though these had seen a drop in the state in 2020, compared to the 2012-2019 average.

Stubble burning emits fine particulate matter (PM2.5), and studies have shown that they can cause serious health problems ranging from eye irritation to cardiovascular and respiratory diseases to even cancer. Delhi’s AQI remains very poor for more than two weeks and the PM2.5 and PM10 levels remain well above the moderate/acceptable limits.

A recent study noted that about 126 million tons of rice straw is produced annually in India and 60 per cent of it is burnt on the field. Though the National Green Tribunal (NGT) has directed state governments to take action against those who burn crop residue, there is no proper implementation.

Hiren Jethva, a Universities Space Research Association scientist based at NASA’s Goddard Space Flight Center, who has been studying data from the Moderate Resolution Imaging Spectroradiometer (MODIS) on NASA’s Aqua satellite adds: “We still have a few weeks of burning to go, but already Aqua MODIS has detected more than 17,000 hotspots in Punjab and Haryana—making this the most active fire season on record.”

NASA’s experts also said that when it comes to total fire counts, they have remained consistently high in Punjab, though satellite data showed that campaigns to get farmers to clear fields without using fire proved more successful in Haryana. But this year, the fires are on this higher side again in Haryana as well.

NASA states that smoke from crop fires is not the only contributor to the pollution. Dust from the Thar Desert, air pollution from cities (vehicle fumes, industrial and construction activity, fireworks), and fires used for cooking also produce fine particulate matter. Meanwhile, farm fires in northern Pakistan also likely contributed to some of the smoke.