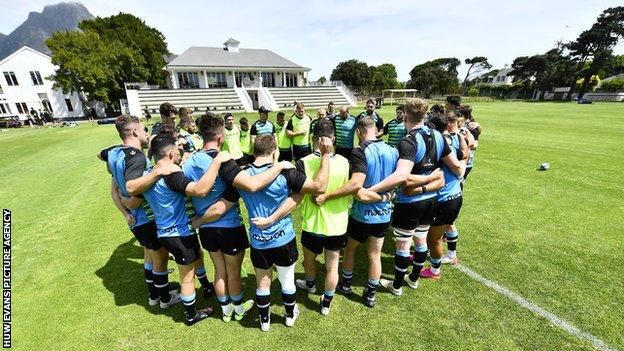 Cardiff and Scarlets are trying to return home from South Africa after the country was put on the UK red travel list.

That would mean two United Rugby Championship (URC) matches for each side being called off.

UK Health Secretary Sajid Javid said from 12:00 GMT on Friday, six countries would be added to the red list.

Any British resident arriving from the countries after 04:00 GMT on Sunday must quarantine in a hotel.

Those returning before that would be asked to isolate at home for 10 days.

Namibia, Zimbabwe, Botswana, Lesotho and Eswatini are the other African countries are on the red list.

The Welsh government has adopted travel rules for England in recent times and any direct flight into the UK from South Africa would usually land in England.

The teams are exploring trying to return home on Friday before the quarantine deadline with charter flights being considered.

Scarlets chairman Simon Muderack wrote on social media: “Many will have seen the news about the new Covid variant that affects our people in South Africa.

“We are focused on the welfare of our staff in South Africa and the concern of their families at home. We are exploring all options to repatriate our people asap.”

Cardiff and Scarlets were each due to play two games in South Africa. They were then scheduled to return to the UK for the Heineken Champions Cup campaign, which starts on 10 December.

Irish side Munster and Italian team Zebre are also currently in South Africa with all the teams playing in the URC.

Cardiff and Scarlets were meant to be the first Welsh teams to play in South Africa in the competition, which was launched for this season.

Scarlets were scheduled to play Sharks in Durban on Saturday, 27 November and Cardiff facing Lions in Johannesburg the next day.

Both Welsh sides were then to remain in South Africa, with Scarlets scheduled to face Bulls on Friday, 3 December at Loftus Versfeld, Pretoria, while Cardiff were due in Cape Town to face Stormers the following evening.

Those games will not now go ahead, but the Heineken Champions Cup action on 11 December for Cardiff and Scarlets against Toulouse and Bristol respectively might be played if the squads can return before the quarantine deadline.

Those European fixtures would still be in the balance if the Cardiff and Scarlets players have to quarantine at home for 10 days on their arrival in the UK.

The initial URC plan was to ask South African sides to return to Europe in November and December, but that was scrapped.

In October, competition bosses confirmed that round six and seven fixtures for Sharks, Stormers, Lions and Bulls would take place on their home soil.

The decision was taken because South Africa had been taken off the UK government’s travel red list, removing the need for quarantine on return.