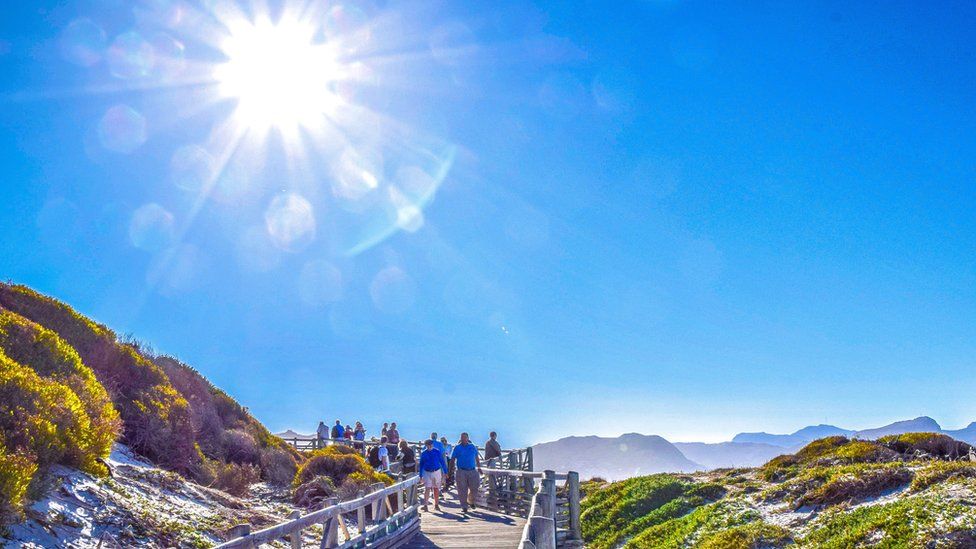 Coal is still South Africa’s primary source of electricity, despite the fact that many areas of the country average more than 2,500 hours of sunshine a year.

By contrast, the UK averages just 1,500 hours of annual sunshine – so, for South Africa to make better use of this abundant energy source to generate its own electricity would make a lot of sense.

Over the next decade this energy supply picture could change quite radically.

During the COP26 climate summit, the US, EU, UK, Germany and France pledged $8.5bn over the next five years, to assist South Africa’s big plan to go green.

But many question whether Eskom is capable of delivering such a huge transformation.

The company is staggering under a $27bn debt burden, which has hampered investment in its already ailing infrastructure. Rolling blackouts, known as “load-shedding”, are a common occurrence across the country.

It is clear something needs to be done. South Africa is the world’s 12th highest emitter of carbon dioxide and the highest emitter in Africa, according to the Global Carbon Atlas.

Even if Eskom decided to stick with coal, the company says it would need more than $20bn to make its ageing coal power plants compliant with South Africa’s current minimum emissions standards.

So, some kind of move to renewables seems inevitable, but industry insiders agree with Mr de Ruyter that his plan is ambitious.

Sharief Harris, head of development at Red Rocket Energy, a private green energy firm says that if there is any hope of transitioning to renewable energy, Eskom first needs to address its failing infrastructure and financial challenges.

Mr Harris also points out that as well as building solar plants and wind farms, Eskom would have to spend more money to connect them to the electricity network.

“Serious upgrades to the electricity grid will be required to connect any capacity to the grid and $10bn will not be sufficient,” he warns.

The power giant has acknowledged that, and recently estimated it would need around $35bn over the next 15 years, to make a successful transition to renewable power.

The hope is that there will be a ripple effect from the initial commitment of $8.5bn from the US and Europe, encouraging future investment from foreign private investors.

Meanwhile, South Africa’s transformation to greener energy might get some help from independent energy firms.

Until recently, restrictions and regulations on private power production hindered the solar industry’s growth in South Africa. But this year regulation changes have allowed commercial power firms to build much bigger power stations – up to 100 megawatts.

Red Rocket currently has two solar plants in operation in Africa and is planning further expansion.

The company also helped build one of Africa’s biggest solar power plants, the 75 megawatt Kathu plant in South Africa’s Northern Cape, which covers 800 hectares (2,000 acres) – it can produce enough electricity for 73,000 homes in the surrounding communities.

But South Africa will need hundreds more solar power plants, if it is to end its reliance on coal.

The switch to solar also faces significant political challenges. In a country with an official unemployment rate of 34%, there are questions over whether a transition to solar will be good or bad for the country’s workforce.

Eskom has challenged this assumption, and Mr De Ruyter says that rolling-out the solar infrastructure could generate over 300,000 jobs in South Africa.

In an attempt to address these uncertainties, the nations investing in South Africa’s green transition, say a task force will be established to create “green and quality jobs”.

It is hard to compare the jobs generated by solar power versus coal. Coal power stations provide job opportunities throughout the facility’s operational life, while renewable technologies see large numbers of jobs created during the initial construction phase, but require fewer workers once operational.

Yet, a more stable energy supply would benefit the country’s economy as a whole and might encourage more foreign investment, which would be good for employment.

The Solar Green Academy, which has five training centres across South Africa, has already seen an uptick in demand for its courses in anticipation of further investment. The academy provides technical training for people hoping to build a career in the solar energy industry.