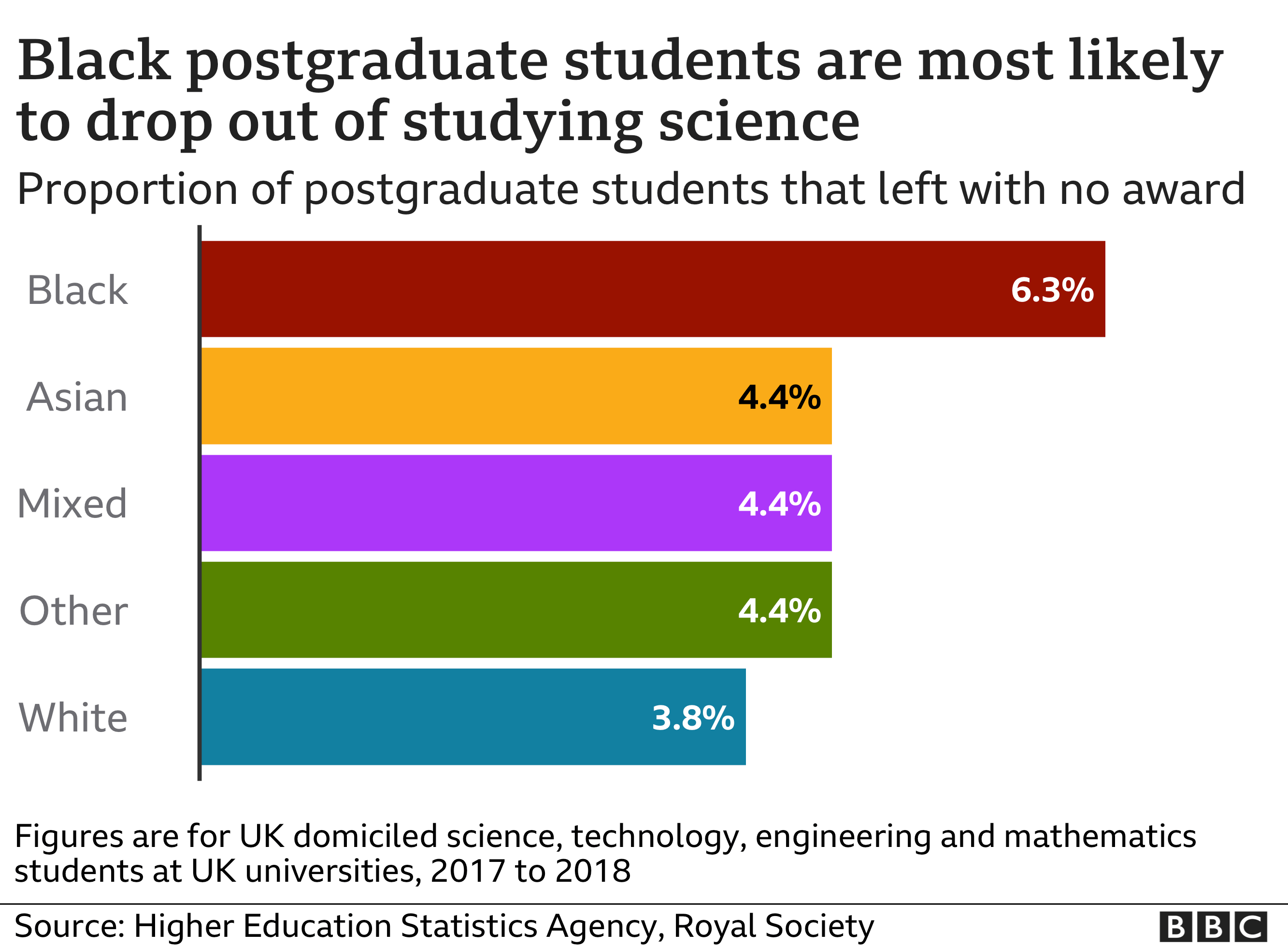 Universities have launched schemes to attract hundreds of ethnic minority students into research.

One analysis shows that out of nearly 20,000 PhD positions awarded over three years, 245 were to black students.

The head of the UK research funding body said she was “frustrated” that the skills of so many talented people were going to waste.

Jason Arday has recently been made a professor. As a young black academic, Prof Arday, currently at Durham, seems to be having a successful university career, but he says it has come at a cost.

“If someone asked me what the blueprint is to become an academic, I’d have to say that if you are black or Asian it is ‘how much can you suffer?’, whereas if you are white there is actually a blueprint about getting into academia because if you are a person of colour the goalposts move all the time,” he said.

Prof Dame Ottoline Leyser, chief executive of UK Research and Innovation (UKRI) said diversity was essential if researchers were to tackle some of the world’s most pressing problems.

“As we have seen with the climate change summit in Glasgow, there are huge challenges facing the world. And to solve these problems, you need different people with different ways of thinking and from different backgrounds,” she said.

“‘The current system is just too narrow and it absolutely needs to be opened up.”

UKRI has funded 13 projects to the tune of £8m. These are aimed at encouraging black, Asian and other ethnic minority students to study after their university degrees and to continue their careers in research. Twenty-five universities are involved, many of them working in partnership with NHS trusts, councils and businesses.

Among the projects are: the development of fairer admissions criteria for Oxford and Cambridge University, a project to lay the foundations for increasing the number of black, Asian and minority ethnic female professors and a scheme across the West Midlands to improve university cultures.

The projects vary in approach and emphasis, but broadly they aim to boost numbers of ethnic minority students at postgraduate level by encouraging them to do research and providing them with support though mentoring, training and advice.

The initiative stems from a report by the education consultancy, Leading Routes, called The Broken Pipeline. It revealed that between 2016 and 2019, out of nearly 20,000 PhDs awarded by research funders, 245 were awarded to black or black mixed students, with 30 of those being to those from black Caribbean backgrounds.

The latest figures from the Higher Education Statistics Agency show the disparity greatly increases as those black people who choose to do research attempt to progress up the career ladder: of the 22,795 professors in the UK, 155 are black and of those only 40 are black women.

The lead author of the report and founder of Leading Routes, Paulette Williams, is delighted with the announcement. But she told BBC News that there was no point in attracting more ethnic minority students into postgraduate research without also tackling the racism that she says drives so many talented people away.

“Otherwise, you have more people thrown into these toxic environments. Black people are not progressing, they are not having these careers that they aspire to because the biases still exist,” she said.

“I know of (black) students who lecturers have come up to and told them ‘students like you don’t stay, and that’s okay. If you want to go, it’s OK’, almost like they are comforting and reassuring them that it is okay to drop out, rather than providing them with the support that would help them stay.”

Prof Leyser acknowledges the suffering that many ethnic minority researchers are forced to endure.

“We have quite a lot of bullying and harassment in research and black people pick up a disproportionate amount of that because they are under-represented and so they are obvious targets,” she told BBC News.

The research environment can become toxic for minority groups, she says, because the research system itself is judged on “a narrow set of metrics”. This includes throughput of research and publication in leading scientific journals.

“But the narrower you get, the narrower the people you have and the more you exclude people who don’t have the opportunity to meet those criteria.”

“Fundamental to (changing) this is a shift in culture of the research system, so that it is more enthusiastic about difference.”

Dr Mike Sulu, who is involved in a project at University College London to help ethnic minority students into postgraduate studies, said that universities needed to rethink how they recruited people to become researchers. The current system selects the students that get the best results in their undergraduate degrees.

“Being a good researcher is very different to academic study. Research is more about becoming immersed in a field and your passion. These things are harder to measure, which is why people traditionally don’t try to measure them,” he said.

The UK’s most influential scientific body, the Royal Society, has been holding round table discussions between representatives from minority ethnic groups, funders and other figures from the research community to understand why black researchers in particular are not progressing in their careers – and to find tangible solutions.

Prof Sir Adrian Smith, president of the Royal Society, who has been present at some of the discussions, has described the current situation as “unacceptable”.

“The meetings have left no doubt about the challenges black researchers in particular face in building their academic career. They have also shown clear recognition, right across the sector, of the need to address these systemic issues, together and over the long-term,” he said.

“While we collectively work to address the system issues, the Royal Society is investigating what it might do through its own programmes to provide effective and meaningful support to researchers from underrepresented groups.”

Chris Millward, from the Office for Students, which co-funded the projects with Research England said the initiative would mean that the country would benefit from the talents of people from all backgrounds.

“The projects will ambitiously tackle the issues causing underrepresentation of Black, Asian and minority ethnic students in postgraduate research, with the aim of stimulating innovation and developing effective practice for universities and colleges throughout the country.”