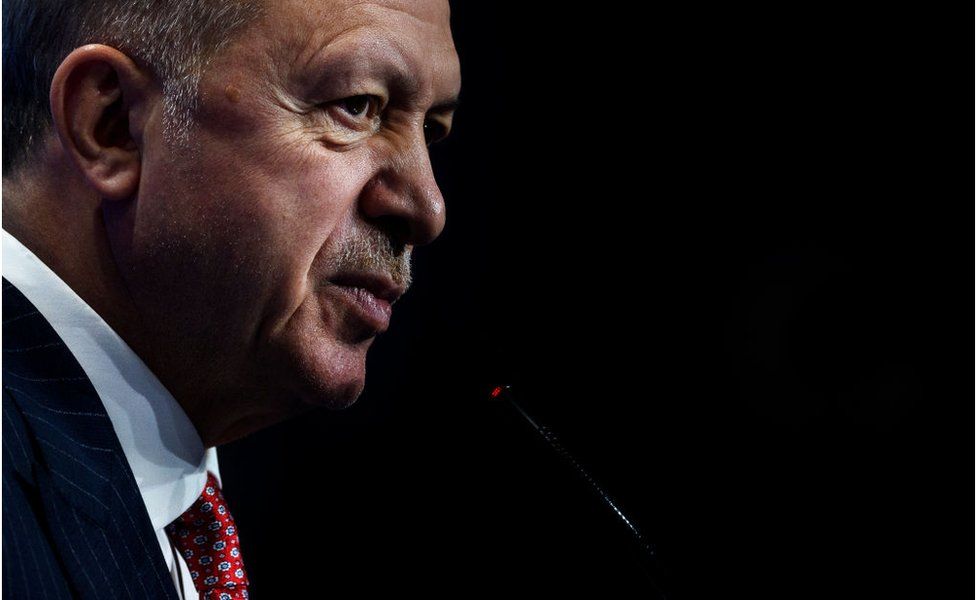 The Turkish lira nose-dived 15% on Tuesday after President Tayyip Erdogan defended a controversial plan to cut interest rates to boost the economy.

The currency hit a record low of just over 13 lira to the dollar, before recovering slightly, marking 11 straight days of falls.

But this has been blamed for driving up inflation which is now at 20%.

Investors are losing confidence and the lira has shed some 45% of its value this year, making it the world’s worst performing currency.

Despite this, Mr Erdogan vowed to stick to his policies on Monday, arguing that high interest rates would not lower inflation – an unorthodox view he has repeated for years.

“I reject policies that will contract our country, weaken it, condemn our people to unemployment, hunger and poverty,” he said after a cabinet meeting.

“We see the game played by those over the currency, interest and price hikes… and show our will to proceed with our own game plan,” he added.

The president and his allies argue that lower interest rates will boost Turkish exports, investment and jobs. But many economists say the rate cuts are reckless.

It is, to say the least, an unconventional view. Orthodox thinking is the opposite: that raising rates encourages saving, reduces expenditure and as a result slows price increases.

The president is determined that it’s his way or the highway. In March, he sacked the Bank’s governor, Naci Agbal – who had been hiking interest rates aggressively. Two of his deputy governors soon followed.

Now Mr Erdogan is in control. Last week saw the latest in a series of rate cuts, the trigger for an ever-deeper decline in the value of the lira.

Yesterday, he said the country was embroiled in a battle for its “economic independence”.

It is also involved in what looks like a rather hazardous economic experiment.

Former central bank deputy governor Semih Tumen, who was dismissed by the president last month amid a leadership shake-up, called for a return to policies which protect the lira’s value.

“This irrational experiment which has no chance of success must be abandoned immediately and we must return to quality policies which protect the Turkish lira’s value and the prosperity of the Turkish people,” he said on Twitter.

Opinion polls suggest Mr Erdogan’s AK Party is losing support because of the situation, and opposition politicians have appealed for early elections.

However, he has the backing of his party and other allies in Turkey’s parliament.

Tuesday’s slide was the lira’s worst since the height of a currency crisis in 2018 that led to a sharp recession, and brought on three years of weak economic growth and double-digit inflation.

Though the lira recovered half of its losses by 2pm UK time on Tuesday, the last 11 days have been its worst run since 1999.

French investment bank Societe Generale predicts rates will rise to about 19% by the end of the first quarter of 2022. Currently the country’s benchmark rate is 15%.

“Right now locals seem content to keep their dollars in the local system. If they start to move money elsewhere, to Germany, to Austria, it’s another story,” Mr Solot told the Reuters news agency.

“At that point we are talking capital controls. There are not enough dollar reserves, not enough dollars in the system to handle that. Then we will have a conversation about a real currency crisis,” he added.