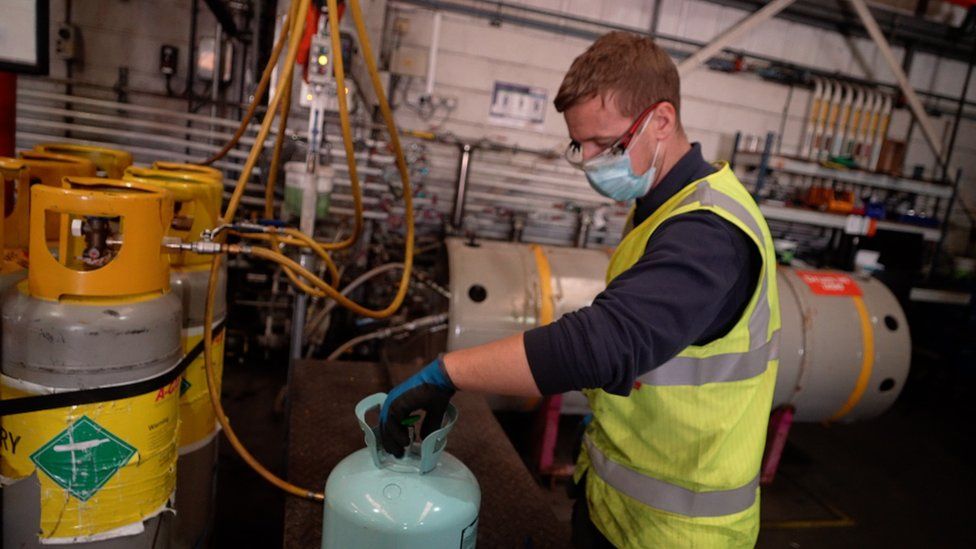 A BBC investigation has uncovered a black market in highly polluting greenhouse gases being smuggled into the UK from Eastern Europe.

The gases – hydrofluorocarbons (HFCs) – are advertised and sold illegally via social media and the BBC found a trader suggesting smuggling them on coaches.

The EU and UK are limiting their use and want to eventually phase them out in favour of cleaner alternatives.

But older machinery still runs on the most polluting HFCs – which has led to a black market worth millions.

UK law states only registered companies can import, sell or use HFCs; and buyers must show an F-Gas (fluorinated gas) certificate, otherwise no sale would be allowed.

The BBC’s investigation began at the Romania-Ukraine border, where HFCs made in China have been smuggled through in the boots of cars or in lorries.

We found scores of online adverts posted by local traders offering the gases for sale and met one trader, called “George”, who said he could get large quantities of HFCs.

After directing us to a quiet country road near the border crossing, he opened the boot of his car to reveal two canisters containing HFCs.

To get the gases into the UK, he suggested smuggling them in the luggage compartments of passenger coaches that leave from the local bus station.

He said he previously sent 70 or 80 at a time to Germany using this method – it was just a question of finding the right driver and paying them.

Hydrofluorocarbons (HFCs) were developed as alternatives to ozone-depleting chemicals, which were banned under a global 1987 agreement known as the Montreal Protocol.

The deal banned the use of chlorofluorocarbons (CFCs), which were gradually replaced by HFCs.

HFCs are man-made, colourless and odourless.

They are mainly used in air conditioning, industrial chillers and fridges and can also be found in some aerosol propellants and fire protection fluids.

But they are powerful greenhouse gases, with some HFC blends thousands of times more potent than carbon dioxide.

Fin Walravens, a senior campaigner for the Environmental Investigation Agency, which investigates and campaigns against environmental crime, said the illegal HFCs trade was one most people knew nothing about – but the “huge profits” on offer made it “very attractive” to criminals.

Bottles made and filled with the gases for under £30 in China can sell in the UK for more than £200.

Ms Walravens urged customs and enforcement agencies to recognise that while HFCs might be invisible gases, they had “a huge impact on global warming”.

Mihai Stoica, executive director of Romanian environmental campaign group 2Celsius, called for the authorities to work together to urgently stop the trade.

“I think this should have happened yesterday, we need to do as much as we can as quickly as possible.”

Despite the efforts of the authorities, the illegal HFC bottles are distributed across the EU and into the UK.

The BBC found them openly advertised for sale on Facebook marketplace across the country.

We contacted one seller in North London. He was not registered to handle the gases and offered them for sale in disposable canisters – which have been outlawed since 2006.

The illegal HFCs trade was estimated to make up between 20% and 30% of the whole European market, according to a July report by the EIA.

Rob Parker, European operations director for established supplier A-Gas, said the illegal HFCs trade was sometimes viewed as a “victimless crime because it looks like nobody gets hurt”.

“But the profits from this will almost certainly be going back into organised crime where they’ll be used for much darker activities,” he added.

“Ultimately, more global warming can take place because the regulation hasn’t been upheld.”

A spokeswoman for the UK’s Environment Agency (EA) said: “We are firmly committed to ensuring that businesses comply with regulations to reduce emissions from HFCs, and will take strict enforcement action where necessary.”

In September, the EA fined a company more than £1m for breaching F-gas regulations – exceeding the quotas of what it was allowed to put on the market.

It was only the second time the EA had ever imposed fines on a UK company for breaking the regulations.