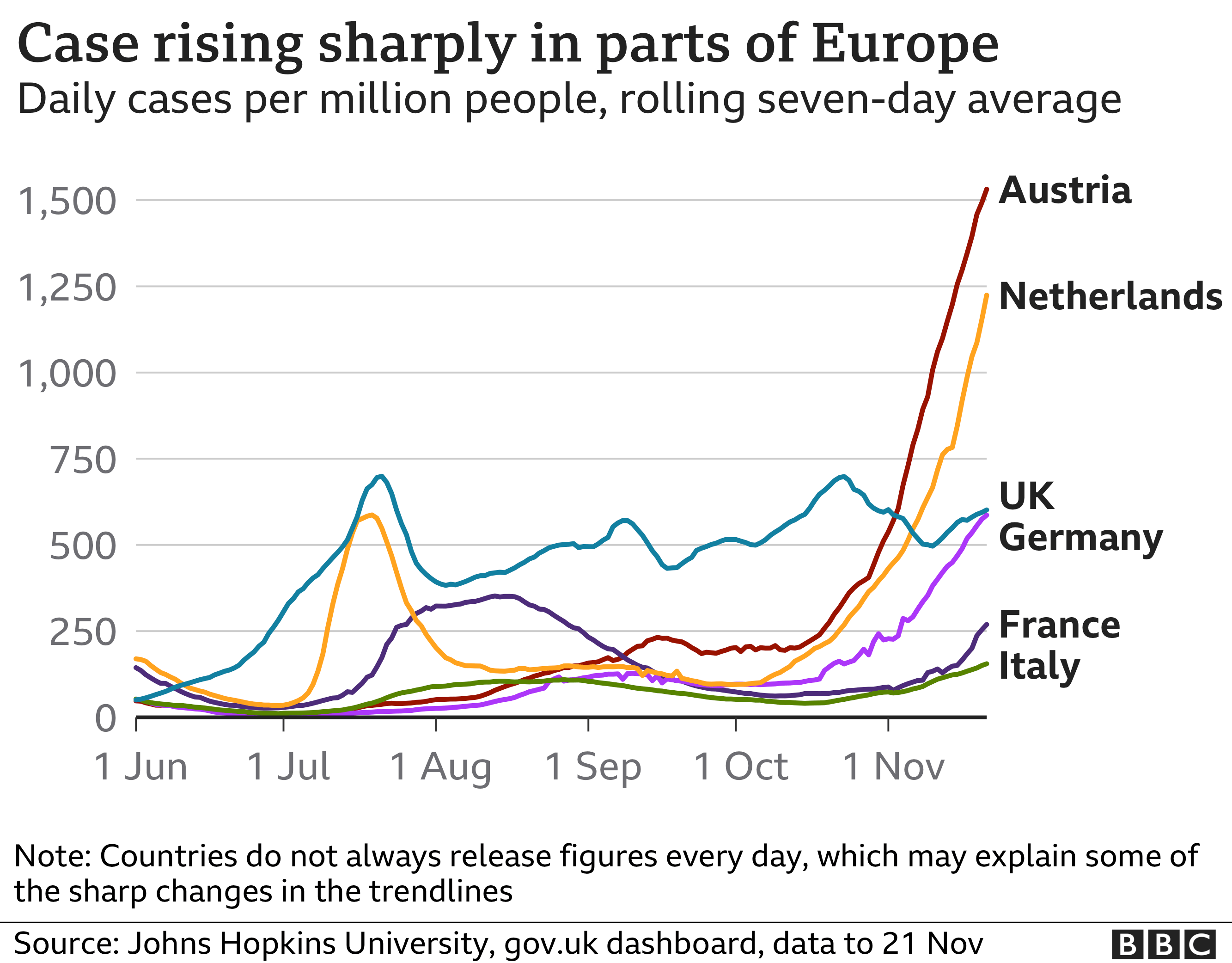 Austria has returned to a full national lockdown as protests against new restrictions aimed at curbing Covid-19 infections spread across Europe.

From midnight, Austrians have been asked to work from home and non-essential shops have closed.

New restrictions have sparked protests throughout Europe. People clashed with police in the Netherlands and Belgium.

Infection rates have risen sharply on the continent, prompting warnings from the World Health Organization (WHO).

On Saturday WHO regional director Dr Hans Kluge told the BBC that unless measures were tightened across Europe – such as on vaccines, wearing masks and with Covid passes for venues – half a million more deaths could be recorded by next spring.

Last week Austria became the first European country to make Covid vaccination a legal requirement, with the law due to take effect in February. Politicians in neighbouring Germany are debating similar measures as intensive care units there fill up and case numbers hit fresh records.

‘A sledgehammer’ to cut cases

This is Austria’s fourth national lockdown since the pandemic began.

Authorities have ordered residents to stay home for all but essential reasons, including work, exercise and shopping for food.

Restaurants, bars, hairdressers, theatres and non-essential shops must all close their doors. These measures will continue until 12 December, although officials said they will be reassessed after 10 days.

“A lockdown, a relatively tough method, a sledgehammer, is the only option to reduce the numbers [of infections] here,” he told the broadcaster.

Tens of thousands of people protested in the capital Vienna ahead of the lockdown. Brandishing national flags and banners reading “Freedom”, protesters shouted “Resistance!” and booed the police.

Resinger Harald, a 62-year-old from the southern Carinthia region, is fully vaccinated and feels the lockdown is not necessary.

“It will hurt some of the smaller businesses severely and they might run into financial difficulties,” she told the BBC.

Jennifer Wall, a British woman who moved to Vienna about two years ago, has also been double-jabbed. She described the protests over the weekend as “disruptive” and “scary”.

“The situation here is really tense,” she said. “There is a clear divide between vaccinated and not vaccinated.”

About 65% of Austria’s population is fully vaccinated – one of the lowest rates in Western Europe. The country’s daily vaccination rate has risen sharply in November, but some people are still hesitant.

In Vienna, one unvaccinated woman told the BBC that Austria’s plan to make vaccinations compulsory amounted to a “restriction of human rights”. “It’s always a person’s choice,” she said.

In Belgium’s capital, Brussels, demonstrators clashed with police after tens of thousands of people marched through the city centre.

Protesters are mainly opposed to Covid passes that stop the unvaccinated from entering cafes, restaurants and entertainment venues.

The march started peacefully but some launched stones and fireworks at officers, who responded with tear gas and water cannon.

Across the border in the Netherlands, rioting took place for the third night in a row.

Local media report that police arrested 15 people in the southern city of Roosendaal where a primary school was set ablaze. An emergency order has also been imposed in the town of Enschede to keep people off the streets overnight.

Four people thought to have been hit by police bullets remain in hospital, authorities said on Sunday.

The Netherlands is under a three-week nationwide partial lockdown, forcing restaurants to shut earlier and banning fans at sports events.

Protesters are also angry at a ban on fireworks on New Year’s Eve and government plans to introduce a vaccine pass for indoor venues.

Thousands of demonstrators were also on the streets in Croatia’s capital Zagreb on Saturday, while in Denmark around 1,000 people protested in Copenhagen against government plans to order public sector workers to be vaccinated in order to enter workplaces.

The French Caribbean department of Guadeloupe, meanwhile, has been rocked by three days of looting and vandalism, over a mandatory vaccine order for health workers as well as high fuel prices.

Some 38 people were reportedly arrested and special police forces were sent to the island on Sunday in a bid to quell the unrest after protesters ransacked and torched shops.

Are you in Austria? How will the lockdown affect you? Email: [email protected].