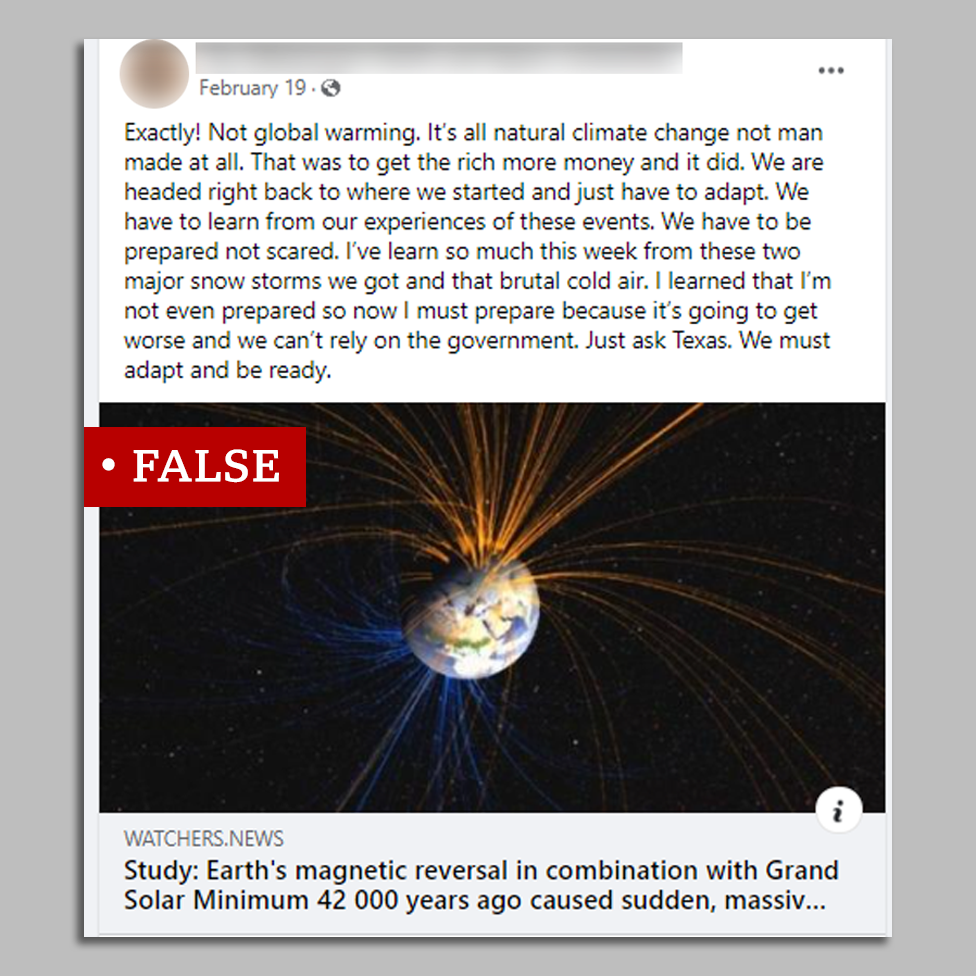 As world leaders met at the COP26 summit to debate how to tackle climate change, misleading claims and falsehoods about the climate spiralled on social media.

Scientists say climate change denial is now more likely to focus on the causes and effects of warming, or how to tackle it, than to outright deny it exists.

We’ve looked at some of the most viral claims of the past year, and what the evidence really says.

The claim: A ‘Grand Solar Minimum’ will halt global warming

People have long claimed, incorrectly, that the past century’s temperature changes are just part of the Earth’s natural cycle, rather than the result of human behaviour.

In recent months, we’ve seen a new version of this argument.

Thousands of posts on social media, reaching hundreds of thousands of people over the past year, claim a “Grand Solar Minimum” will lead to a natural fall in temperatures, without human intervention.

But this is not what the evidence shows.

A grand solar minimum is a real phenomenon when the Sun gives off less energy as part of its natural cycle.

Studies suggest the Sun may well go through a weaker phase sometime this century, but that this would lead, at most, to a temporary 0.1 – 0.2C cooling of the planet.

That’s not nearly enough to offset human activity, which has already warmed the planet by about 1.2C over the past 200 years and will continue to rise, possibly topping 2.4C by the end of the century.

Heat which would normally be released into the stratosphere is being trapped by greenhouse gases like carbon dioxide from people burning fuel.

If temperature changes on Earth were being caused by the Sun, we would expect the whole atmosphere to warm (or cool) at the same time.

The claim: Global warming is good

These arguments often cherry-pick favourable facts while ignoring any that contradict them.

For example, it’s true that some inhospitably cold parts of the world could become easier to live in for a time.

But in these same places warming could also lead to extreme rainfall, affecting living conditions and the ability to grow crops,

At the same time, other parts of the world would become uninhabitable as a result of temperature increases and rising sea levels, like the world’s lowest-lying country, the Maldives.

There may be fewer cold-related deaths. According to a study published in the Lancet, between 2000 and 2019, more people died as a result of cold weather than hot.

However, a rise in heat-related deaths is expected to cancel out any lives saved.

The UN’s Intergovernmental Panel on Climate Change (IPCC) says overall, “climate-related risks to health [and] livelihoods…are projected to increase with global warming of 1.5 degrees”. Any small local benefits from fewer cold days are expected to be outweighed by the risks of more frequent spells of extreme heat.

A common claim made by those against efforts to tackle climate change is that fossil fuels have been essential to driving economic growth.

So limiting their use, the argument goes, will inevitably stunt this growth and increase the cost of living, hurting the poorest.

But this isn’t the whole picture.

Fossil fuels have powered vehicles, factories and technology, allowing humans over the past century to make things at a scale and speed which would previously have been impossible. This enabled people to make, sell and buy more things, and become richer.

But stopping using coal doesn’t mean returning to the days of ox-drawn carts and hand-cranked machines – we now have other technologies that can do a similar job.

On the other hand, studies predict that if we don’t act on climate change by 2050, the global economy could shrink by 18% because of the damage caused by natural disasters and extreme temperatures to buildings, lives, businesses and food supplies.

Such damage would hit the world’s poorest the hardest.

Misleading posts claiming renewable energy failures led to blackouts went viral earlier in the year, when a massive electricity grid failure left millions of Texans in the dark and cold.

These posts, which were taken up by a number of conservative media outlets in the US, wrongly blamed the blackout on wind turbines.

He says the claim that renewable energy causes blackouts is “nonsensical…. Venezuela has oodles of oil and frequent blackouts”.

According to Jennie King from the think tank ISD Global, this discrediting of renewable energies is a “key line of attack for those keen to preserve reliance on, and subsidies for, oil and gas”.

There’s no doubt some wildlife, including birds, are killed by wind turbines.

But according to the LSE’s Research Institute on Climate Change and the Environment: “The benefits for wildlife of mitigating climate change are considered by conservation charities… to outweigh the risks, provided that the right planning safeguards are put in place, including careful site selection.”