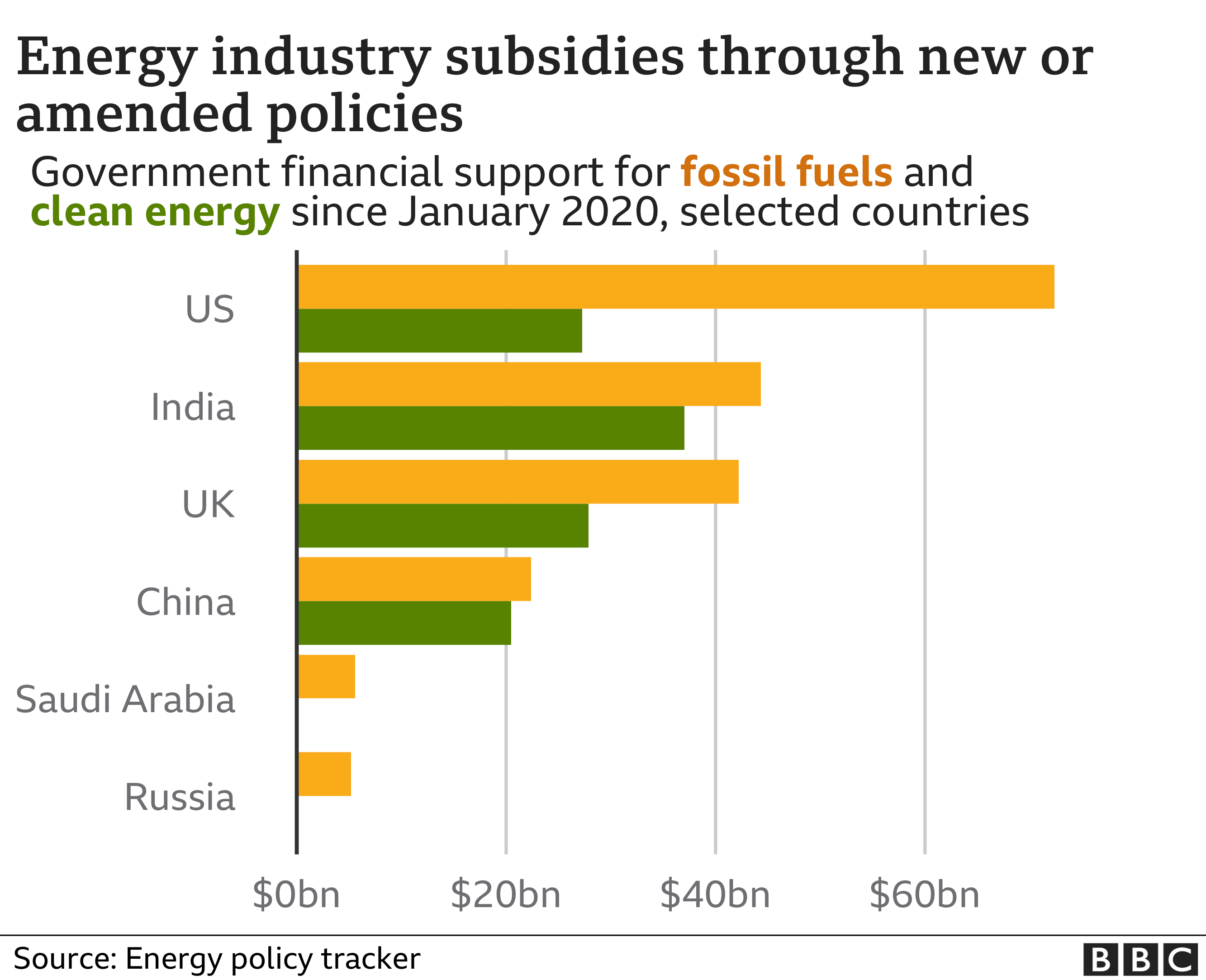 Despite pledges to limit support, governments around the world spend more than $420bn (£313bn) each year subsidising the non-renewable energy, according to the UN Development Programme.

How do fossil fuel subsidies work and which countries are spending the most?

What are fossil fuel subsidies?

Fossil fuel subsidies are measures taken by governments that artificially lower the price of coal, oil, or natural gas.

Transparency on fossil fuel funding is generally poor, but about three-quarters of the world’s subsidies are estimated to be focused on consumers, and a quarter on producers.

Consumption subsidies are often seen in lower-income countries – largely to help alleviate poverty through measures that can make cooking gas cheaper, or lower the cost of transport.

Iran topped the list for consumption subsidies for 2019 – according to data from the International Energy Agency (IEA) – followed by China and India, all of whom subsidise petrol prices.

What action is being taken to phase them out?

An agreement published at the end of COP26 climate summit called on all countries to accelerate the phasing-out of “inefficient” subsidies for fossil fuels – but no firm dates have been set.

All countries in the G7 – representing the world’s largest advanced economies – have previously committed to phase out “inefficient” fossil fuel subsidies by 2025.

The IEA defines an “inefficient” subsidy as something that encourages wasteful consumption.

“If you look globally, you can see there is progress on phasing out subsidies, but it is slow,” says Peter Wooders, senior director at the International Institute for Sustainable Development (IISD).

“Within the G7 members there’s been some progress on subsidy reform, but it’s been quite limited – they really need to do better and it’s obviously inconsistent with climate pledges,” he adds.

Support for fossil fuels across 81 major economies has been declining in recent years but was still more than $350bn in 2020.

What about support for clean energy?

The Energy Policy Tracker has collected data on how major countries have enacted new policies since January 2020 to help fund the energy industry.

It found that since the start of 2020, the world’s major economies have spent more funding fossil fuels through new or amended policies than clean energy.

The definition of a subsidy is broader than the IEA and Organisation for Economic Co-operation and Development (OECD) estimates, so the overall figures are higher, but they give us an idea of how countries are funding clean energy compared with fossil fuels.

The US and the UK have invested in clean energy, but they have still spent significantly more funding fossil fuels, according to the data.

In January this year, Mr Biden signed an order to stop fossil fuel subsidies – pledging to eliminate government support by 2022.

The Environmental and Energy Study Institute estimates direct subsidies to the fossil fuel industry in the US amount to $20bn per year – 80% of which goes towards oil and gas.

On top of this, the US provides a number of tax breaks to the fossil fuel industry to encourage domestic energy production.

Mr Johnson announced in December 2020 that the UK would stop supporting the fossil fuel industry overseas.

China and India have been increasing investment in renewable energy – but they remain amongst the world’s largest public financiers of fossil fuels, spending tens of billions of dollars every year by subsidising both their production and consumption.

Saudi Arabia and Russia have long-standing policies of subsidising fossil fuel consumption through low energy prices, because of vast natural resources of oil and natural gas.

According to the IISD, Saudi Arabia is doing the least of the G20 countries to phase out fossil fuel funding.

It has joined other G20 nations in a pledge to phase out inefficient fossil fuel subsidies, but no target date has been set.

The COP26 global summit, in Glasgow, in November, is seen as crucial if climate change is to be brought under control. Almost 200 countries are being asked for their plans to cut emissions – and it could lead to major changes to everyday lives.