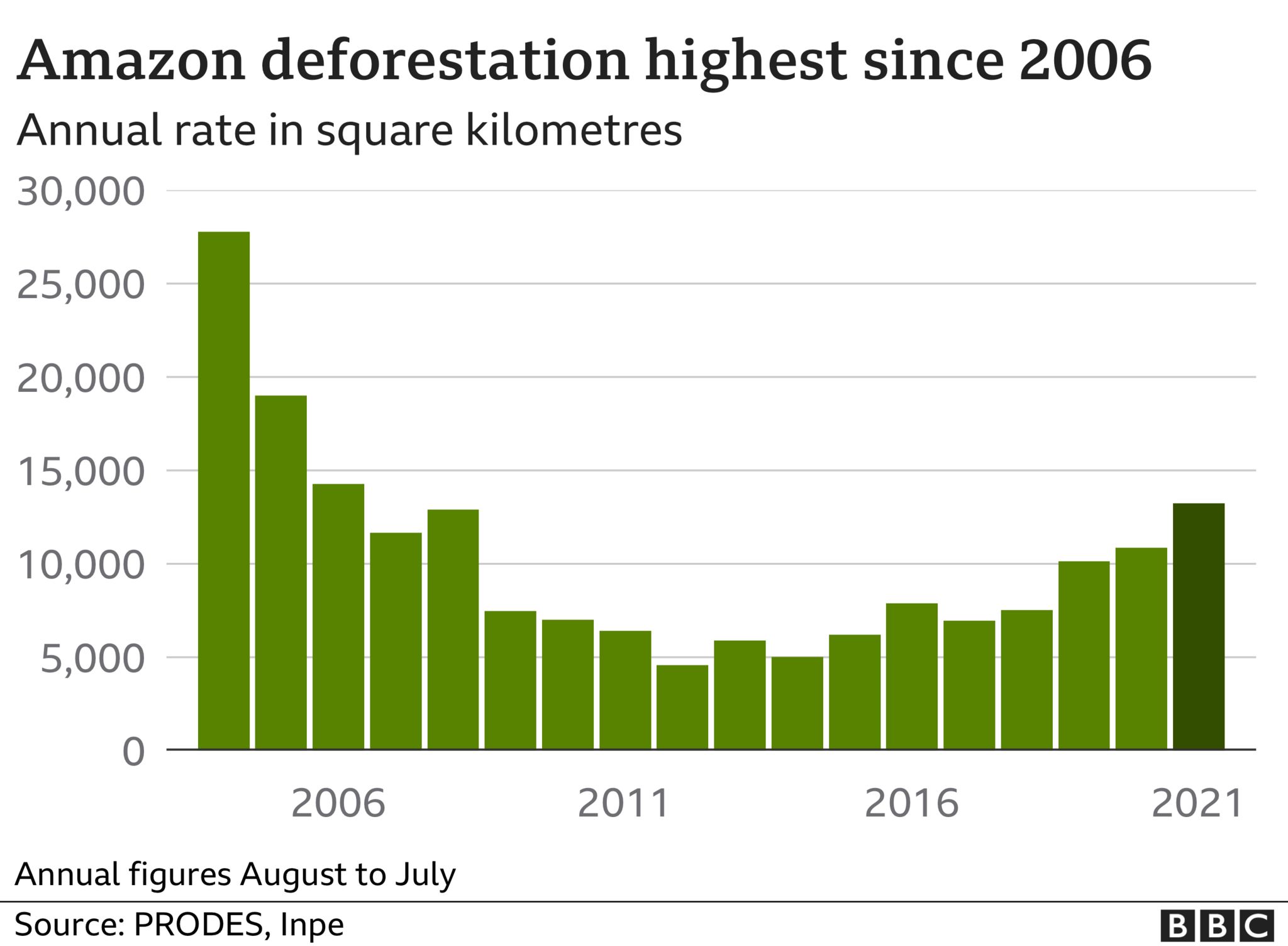 Deforestation in Brazil’s Amazon rainforest has hit its highest level in over 15 years, official data shows.

A report by Brazil’s space research agency (Inpe) found that deforestation increased by 22% in a year.

Brazil was among a number of nations who promised to end and reverse deforestation by 2030 during the COP26 climate summit.

The Amazon is home to about three million species of plants and animals, and one million indigenous people.

It is a vital carbon store that slows down the pace of global warming.

Environment Minister Joaquim Leite said the data represents a “challenge” and said: “We have to be more forceful in relation to these crimes.”

He added that the data “does not exactly reflect the situation in the last few months”.

Deforestation of the Amazon has increased under President Jair Bolsonaro. who has encouraged agriculture and mining activities in the rainforest.

He has also clashed with Inpe in the past over its deforestation, accusing the agency in 2019 of smearing Brazil’s reputation.

But at November’s climate conference in Glasgow, Brazil was among a number of nations who signed a major deal to end and reverse the practice.

The pledge included almost £14bn ($19.2bn) of public and private funds. Some of that will go to developing countries to restore damaged land, tackle wildfires and support indigenous communities.

Close links have previously been uncovered between the deforestation of the Amazon and international supply chains.

Last year, a Greenpeace investigation discovered links between the mass deforestation of the region and food sold in British supermarkets and restaurants.

The investigation found that Tesco, Asda, Lidl, Nando’s and McDonalds were selling meat, sourced from a UK supplier, which had been fed on soy grown on farms built in deforested areas.

Just this week, Jair Bolsonaro, on tour in Dubai, told investors that attacks towards Brazil on deforestation were “unfair”.

“We want people to know the real Brazil,” he said, adding that 90% of the forest is still preserved.

Well, these latest figures reveal the real Brazil – a country whose government has from the very beginning talked up the opportunities in developing the Amazon and at the same time, belittled environmental concerns.

Not only that, these figures were actually dated 27 October – it appears they were held until after COP26.

Jair Bolsonaro didn’t turn up to COP26, but his delegation wanted to go to Glasgow and convince the world that people were wrong about Brazil – it even said it would move forward its commitment to ending deforestation by 2028.

But with numbers like these, who can believe Jair Bolsonaro now?