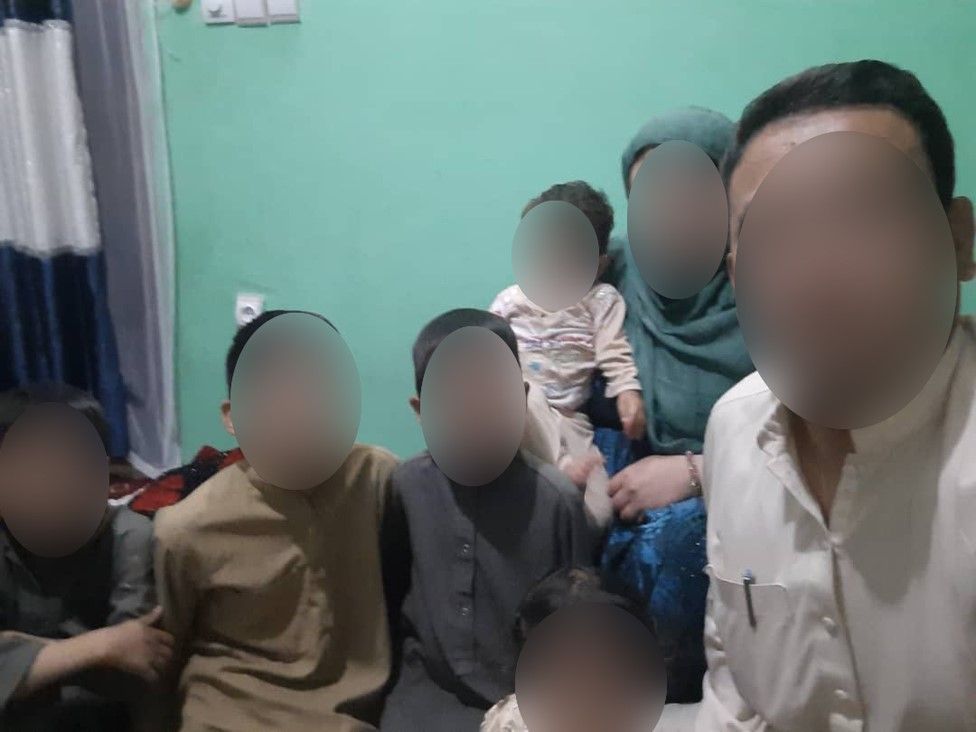 Sheltering in a hideout on the outskirts of Kabul, Abdul says he is waiting for the day he is found and killed by the Taliban.

He is one of 11 Afghan interpreters the BBC has spoken to who have been stopped from relocating to the UK, despite initially being told they were eligible for a move.

They received letters saying they were “eligible for relocation” to Britain under a government scheme to get former interpreters who had worked for British forces to safety.

But the relocation was subject to passing immigration checks – and in the final stages, the Home Office blocked them on national security grounds.

They were told their presence in the UK would not be “conducive to the public good”.

The men, whose names have been changed for their safety as they fear retribution from the Taliban, have not been given any details about why they were deemed a threat. They say they have done nothing wrong.

Their supporters in the UK are calling for them to be given the opportunity to have their cases reviewed and have criticised the lack of transparency around the decisions.

‘We don’t know where to go’

When officials from the UK’s Ministry of Defence told him in July he was eligible to relocate, Abdul was relieved.

Having worked in the past with British troops in Helmand, he was worried he would be a target for retribution when the Taliban started taking over Afghanistan.

He says he was told to prepare for a flight out of the country within two weeks. He sold most of his possessions, and prepared to quit his job.

But on 11 August, as the Taliban closed in on the capital, he received a letter telling him his visa application had been refused on “national security” grounds with no right of appeal.

Abdul, a UN employee who also worked for the British embassy and for the Afghan government after leaving the army, was shocked by the decision.

“I have worked with the British embassy. And the UN has zero tolerance for misconduct,” he says. A UN spokesperson confirmed to the BBC he had passed background checks for his work there as recently as 2019.

“I have never engaged in any criminal acts,” Abdul says. “But I have worked shoulder to shoulder with British soldiers.”

While serving with British troops in Helmand Province, a commanding officer praised Abdul’s “loyalty, trustworthiness and complete professionalism” in a service certificate.

He now fears the Taliban will find and kill him, his wife, and his young children.

After hearing rumours that Taliban fighters were carrying out door-to-door searches, Abdul fled Kabul in late August with his family. “I’m trying to do anything to get out of this situation. But we don’t know where to go,” he says.

Another rejected interpreter, Sayed, has built a makeshift hideout in the bushes behind his home.

He told his relatives to tell anyone who comes to his house that he is away. Once a week, after night falls, he takes a taxi into the city centre to buy food for his family.

He has shown the BBC a Taliban death threat he says he received a decade ago. In it, the militants warn he will be sent “to the depths of hell” for “working for the infidels”.

After serving with the British, he worked for a firm contracted to the UN, and later a logistics company.

He applied to the UK’s Afghan Relocations and Assistance Policy (Arap) – a scheme allowing Afghans who worked for the British military and UK government to be able to move to the UK permanently.

In April, he was told he was eligible for a move to the UK.

But in August, days before Kabul fell to the Taliban, the Home Office told him he would pose a security threat because of his “conduct, character and associations”.

Sayed was perplexed. “What is my sin?” he asks. “That I worked shoulder to shoulder with the British? I have no crime, I am not a criminal, I have done nothing wrong.”

To add to the confusion, a fortnight later he received a Ministry of Defence email telling him to go to Kabul airport to be evacuated. But he was unable to make it through the chaos outside.

Although the last Western military flights have left, he is still desperate to flee Afghanistan.

“We are still hoping for our fate, the fate of our children,” he says. “But I still feel so scared because these people will find me.”

‘We have no faith in the process’

These stories, and those of nine others in a similar situation documented by the BBC, have prompted calls for the rejected cases to be reviewed.

“We have no faith in the process. The evidence is not seen. There is no opportunity to challenge the evidence and there’s no appeal against it,” he says.

The Home Office did not want to comment on individual cases.

But a government spokesperson told the BBC: “There are people in Afghanistan who represent a serious threat to our national and public security.

“That is why thorough checks are taking place by government, our world-class intelligence agencies and others and if someone is assessed as presenting as a risk to our country, we will take action.”

The UK, and other Western nations who are resettling Afghans, have been on high alert for possible abuses of the evacuation process.

In August, a person on the UK’s no-fly watch list was flown into Birmingham as part of the initial evacuation effort, although they were later not deemed a person of interest.

And in the first half of September, the US government flagged 44 Afghans it had evacuated as security threats, according to the Washington Post. Fifteen of them have now been returned to sites in Europe and the Middle East.

Conservative MP Tom Tugendhat – chairman of the Foreign Affairs Committee – has called for clarity on how the decisions had been made.

“For every day that passes, the danger rises for the people we’ve promised to help,” he said. “There will be legitimate reasons why some cases are refused, but transparency as far as possible in the decision-making process will be important to avoid urgent cases falling through the cracks.”

Labour MP Diane Abbott, who sits on the Home Affairs Committee, said the interpreters should be able to appeal.

“Accepting refugees and then denying them is very odd. There may be grounds for this, but at the very least the Home Office has a duty to provide some transparency and to allow appeals.

“The people of Afghanistan have been treated very badly by this and previous governments. They must not compound that now by mistreating refugees.”

Two interpreters who were deemed eligible but later blocked by the Home Office did manage to make it out of Afghanistan on Danish military flights.

One of them, Ali, who worked with Danish as well as British troops, is now with his family in a city in eastern Denmark.

After being told he was eligible for resettlement to the UK, he sold his house in Helmand Province.

In the weeks that followed, he would check his emails first thing each morning, expecting news of a flight out of Kabul.

“When I saw the notification on my phone I was really excited,” he recalls. “But when I opened the message I was really shocked.”

“I couldn’t sleep for four or five days – asking myself why they made this decision,” he says.

Ali – who later worked for the EU’s police mission to Afghanistan – says he has no idea why the UK deemed him a security threat, but why Denmark allowed him to enter the country.

‘They will hang me’

Others have not been so fortunate.

After being told in June he was eligible to relocate within weeks, Ahmad took out a $7,000 (£5,000) loan so he could make it to Kabul and travel on to the UK to start a new life.

But on 16 August – just a day after the capital fell to the Taliban – he too was told he had been refused entry to the UK. Reading the Home Office letter, he says, was “the worst moment in my life”.

“I asked why many times,” he says. He wonders if he could have been deemed an extremist because of quotes from the Quran he has shared on Facebook, or because he hails from a Pashtun tribe that has traditionally had ties to the Taliban.

Ahmad decided to flee to Pakistan, taking a desert road to avoid Taliban checkpoints. When he made it to the border post, he managed to convince a Pakistani guard to let him through, claiming he needed medical treatment.

He made it to a Pakistani border town, but he is too scared to go outside. He says the Taliban have threatened his family, and he doesn’t know what to do next.

“When I surrender myself they will torture me, beat me,” he says. “Then they will hang me or shoot me.”