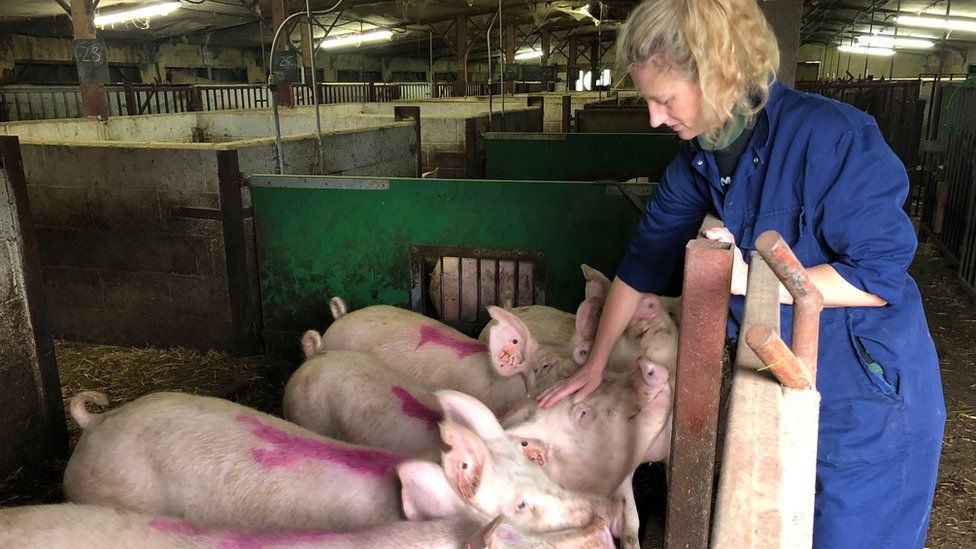 More than a third of people in UK farming could be suffering from depression, according to a new survey of wellbeing in agriculture.

The causes of stress include financial pressure, physical pain, the Covid-19 pandemic, regulations and bad weather.

The findings come as pig farmers are reporting distress at having to kill their animals due to a shortage of abattoir workers.

The lack of workers to slaughter and process the pigs is being blamed on a range of factors including Brexit and Covid.

The survey by the University of Exeter and the Royal Agricultural Benevolent Institution (RABI) spoke to 15,000 people in UK farming and is thought to be the largest of its kind.

Sophie Hope runs a poultry and pig farm in Witcombe, Cheltenham, that her grandad started in the 1930s. She says she has periods of feeling low and anxious, and shutting herself off.

The pressure of keeping the farm going for her young son and family, as well as 20 employees, also keeps her awake at night.

“It can be crucifying. Sometimes I don’t want to complain because I have a wonderful life here – it’s more the pressure of keeping it going long-term for myself and everyone who’s invested in the business.”

She says pig farmers are struggling, particularly at the moment: “I can see the anguish in people’s faces. I can feel the distress and the worry, and the uncertainty of when’s this going to end.”

The RABI survey was carried out before the shortage of abattoir workers became a problem in the UK. It found that specialist pig farmers were reporting the highest number of stress factors and rates of probable depression across all areas of farming.

By contrast, people in cereals and general cropping reported fewer causes of stress and 70% were likely not experiencing depression.

The most common cause of stress was reported to be regulation, compliance and inspection, followed by the pandemic. Covid has disrupted supply chains and the availability of workers as people changed jobs or left the UK, putting pressure on farms.

The rise in extreme weather is also causing serious concern with 44% of people calling it a significant worry.

Floods and periods of dry weather have caused serious problems for farmers in parts in the UK, including in Yorkshire and East Midlands in recent years.

Isolation and long hours also play a factor in poor wellbeing, and younger people reported higher levels of loneliness than across the general population.

“Mental health in agriculture is the elephant in the room. No-one really wants to talk about loneliness, anxiety or suicide but it’s there. This report has emphasised the need for the whole farming community to tackle the issue and encourage farmers to take notice, open up and talk to each other,” said Stephanie Berkeley from the Farm Safety Foundation.

The findings suggest that taking time off for a break or leisure, a common strategy to improve mental health, is not an option for many farmers. Almost one-third of respondents said they hardly ever or never leave the farm.

About 472,000 people work in farming across the UK, according to the Department for Environment, Food and Rural Affairs (Defra).