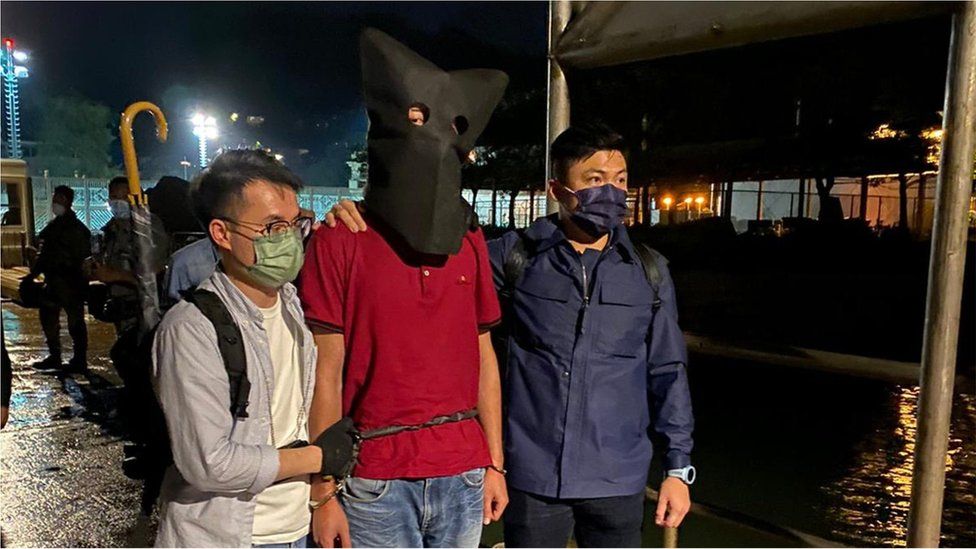 A friendly beer shared with a mysterious stranger has led to the arrest of a high-profile murder suspect in Hong Kong.

The suspect had gone on the run after he allegedly slashed a taxi driver to death, in a case that gripped the city.

Police put out an appeal for information with pictures of his face, and warned the public that he was an “extremely dangerous person”.

Violent killings are rare in Hong Kong, which has a low crime rate.

On Wednesday afternoon, a woman living on the sleepy island of Lamma came across him drinking a beer while sitting outside a shop, according to reports.

She did not recognise him at first, and the two struck up a conversation over drinks. The woman, who only wanted to be known as Tracy, told local media that he appeared to be a “lovely and gentle” man.

They parted ways as it started raining heavily when a typhoon passed through the area. That evening, Tracy went back to the shop and saw he had returned, completely drenched.

“I started to become concerned, [thinking] sir, hang on a minute, you are here all day, you are in wet clothes… it was just very strange,” she told South China Morning Post.

When he told her the neighbourhood where he lived, she started putting two and two together. “Suddenly I remembered reading something on the news. And that’s when I thought… is this him?” she said.

She rushed to her home, which was next door to the shop, to look up his photos online on her computer and realised who he was.

Tracy called the police, then went back downstairs to buy the man another beer to stall him. Officers eventually arrived to arrest him, who was reportedly calm and did not run away.

The man is accused of slashing the neck of a taxi driver, who eventually bled to death, on Tuesday.

Authorities warned the public that he was on the loose and was “extremely dangerous with a violent streak”.

Local media outlets reported that he had previously expressed a desire to imitate US-style mass shootings, had briefly stayed at a psychiatric facility, and appeared to believe in the “gang stalking” conspiracy theory.

“Gang stalking” sufferers believe they are “being followed, stalked, and harassed by a large number of people, often numbering in the thousands”, according to one study released in March.

The narrative tends to take hold among people who experience psychotic symptoms, according to a New York Times report on the phenomenon.