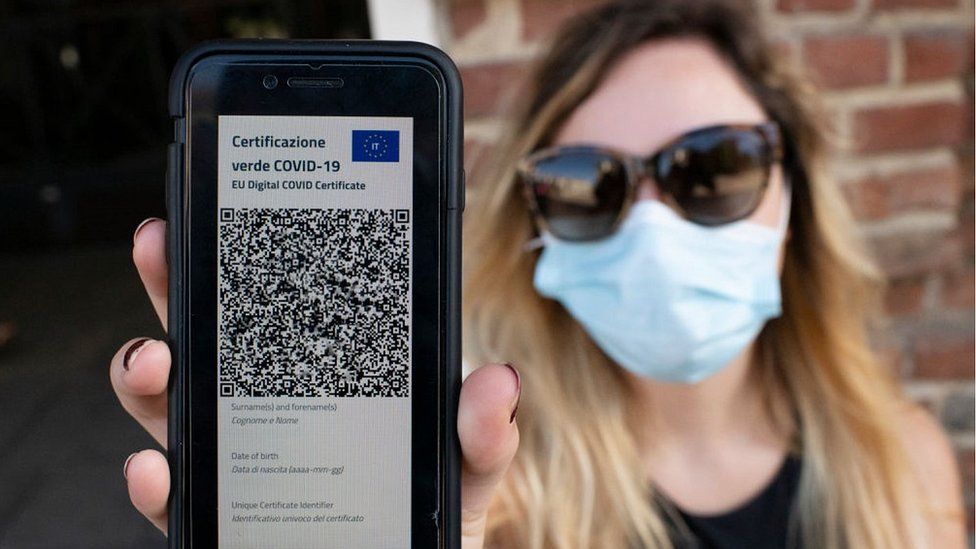 Italy’s Green Pass becomes mandatory for all workplaces on Friday, but there are fears of disruption among transport workers and at ports where Covid vaccination rates are relatively low.

While more than 85% of Italians aged over 12 have had at least one jab, about 2.5m Italian workers are estimated to be still unvaccinated.

The move to make the Covid pass compulsory for workers is among the world’s toughest anti-Covid measures.

And it is broadly a popular decision.

Two-thirds of Italians consider it necessary, according to an Ipsos opinion poll this week.

However, opponents rioted in Rome on 9 October. The far-right Forza Nuova party led violent protesters who vandalised the CGIL trade union building in Rome, during clashes with police.

Further protests are expected on Friday, with reports of workers planning to strike or not go into work.

At the northern Adriatic hub of Trieste, where only 40% of 950 workers are vaccinated, there are threats of a blockade and disruption to supply chains – as well as warnings of disruption to public transport in the industrial centre of Milan.

“It is time to stop the economy, which is perhaps the only way we can show this government that many people are struggling,” port workers’ spokesman Stefano Puzzer told Rai TV. “Many will remain without wages, purely because they exercised their free choice of not having the vaccine.”

The Green Pass, introduced in June, shows whether you have had the Covid vaccine, recovered from it or had a negative test. It is already required for teachers and other school workers, for access to bars and restaurants and for leisure venues such as cinemas and football stadiums.

Italy’s coalition government, led by Mario Draghi, is extending it in the hope of avoiding another lockdown, further boosting vaccinations and helping Italy’s recovery from last year’s severe economic slump.

Ministers have played down fears of chaos because of the high rate of vaccination.

But disruption could hit the transport sector too, as many lorry drivers are foreigners who are either unvaccinated or have had jabs not recognised by the European Medicines Agency. Umberto Ruggero of Italy’s logistics association said 30%-40% of staff might not show up. He spoke of a “perfect storm”, with the sector already suffering from chronic understaffing.

Dock workers in Trieste offered to call off their action if the government delayed making the Green Pass obligatory until the end of October, but that was rejected by Rome.

Business lobby group Confindustria strongly supports the Green Pass. Italy was the first European country to suffer a healthcare crisis in the pandemic, and has had more than 130,000 Covid deaths.

There are fears that Italy’s pharmacies may not cope with the pressure of providing many more Covid tests under the new regime.

Unions failed to secure free tests for workers – something also demanded by Matteo Salvini’s nationalist League, which is in the government.

The League’s Luca Zaia, governor of the heavily industrialised Veneto region in the north-east, warned that “we will not be able to grant a swab every 48 hours to all the unvaccinated”.

“The business people I am in contact with are extremely worried,” he said.