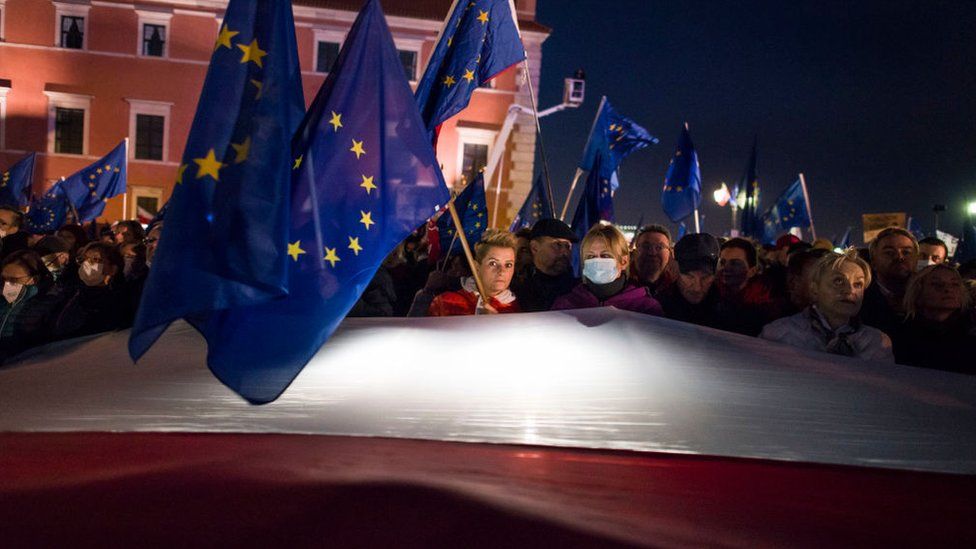 Poles backing EU membership have taken part in protests across the country, amid fears it could leave the bloc.

On Thursday Poland’s top court ruled that key articles of EU law were “incompatible” with the constitution.

It sparked fears that Poland could exit the union, prompting calls for major demonstrations nationwide on Sunday.

Organisers said protests took place in more than 100 towns and cities, with some 100,000 people turning out in Warsaw alone.

Donald Tusk, former President of the European Council and now leader of the opposition party Civic Platform, called on people to “defend a European Poland” at the rally in the capital.

Opposition politicians, activists and artists all took part in the demonstrations.

Reuters Wanda Traczyk-Stawska, a 94-year-old veteran of the Warsaw Uprising against the Nazi German occupation in 1944, spoke at one event.

“This is our Europe and nobody is going to take us out of it,” she said.

Leaders across the EU criticised the ruling by Poland’s Constitutional Tribunal on Thursday. In effect it rejected the core principle that EU law has primacy over national legislation in certain judicial areas.

This decision is the latest in an escalating row between the bloc and Poland.

Critics accuse the ruling Law and Justice (PiS) party of politicising the judiciary since taking office in 2015.

Poland’s Constitutional Tribunal is now dominated by judges sympathetic to the governing party. The European Court of Human rights alleges one of them was appointed illegally.

“We have the same rights as other countries. We want these rights to be respected,” he wrote on Facebook after the decision.

He also insisted however that “Poland’s place is and will be in the European family of nations”, and PiS has said it has no plans for what some are calling “Polexit”.