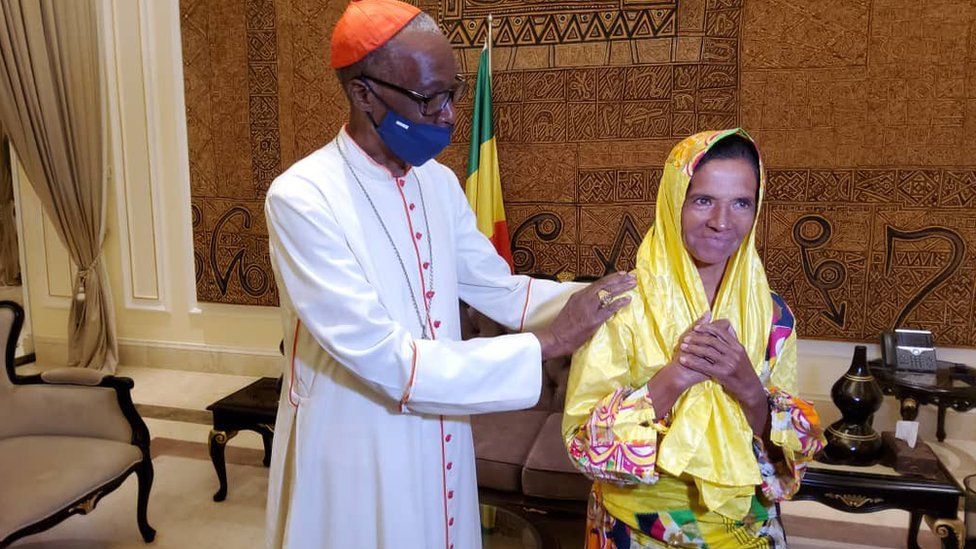 A Colombian nun kidnapped by Islamists in Mali four years ago has been freed.

Gloria Cecilia Narváez was taken hostage in 2017 while working as a missionary in Koutiala, about 400 kilometres east of the capital Bamako.

Photos posted by the Malian presidency on Saturday showed the Franciscan nun meeting with interim president Assimi Goita, dressed in yellow robes and a headscarf.

It is not clear whether a ransom was paid to secure her release.

A statement released by the president’s office said her release came after more than four-and-a-half years of “combined effort of several intelligences services”.

The Archbishop of Bamako, Jean Zerbo, also confirmed her release and told reporters that she was “doing well”.

“We prayed a lot for her release. I thank the Malian authorities and other good people who made this release possible,” he said.

There have been irregular reports of Ms Narváez’s safety over the years. Earlier this year, two Europeans who managed to escape captivity reported that she was well.

In March, her brother received a letter from her that confirmed she was still alive. He told AFP earlier this year that the note was written in block capitals “because she always used capital letters”, and contained the names of their parents, ending with her signature.

Mali has been struggling to contain a growing Islamist insurgency that first emerged in the north of the country in 2012. Kidnappings in particular have become more common in the former French colony as the security crisis has deepened.

According to the NGO, Armed Conflict Location and Event Data Project, more than 935 people have been abducted in the country since 2017.

However, Colonel Assimi Goita, who led a military coup that removed the country’s civilian government last year, has sought to assure Malians and the international community that efforts are under way to secure the release of all those still being held.

French troops have been leading operations against Islamist groups in the region since 2014, however President Emmanuel Macron announced in June that operations would be reduced over the coming year.

This has reportedly led to the Malian government turning to the Russian mercenary collective, the Wagner group for assistance. The secretive group has been involved in conflicts across Africa, including fighting with a rebel general, Khalifa Haftar, in Libya.