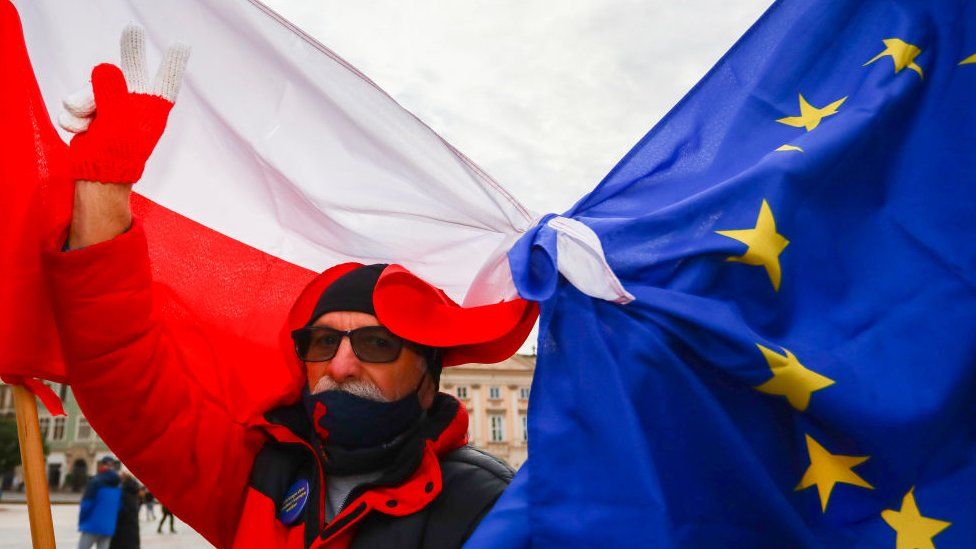 The unprecedented challenge made by Poland’s prime minister, Mateusz Morawiecki, to one of the European Union’s core legal principles has seriously escalated his government’s dispute with Brussels. And it has fuelled concerns that Poland is heading towards the door, described as “Polexit”.

France says such an exit is now a “de facto risk”. Late on Friday the French and German foreign ministers rebuked Poland, saying EU membership relied upon “complete and unconditional adherence to common values and rules” and this was “not simply a moral commitment. It is also a legal commitment”.

The European Commission has warned it will use all its powers against Poland.

On Thursday, Poland’s Constitutional Tribunal ruled that key articles of one of the EU’s primary treaties were incompatible with Polish law, in effect rejecting the principle that EU law has primacy over national legislation in certain judicial areas.

“In practical terms, this ruling introduces aspects of a legal Polexit because it will deepen the problem of judicial co-operation between Polish and European courts, in particular the mutual recognition of judgements,” Patryk Wachowiec, research fellow at the Bingham Centre for the Rule of Law told the BBC.

“I think they are trying to protect their reform of the judiciary.”

Mr Wachowiec said the prime minister had brought the challenge for protection against rulings from the EU’s top court over the past six years. These rulings had condemned the governing camp’s sweeping changes to the judiciary.

Mr Morawiecki was also seeking to stop Polish judges from using EU law to question the status of their colleagues appointed following those changes, he said.

The European Commission says the changes have undermined judicial independence and opened up the courts to political interference.

The Constitutional Tribunal was the first target of Poland’s Law and Justice (PiS) party’s reform. It is now dominated by judges who are sympathetic to the party, one of whom was appointed illegally, according to the European Court of Human Rights.

Both Mr Morawiecki and Poland’s most powerful politician, PiS chairman Jaroslaw Kaczynski, insist Poland wants to stay in the EU.

They accuse the country’s fragmented opposition of spreading “fake news” to frighten an electorate that overwhelmingly supports membership, even if more Poles now voice concerns about losing sovereignty to the EU.

They acknowledge membership has given Poland access to billions of euros to invest in projects that have visibly transformed the country’s landscape, as well as access to the single market.

Donald Tusk, the former European Council president and now head of Poland’s largest opposition group Civic Coalition, has urged Poles to protest against the ruling at a Warsaw rally on Sunday.

“The operation planned by Jaroslaw Kaczynski to remove Poland from Europe has started full steam ahead. If we remain inactive, nothing will stop him,” he said in a video posted on Twitter.

So if Poland’s leaders are adamant they do not want a “Polexit”, why are two of Mr Kaczynski’s long-term confidants, Marek Suski and Ryszard Terlecki, stoking anti-EU sentiments?

Last month Mr Suski talked about fighting the “Brussels occupier” and Mr Terlecki said the UK had shown that “the dictatorship of the Brussels bureaucracy” could be defeated by leaving.

Mr Terlecki, who is head of the ruling PiS party’s parliamentary caucus, insisted Poland wanted to remain but said “drastic solutions” would have to be sought if the conflict was not resolved.

Perhaps the party is preparing the ground for an eventual exit once Poland has to pay more money into the EU budget than it takes out.

Maybe it’s playing hardball to try to get the best possible compromise with Brussels.

Negotiations are ongoing and some suggest the government is using the ruling as leverage to get the plan agreed. The ruling does not take effect until it is published.

Although the government is legally obliged to do so, it has failed to publish rulings in the past.

Jacek Karnowski, editor-in-chief of the pro-government Sieci weekly, told the BBC that Polexit was “unimaginable and unrealistic”, although he said the topic was now a matter of discussion.

Poland, like the UK, was a proud independent nation, he said, but “much weaker, unhappily”.

The PiS mainstream believed Poland must defend its sovereignty and not be treated as a second-class member, he said.

He sees Brussels as the aggressor, overstepping its powers and inventing new tools to constrain Poland to roll back the reforms.

“Government officials feel they are being cheated by Brussels. Thursday’s ruling was decided in some sense by the EU’s position,” he said.

In his opinion Brussels has set Poland a trap.

“There is a possibility that Poland will be pushed out of the EU because we can already see that we are being pushed out.”

He says Warsaw is being offered a choice of either being a “legal colony” of Brussels or of leaving the EU.

“If the government were to say we want to leave, there would be a change of government, so it’s a trap set by Brussels.”