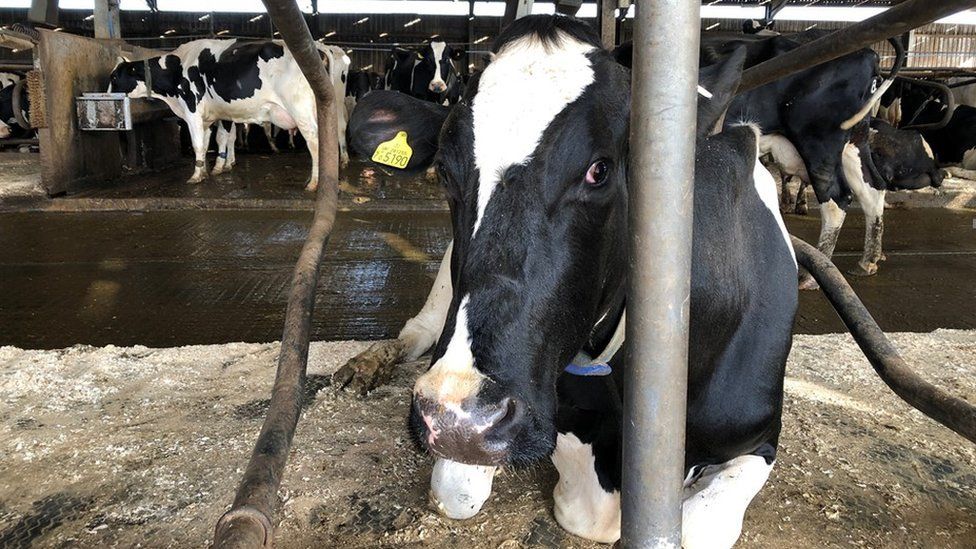 Tests in the UK have shown that artificial lightning can strip pollutants from animal manure.

The technology entails firing a bolt of plasma at slurry to break up toxic ammonia and climate-heating methane.

The artificial lightning is plasma – a stream of matter heated so hot that electrons are ripped away from the atoms and molecules break down.

The action smashes ammonia molecules to produce pure nitrogen, which is absorbed into farm slurry.

That saves the farmer money because nitrogen applied to fields in slurry is an essential fertiliser.

A plasma gun has been firing at cow dung on the dairy Holly Green Farm, in a picturesque part of Buckinghamshire.

Independent assessors at the consultancy ADAS told BBC News that it reduces ammonia in slurry by 90%.

The plasma process also reduces the emissions of methane – a potent greenhouse gas – by 99%.

If the technology proves affordable it wouldn’t just tackle climate change and improve the smell of the countryside, it would also present an opportunity to tackle air pollution in urban areas.

That’s because clouds of farmyard ammonia often drift towards cities when they react with other chemicals to form tiny particles that are breathed deep into people’s lungs.

Particulates have a host of sources including exhausts from vehicles and gas boilers; paints; cleaning fluids; tyres and brakes – and the World Health Organisation recently warned that their health effects are even worse than previously thought.

So eliminating ammonia from the pollution recipe would be a helpful step.

In an equipment-filled shipping container at the farm I tried a before-and-after-plasma sniff test of the slurry – like taking the bouquet of a bottle of wine.

The ‘before plasma’ sniff knocked back my nose in typically pungent fashion.

The ‘after plasma’ sniff was neutral at first, but then the bouquet took on a clean and faintly uplifting smell of the seaside.

Farmer Neil Dyson is delighted with what he describes as a triple win. He told me: “It will tick lots of boxes. It will reduce our carbon footprint by cutting emissions of methane; it will help with the Clean Air Act by removing ammonia; and by locking nitrogen into the slurry it improves the quality of the slurry so it should allow us to reduce our need for artificial fertiliser”.

The backers of the plasma system, a privately-owned Nordic firm called N2 Applied, said it could play an important role in the drive to cut emissions from farming.

There are already experiments to prevent cows burping methane through additives to their feed. Many farmers are also turning to anaerobic digesters in which bacteria release the methane from slurry and use it to burn for power.

But Dr Rachel Thorman from ADAS told BBC News: “The UK has legally binding ammonia reduction commitments and the projections are that the target reductions will not be met. Anaerobic digestion doesn’t reduce ammonia emissions – but the plasma system does.”

The big question is the cost of the electricity that produces the bolt of plasma. At Holly Green Farm it’s produced by an array of solar panels.

But the question will be who pays for farmers to clean up. The government hasn’t yet revealed how it will reward farms for protecting the environment as part of its strategy for reforming subsidies.