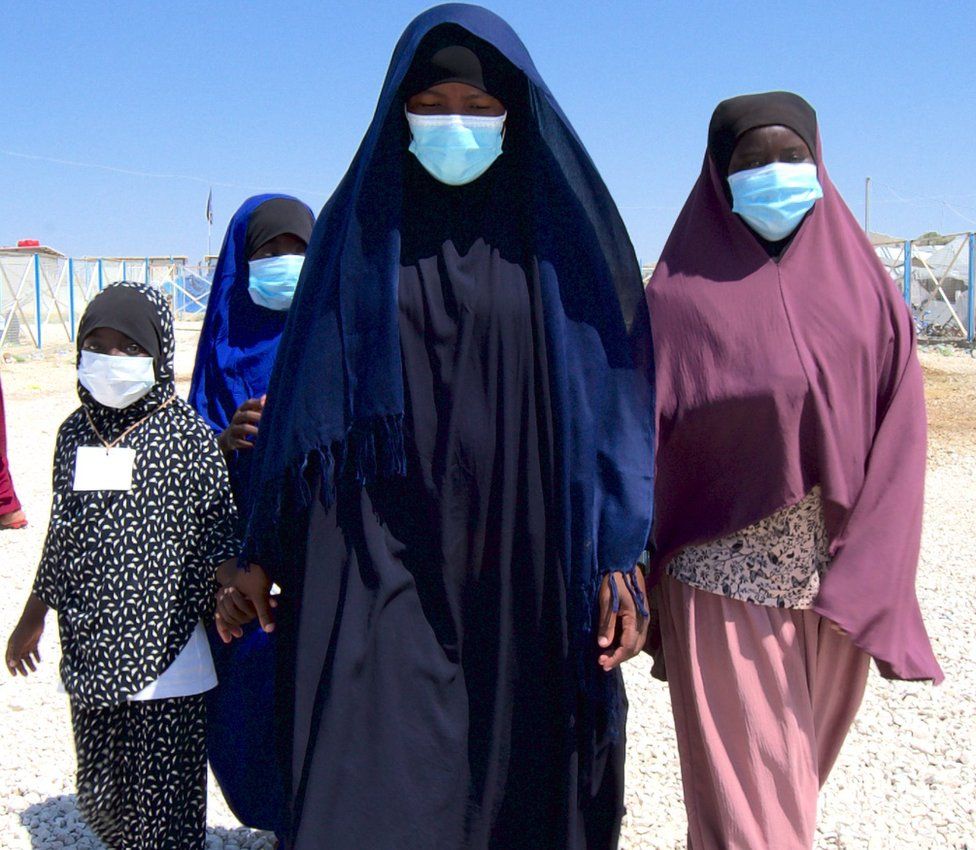 A British woman who joined the Islamic State group with her young children has said UK politicians should “open your minds” to allowing them to return.

Nicole Jack and her three daughters are currently being held in a detention camp in Syria alongside thousands of wives and children of IS fighters.

She said they are “out of sight, out of mind” and the UK government must not sweep them “under the carpet”.

The Home Office said its priority is to ensure the UK’s safety and security.

Ms Jack and her daughters – aged 12, 9 and 7 – are currently in Syria’s Roj camp, where Shamima Begum is also being held.

Speaking publicly for the first time, the 34-year-old told the BBC that despite living under IS rule for three years, she was not a security risk to the UK.

The UK government has been unwilling to let those who joined IS – a group that committed genocide and murder around the world – back to the UK, viewing them as potential national security threats.

Ms Jack left London with her husband and her then four young children to join IS in October 2015. She had told relatives her family was leaving for Somalia to start a new life.

IS had already become notorious for its brutality, including public beheadings, before she joined the group. And unlike some recruits from the UK, who joined as teenagers, she was an adult when she left.

She told the BBC few people will understand her decision to take her children to a dangerous warzone and live under IS rule.

When pressed for an answer, she said her husband, Hussein Ali, threatened to split the family up if she refused to travel with him. “It was about my family being together”, she claimed.

‘He’s in a better place’

But the following year her husband died fighting for the militant group.

She then remarried, to another foreign IS recruit – Trinidadian fighter, Adil de Montrichard – who went on to die in an airstrike, which also killed her 10-year-old son, Isaaq.

She says she coped with the death of her son by “knowing that he’s in a better place”. “Anything else can put us on the verge of a breakdown and this is what I can’t risk,” she added.

When asked about the group’s brutality, she says she was not witness to its worst crimes. She told the BBC: “I haven’t seen a beheading in my life.”

The BBC also spoke to her 12-year-old daughter, who we are not naming. She said she “misses her grannies and aunties” and hopes to return to the UK so she can “go to school and make friends”.

The children, who were born in London, attend a makeshift school in the camp, run by Save the Children.

“I like learning different things, like different languages,” the 12-year-old said. “When you learn more things, your brain becomes better and all these kind of things. I want to be smart when I grow up.”

There are estimated to be at least 16 British women and between 35 and 60 British children detained in Syrian camps, according to international advocacy groups.

Many of the women in the camp – including Shamima Begum, who left the UK aged 15 with two other east London schoolgirls – have been stripped of their British citizenship.

However, international charities are pushing governments to take back more of the children. Ms Jack, who has British and Trinidadian nationality, says she does not know if her citizenship has been removed.

But she insists she is not prepared to allow her children to return to Britain without her. “I know for sure if my kids are separated from me they will not be in a stable situation, because we are a unit.”

Thousands of miles away in London, the children’s grandmother, hospital nurse Charleen Jack Henry, says the children should be allowed to return.

“It is not fair and it is not right for these children to be languishing in this place,” she said, adding that Ms Jack should also be allowed back to “face the consequences” in the UK.

Britain has said it is willing to repatriate orphans and unaccompanied children.

Kurdish authorities responsible for managing prisons and camps in north-east Syria have repeatedly urged Western governments for support in dealing with foreign IS fighters, as well as their wives and children. They want countries to repatriate their own citizens.

Some countries, like Sweden, Finland, Belgium and Germany, have brought back children and their mothers.

Meanwhile, Save the Children says violence and illness are a daily risk for children living in Syrian camps.

“These children are experiencing traumatic events that no child should have to go through – and this is after years of living in conflict zones,” Sonia Khush, director of the charity’s Syria response team said. “It is incomprehensible that they are condemned to this life.”

The UK government wouldn’t comment specifically on Nicole Jack’s case, but said: “Our priority is to ensure the safety and security of the UK.”

It said those who remain in Syria “include dangerous individuals” adding: “It’s important that we do not make judgements about the national security risk someone poses based on their gender and age.”