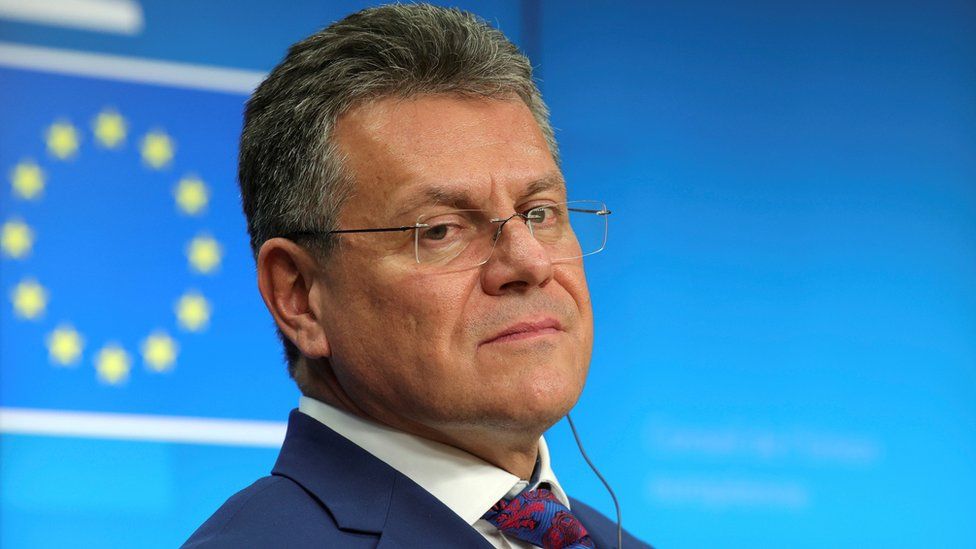 He said he hopes they would form the basis for intensive talks with the UK.

The protocol avoids a hard border on the island of Ireland by keeping Northern Ireland in the EU’s single market for goods.

But unionists argue it creates a trade border between Great Britain and Northern Ireland.

They say it undermines Northern Ireland’s constitutional position as part of the UK.

Mr Šefčovič told an event in Dublin that he hoped talks would begin before the end of October.

He said his proposals would be “very far reaching” and that he hoped they would be seen as such.

Sir Jeffrey Donaldson, the leader of the Democratic Unionist Party (DUP) – Northern Ireland’s largest unionist party – had warned that it may quit Stormont if its demands over the protocol were not met.

Mr Šefčovič said the EU was going to “enormous lengths”.

“I believe the package of practical solutions that we are putting on the table would be attractive for Northern Ireland and would be, I hope, supported by a majority of stakeholders in Northern Ireland,” he told the Institute of International and European Affairs (IIEA) in Dublin.

He said the commitment of the EU to the Good Friday Agreement was “absolute” and that the avoidance of a hard border on the island was a “prerequisite”.

He told the Conservative party conference that the protocol was “not working and needs to change”.

In July, Lord Frost put forward radical proposals for changes to the protocol.

Triggering Article 16, which would suspend part of the deal, may end up as “the only way” forward, he warned.

Mr Šefčovič said threats to trigger Article 16 were not helpful.

He said his proposals were not presented on a “take it or leave it” basis and that both the UK and EU would need to get out of their comfort zones.