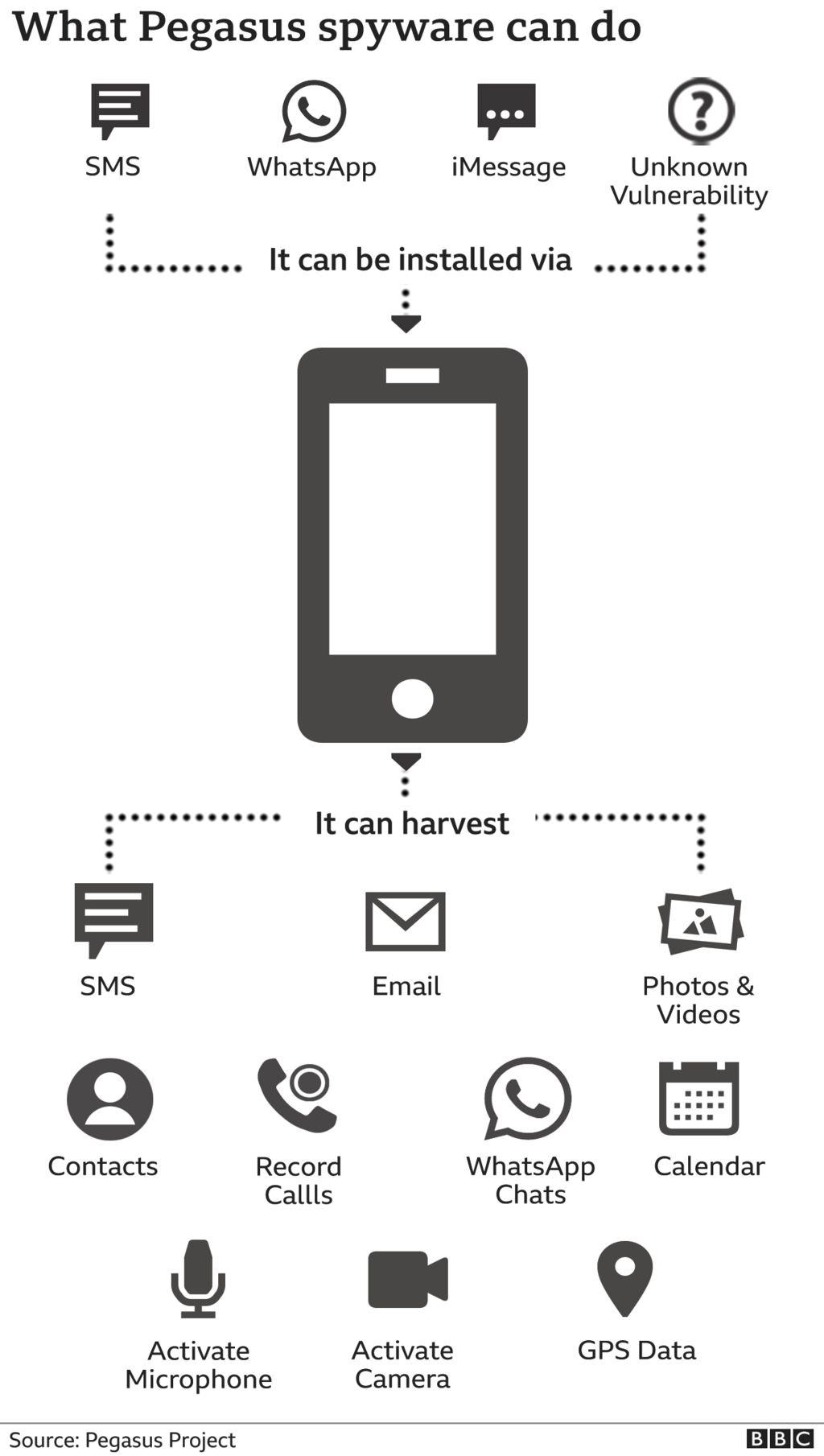 The High Court has found that the ruler of Dubai, Sheikh Mohammed Al Maktoum, interfered with British justice by ordering the hacking of the phone of his ex-wife, Princess Haya of Jordan.

The phones of her solicitors, Baroness Fiona Shackleton QC and Nick Manners, were also targeted during their divorce custody case, according to the court.

Princess Haya said the discovery had made her feel “hunted and haunted”.

Sheikh Mohammed denied any knowledge of the hacking.

He said the court’s findings were based on evidence that was not disclosed to him, and that they were “made in a manner which was unfair”.

The judgments are a blow to the sheikh and a further revelation as to his treatment of female members of his family.

The High Court judgments, which were published on Wednesday afternoon, referred to the hacking as “serial breaches of (UK) domestic criminal law”, “in violation of fundamental common law and ECHR rights”, “interference with the process of this court and the mother’s access to justice” and “abuse of power” by a head of government.

The president of the Family Division of the High Court found that “the mobile phones of the mother (Princess Haya), two of her solicitors, her personal assistant and two members of her security staff had been the subject of either successful or attempted infiltration by surveillance software. The software used is called Pegasus software and was that of an Israeli company, the NSO Group.”

The extent of the hack is shocking in what data it gave the hackers access to.

NSO’s Pegasus software, often referred to as “spyware”, is able to track the location of the individual using the phone, read their SMS messages, emails and messages in other apps, as well as eavesdrop on their phone calls and access their contact list, passwords, calendar dates and photographs. In other words, it gives the hacker complete access to all the data they want to see in their target’s phone.

It also allows the hacker to activate the target’s phone without their knowledge, recording their activity and even taking photographs and screenshots.

Similar spyware is alleged to have been deployed by Saudi government agents, working on the orders of the Crown Prince Mohammed Bin Salman, against dissidents living abroad, including associates of the murdered Saudi journalist Jamal Khashoggi.

It is extremely difficult for a victim of such spyware to even detect that their phone has been infected with Pegasus.

In the ongoing custody case between Sheikh Mohammed and Princess Haya at the Family Division of the High Court, her legal team said the hacking took place with his “express or implied authority”.

The president of the court concluded that “in relation to the mother (Princess Haya), it is clear that the [hacking] attempt succeeded with a very substantial amount of data (265MB) being covertly extracted from her phone”.

Sheikh Mohammed denied any knowledge of the hacking and said he did not instruct anyone to use NSO “or any software in this way”. His legal team said he was not prepared to enter into any debate in relation to what security systems the UAE might have.

The allegations against Dubai’s ruler were supported by testimony given by an expert technology witness, Dr William Marczak, who is based in California and is a senior research fellow at the University of Toronto’s Citizen Lab, which researches digital surveillance.

Princess Haya’s legal team first became aware that they had been hacked after an urgent phone call made by Cherie Blair QC, the wife of former UK Prime Minister Tony Blair, to Baroness Shackleton. Mrs Blair acts as an adviser to NSO Group on business and human rights related issues.

A senior member of NSO’s management team called Mrs Blair from Israel on 5 August 2020 to inform her that “it had come to their attention that their software may have been misused to monitor the mobile phones of Baroness Shackleton and HRH Princess Haya”.

The NSO staff member then told Mrs Blair that those phones could no longer be accessed using NSO software and they asked for her help in contacting Baroness Shackleton.

NSO, which has previously been accused by human rights groups of enabling autocratic states to carry out intrusive surveillance of dissidents and journalists, has insisted in public statements that it only supplied its spyware to enable governments to counter criminals and terrorists.

NSO is believed to have terminated its contract with the UAE.

‘Living in fear of her life’

The hack took place during a critical phase in Sheikh Mohammed and Princess Haya’s divorce custody case at the High Court in the summer of last year.

The guardian appointed for her children said it “impacts crucially on the mother and her wellbeing. It is a very pernicious experience if the mother has been subjected to surveillance of the type that she understands that she has been”.

Princess Haya’s legal team told the court that “the mother has been living in fear of her life frankly, and in fear of the children’s security since April of [2019]”.

The court also heard how Sheikh Mohammed had attempted to buy a property in Surrey, Parkwood Estate, so close to his ex-wife’s home at Castlewood, that “if anyone chose to use it, it is in prime position for direct or electronic surveillance”.

Her legal team said “there is a powerful objective case as to why the mother should be genuinely in fear if the father has access to a property overbearing her own”.

Referring to the proposed property purchase, Princess Haya told the court: “It feels as if I am being stalked, that there is literally nowhere for me to go to be safe from (the father), or those acting in his interests. It is hugely oppressive.”

The court also found proven allegations that he kidnapped and forcibly returned to Dubai two of his own daughters, Sheikha Latifa and Sheikha Shamsa.

This February, BBC Panorama obtained secretly filmed footage of Sheikha Latifa saying she was imprisoned by her father in a villa converted into a jail.

She recounted how she had attempted to escape her family by boat in 2018 but was recaptured by armed men off the coast of India, tranquilised and forcibly returned to Dubai.

The UN later demanded to see proof she was alive and well.

Photographs have since been posted on social media showing her accompanied by female friends in a Dubai mall, and holidaying in Madrid and Iceland.

Human rights campaigners remain suspicious that she is still not at liberty or able to speak freely.

A law firm saying it is acting on her behalf has asked the media to leave her alone.

During the recent hearings in the High Court, Princess Haya’s legal team said that previous abductions were made possible by hacking, which “enabled the identification of the whereabouts of Princess Latifa and she was then rendered back to Dubai”.

Princess Haya, a daughter of the late King Hussein of Jordan and half-sister of King Abdullah II, fled Dubai in 2019 for Britain along with her two children after learning that her husband had ordered the abduction of Sheikha Latifa and Sheikha Shamsa.

She has since said she is living in fear of her life after receiving threatening messages from agents of her former husband.

Now her legal team is accusing agents of the Emirate of Dubai of acting on his behalf in hacking the phones of Princess Haya, her solicitors, Baroness Shackleton and Nick Manners, as well as her personal assistant and two members of her security staff.

The hacking took place in July and August 2020 “at a time of significant events” in the court proceedings when hearings were taking place over the welfare of the children.

The judgment concluded that “the allegations of hacking came before the court at a time when it had already made very serious findings against the father”.

During the long-running custody case at the High Court, Sheikh Mohammed has tried on several occasions through appeals to keep details of the allegations against him out of the public eye. But both in March 2020 and now, in October 2021, they have been made public, although he did not seek to appeal the most recent order permitting publication of these judgments.

Wednesday’s ruling that, despite his denials, a sovereign ruler has interfered in the course of British justice by ordering the hacking of UK phones, including of a member of the House of Lords is both shocking, embarrassing and damaging to Sheikh Mohammed’s international reputation.

Summing up the hacking allegations made by Princess Haya, her barrister Nicholas Cusworth QC told the court: “It is now clear, essentially, that the mother is engaged in a terrible game, a terrible life or death game of grandmother’s footsteps in the dark. While she seeks answers about property purchases, hackers apparently get to work interfering with her privileged communications.”

After the publication of the judgments Sheikh Mohammed said in a statement: “I have always denied the allegations made against me and I continue to do so. These matters concern supposed operations of state security.

“As a head of government involved in private family proceedings, it was not appropriate for me to provide evidence on such sensitive matters either personally or via my advisers in a foreign court.”

He added: “Neither the Emirate of Dubai nor the UAE are party to these proceedings and they did not participate in the hearing. The findings are therefore inevitably based on an incomplete picture.

“In addition, the findings were based on evidence that was not disclosed to me or my advisers. I therefore maintain that they were made in a manner which was unfair.”

Embarrassing as this is for Sheikh Mohammed, there is little or no prospect of his ever having to face any police questioning.

As Dubai’s sovereign ruler, he remains a huge figure in the equestrian world, he owns extensive properties in the UK and has been photographed with the Queen at race meetings such as Ascot. The emirate of Dubai is home to around 100,000 British expatriates and both he and the wider UAE government are considered close allies of the UK.

The story is unlikely to get much coverage in the government-monitored media in the UAE, and here in London the UAE Embassy has declined to comment on the case, saying it is a private family matter.

The sheikh himself has sovereign immunity from any future potential prosecution.