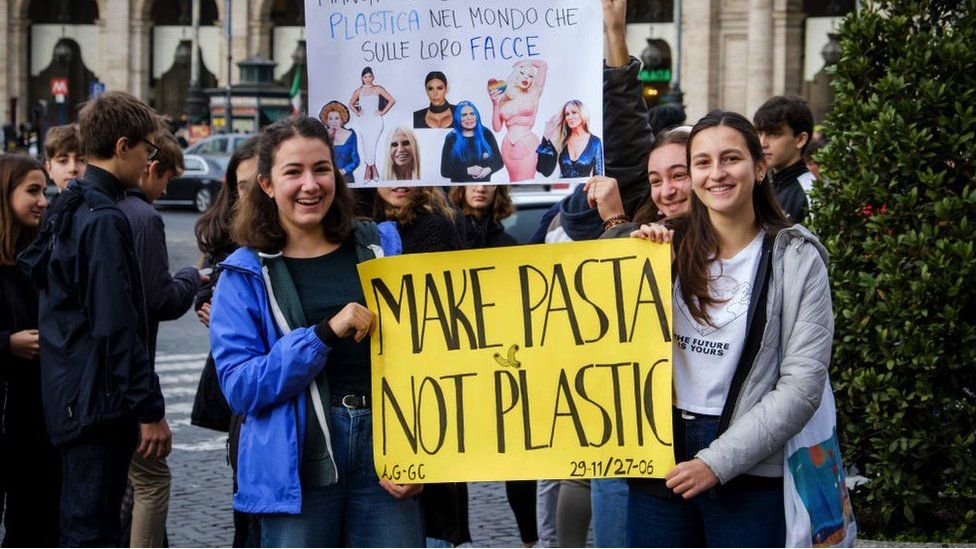 “It’s a kind of hopelessness I guess. Helplessness,” says Ross Simpson, 22, from Glasgow. He’s telling me how he and his friends feel about stopping the worst effects of climate change.

The warnings keep coming of more heatwaves, droughts, floods, and global temperatures going up and up and up. Seeing so many negative stories in the news only makes Ross feel worse. Like many, he worries it’s already too late.

“What difference does changing your lifestyle actually make in the grand scheme of things? Why do anything, if we’re all doomed anyway?”

Noor Elmasry, 22, has been having similar conversations with her friends across the Atlantic, in Chicago. “I think a lot of the frustration manifests from seeing people in power just constantly disappoint you,” she says.

Their feelings are shared by young people around the world. In a recent survey, 10,000 young people were asked about climate change. Three quarters said the future of the world was frightening, while more than half said they thought humanity was doomed.

Feelings of fear, shame, guilt, anger and frustration have been given a name: climate anxiety. And it’s on the rise.

So what can you do if you’re worried the planet is doomed? The BBC asked a group of scientists who have been working on climate change for years about what worked for them.

Do something, even it it’s small

Repeatedly, scientists said taking action in their own lives helped to ease their anxieties.

Many were proud of the scientific work they had been part of, but some also spoke about doing simpler things: recycling, eating a plant-based diet, insulating their homes, going on marches and engaging with politics.

Dr Nana Ama Browne Klutse, a scientist who contributed to a major report on climate change this year, said she occasionally planted mango saplings by the roadside.

Would it save the world on its own? No. Did it make her feel a bit better? Yes.

Some people might become activists because they’re really angry and they want to shake things up. Great, we need that. Others could be artists and want to share how they feel

He says action is the antidote that works for him, and points out that it can take many forms.

Dr Natalie Jones, a specialist in existential risk at the University of Cambridge, found relief in being alongside like-minded people at protests, rallies and other events.

“It’s an atmosphere you can’t beat,” she says. “As soon as you meet other people who have the same concerns, you’re like, ‘okay, I would much rather be here’.”

The choice for her is often between “doomscrolling” – staring at a phone or computer and dwelling on negative news – or working on solutions with like-minded people.

“Everyone’s in the same boat, right? So there’s a huge amount of solidarity,” she says. “I got a lot of meaning by knowing what we’re doing might really change things.”

She says the pandemic has made that hard for many people, but adds: “I really hope that people can feel like they can start that stuff again.”

You will have good and bad days

Almost all the scientists shared stories about coming to terms with how they felt about climate change. “I’ve felt terrified,” says Dr Jones.

I don’t know how to process thoughts and feelings without writing them down. The main thing is getting it all out of your head

“We’ve all been there,” Dr Jones adds. “Everyone who works on climate has been there. For me that was like 10 years ago. You have to acknowledge these things and come to some level of acceptance.”

But what does acceptance actually look like? Dr Jones says she spoke to friends and a counsellor. She continues to keep a journal to write down her feelings.

“For me, I don’t know how to process thoughts and feelings without writing them down. The main thing is getting it all out of your head. If it stays there it just turns into a big unhelpful stew.”

Caroline Hickman has studied the impact on climate change on the mental health of young people and helped lead the survey of 10,000 young people.

“We need to pay attention to how we feel and to process these complex feelings and support others in dealing with how they feel, as we take action in world,” she says. “Otherwise, there’s a high risk of burnout, because we’re tired.”

She says feelings of anxiety are normal. “It’s an emotionally, mentally healthy response to feel anxiety, dread, despair, depression in relation to the climate emergency.”

Yet many of the scientists had a stubborn optimism that comes from working on the problem. You will have good days and bad days, Dr Foley says.

“Maybe that’s how you feel some days,” he says when I ask him about feeling down. “But I hope you come back and maybe roll up your sleeves and see that actually maybe doom isn’t guaranteed.”